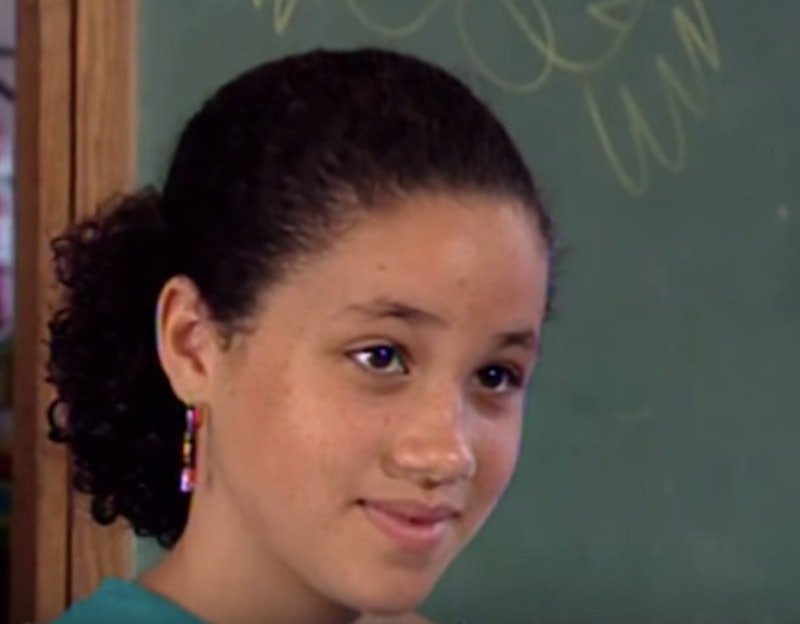 Inside Edition/YouTube
By Stephanie Downs
Dec. 1, 2017

Ever since Meghan Markle and Prince Harry's engagement was announced on Monday, there's been a plethora of new information that's come out concerning the American actor. As the Huffington Post reports, an interview was recently unearthed by Inside Edition that shows 11-year-old Meghan Markle speaking out about sexism in TV ads. Yeah, she's basically been an inspiration for years. Even this interview from when she was just a tween is a great sign that the future royal will make the most of her heightened platform and help make the world a better place.

Inside Edition uncovered an interview Markle did with Nick News in 1993. Markle was interviewed after her class was tasked to look into commercials for their messages. Markle described how she took issue with a television ad for Ivory dish soap because the it specified that "women all over America" were using the cleaning product. "Wait a minute, how could somebody say that?" 11-year-old Markle said in reference to how the advertisement is only geared toward women. The assumption here being that only women were cleaning dishes and using the product.

Young Markle decided that she didn't want to stand by and allow commercials to air this kind of message. She wanted to challenge the message within this advertisement and challenge some stereotypical gender roles in the process. So, she wrote to Proctor & Gamble, which produced the Ivory product, and said, "So I was wondering if you would be able to change your commercial to 'people all over America?'" And guess what? While it's not confirmed that Markle was the reason why, Proctor & Gamble may have listened because they did end up changing their commercial to say, "People all over America," just like what Markle suggested.

At the end of the clip, Markle gave some advice to others who want to create change and her sincere and astute words are definitely ones to live by: "If you see something that you don't like or [are] offended by on television or any other place, write letters and send them to the right people and you can really make a difference for not just yourself but lots of other people."

It's so amazing that, even at such a young age, Markle expertly noted how important it is to be active in making the change you want to see in the world. She's been inspirational and all-around awesome for years!

Markle spoke about her early activism in a speech she gave at a U.N. Women event in 2015. According to the Washington Post, she became a U.N. Women's Advocate for Political Participation and Leadership in 2014. In her speech, she said that after viewing Ivory's advertisement, she wanted to do something to help change their message. She not only wrote to Proctor & Gamble, but also to attorney Gloria Allred, Linda Ellerbee, who hosted the Nick News program that interviewed her when she was young, and the first lady at the time, Hillary Clinton, because she wanted to reach out to those who could potentially help in changing the ad. (In the video below, she talks about the situation starting around minute 1:35.) Markle says that Allred, Ellerbee, and Clinton all responded.

Of course, as the Inside Edition video shows, she did succeed in altering their targeted message. By changing their message, they helped to break down those stereotypical gender roles within their marketing campaign and Markle had a hand in that. Her tenacity at such a young age only shows her eagerness to make the world a better place, not only for herself but for everyone.

In her BBC News interview with Prince Harry, following the news of their engagement, the two described how they bonded over their mutual interest in philanthropy and how eager they are to work on their shared interests together. Harry said, "We hope to, over time, have as much impact for all the things that we care about as much as possible," a statement that Markle agreed with. "I'm excited about that," she added. With her new royal role, she certainly has the means to help inspire change.

It looks like Markle is already heeding her own words and is helping to make a difference in the world, thanks in part to her new role. She went on her first royal engagement with Harry on Friday, and the couple appeared at a charity fair to mark World Aids Day, according to The Daily Beast. With her new status as a future royal, she has an even bigger platform to make a difference. And if this latest uncovered interview is any indication, Markle will certainly do everything she can to make that positive change in the world.

More like this
Sandra Bullock, Girlboss Extraordinaire
By Matt Harkins & Viviana Olen
Spice Girls’ Net Worth: The Richest Member Is Wealthier Than The Rest Combined
By Hugh McIntyre
Prince Harry & Meghan Will Attend The Queen’s Platinum Jubilee With Their Children
By Sam Ramsden
Pete Davidson & Kate McKinnon Are Part Of A Reported Major SNL Cast Shakeup
By Brad Witter
Get Even More From Bustle — Sign Up For The Newsletter