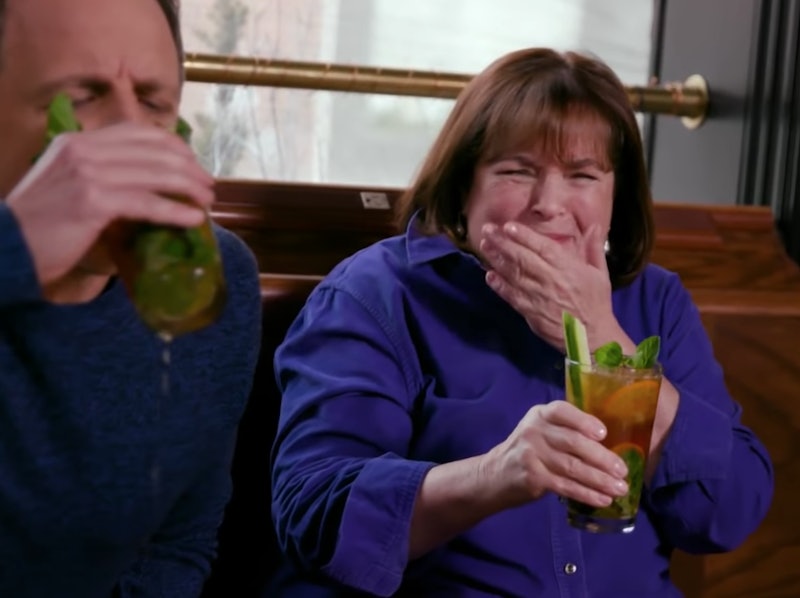 Can you imagine getting drunk with the Barefoot Contessa herself? Well, Seth Meyers went day drinking with Ina Garten, and he has never been luckier. They spent the afternoon at The Corner Bistro in New York, where as the Late Night with Seth Meyers host explained, "We are going to have a refined afternoon of good conversation and some libations beginning with a Pimm's Cup." Meyers started off the day by trying to down the fruit-filled cocktail as quickly as possible, which had the Food Network star declaring, "I'm in big trouble."

Garten had no idea how committed Meyers was to day drinking, because by the end of the drinking extravaganza, he was trying to write, "Happy birthday, Ina," on the bar countertop with icing. Yeah, that's how memorable of a time the comedian and chef had together.

The segment started off with the newfound drinking buddies making cocktails from Garten's very own recipes in an attempt to prove that Meyers could "make them just as well." Yeah, he didn't. For example, rather than measuring ingredients, unlike Garten who even brought her own measuring cup, Meyers just chose to "eyeball" it and even came up with his own measuring system that went like this: "1, 2, 3, 4, this is how you count a half cup."

To show you exactly how terrible Meyers was at making cocktails, here he is trying to separate an egg yolk from an egg white:

After the competition, in which Meyers ended up ruining Garten's favorite cocktail, a Whiskey Sour, they moved onto the Barefoot Contessa star quizzing Meyers on dips, sauces, and gravy. The game involved Meyers having to guess which condiment was hers. For the dip, Meyers had to taste the Barefoot Contessa mustard horseradish dip and Arby's horsey sauce. He actually didn't do horribly, but the real highlight was when Garten hilariously declared, "Waa!", after tasting Arby's horsey sauce. As Meyers asked her, "Are you too good for Arby's?"

The next hilarious game was Garten had to match celebrities' bare feet to their photo, because, you know, she's the Barefoot Contessa. Get it? Later on, Meyers even had her guessing which famous chef said a particular quote, and let's just say she rocked it so hard that Meyers ended up taking a lot of shots and got even drunker.

As hilarious as all of the above was, one of the funniest parts was when Garten tried to tell Meyers a story about her husband, Jeffrey Garten, and he didn't want to hear it. The late-night host joked, "Can we not talk about Jeffrey?! Oh my god! Jeffrey, Jeffrey, Jeffrey!"

The first time Meyers went day drinking with a celebrity was last February with Kelly Clarkson. If you haven't watched that video yet, you definitely want to take a moment to do so, because they were beyond hilarious. Who knew celebrities going day drinking with Meyers could be so entertaining?

As for Garten and Meyers, be sure to watch the above video in its entirety. It will put a smile on your face and the fact that Garten giggled the entire time, well, her laughter will improve your day immensely. Now, who else wants to go day drinking with Garten and Meyers? Same.