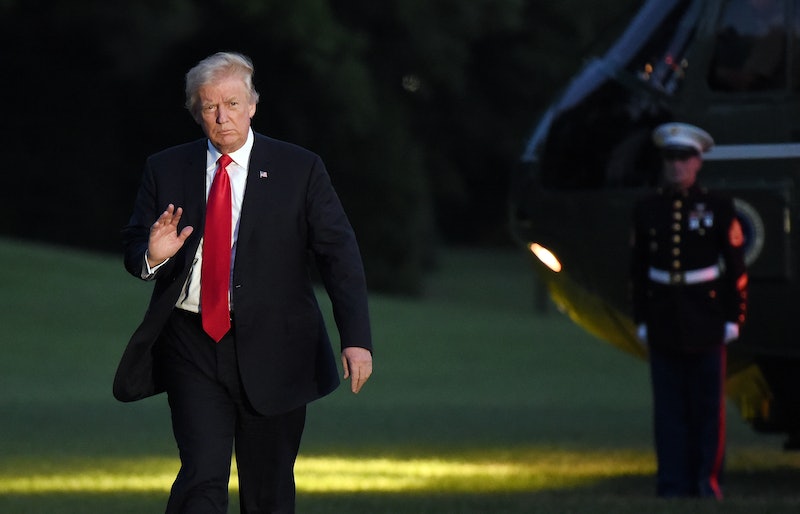 Forget scandals with Russia or the spotlight on American decline at the G-20 — there's a new headline to take the country by storm coming from the Trump White House, and it's surprisingly positive. A video caught President Trump chasing a marine's hat after it blew off in the rain, and even his greatest detractors must admit that the commander-in-chief handled the situation pretty classily.

Trump was en route to D.C., about to board Marine One at Andrews Air Force Base in Maryland, when all of a sudden the hat of the marine standing to the left of the stairwell blows off in the president's direction. He leans over, grabs the hat, and then tries to position back on the man's head — simultaneously patting him on the shoulder vigorously as Trump tends to do. As soon as the president lets go of the hat, though, the white, brimmed hat flies off at warp speed.

Looking at the president's clothing, it's easy to see the kind of windy situation they were dealing with. Not only is his red tie flying about, but his suit jacket too is blowing wildly in the wind as he approaches the marine. After the failed second attempt, Trump gave the hat to another military official standing nearby, rather than try again.

The relatively positive news could not come at a better time for Trump. His showing at the G-20 meeting in Hamburg, Germany, did not allay fears about his foreign policy chops. In fact, the international gathering ended with a public admonishment from German Chancellor Angela Merkel: "Unfortunately — and I deplore this — the United States of America left the climate agreement, or rather announced their intention of doing this," Merkel told those gathered.

Meanwhile, domestically, allegations are coming out regarding a meeting between Donald Trump, Jr. and a lawyer connected to the Kremlin. The lawyer reportedly offered damning evidence about Hillary Clinton that would have been helpful for the campaign; Trump, Jr., has said the offered information was "vague, ambiguous and made no sense." Given that position, Trump's team must be pleased for the positive recognition — even of something relatively trivial.

Sarah Palin took to Twitter to write "Thank you President Donald J. Trump," made complete with an American flag emoji, heart emoji, and thumbs up. Other conservatives on the social media site compared the situation to when a marine held an umbrella for President Obama — as a kind of chivalry test for the two presidents.

Still, not every comment online was positive, with one user calling it the last stop on a "Trump embarrassment tour"; however, those voices were few and far between.

Now it may have just been a natural reaction in such a situation, but for Trump it's some of the best media coverage he has had in weeks.