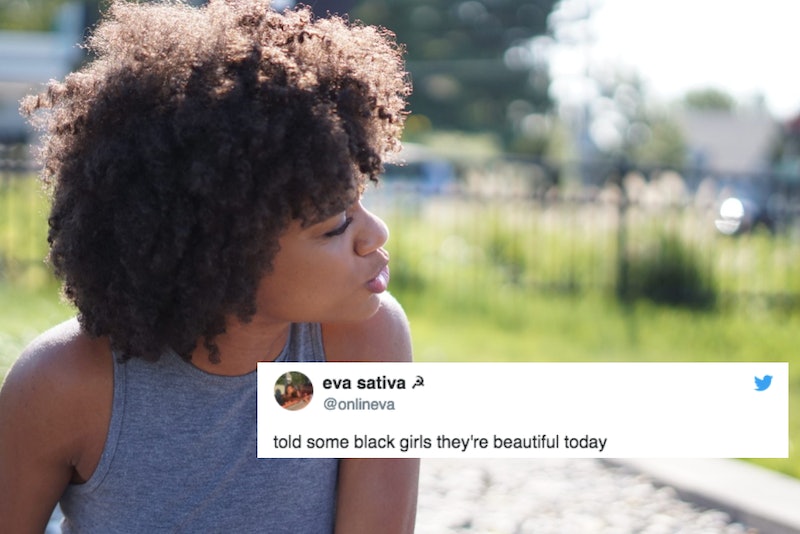 Being a Black woman in the U.S. is, you know, pretty difficult. All minorities and marginalized folks face some sort of oppression, but Black women often face some pretty intense pressure. We have to deal with people judging our hair, whether we choose to wear it natural or straightened, and expecting us to fit (or not) the 'Angry Black Woman' trope. (Unsurprisingly, negative portrayals of Black women in media appear twice as often as positive portrayals, according to one study.) It's a lot to handle, and it's one of the reasons a tweet has struck a cord with so many women of color: There's a video going viral that's literally just a Black woman telling other Black women they're beautiful, and the Internet is obsessed. It'd be a sweet message if it featured women of all races, but the decision to focus on Black women is so important. Consider that Black women are least likely to receive responses or messages on online dating sites, and there are even Black men who say they won't date Black women. I've lived it firsthand.

Growing up, I had boys of all races tell me I didn't seem like "other" Black girls. I thought it was a compliment. In college, I nodded along when a white male friend revealed he had a crush on a Black acquaintance even though he "never finds Black girls attractive." It took me some time to realize my worth, so this video means a lot to me. Filmed at Spelman College, a historically Black college in Atlanta, the video was uploaded Nov. 7 by Twitter user @onlineva. In less than a day, it's racked up tens of thousands of likes and retweets. You have to watch for yourself.

You can tell by the smiles on these women's faces that the videographer made their day with the compliment. But the most empowering thing about this video is how many people confidently answered, "Yes, I know." One recent study found Black women are actually more confident than white or Hispanic women when asked about success and beauty. Could this be a defense mechanism? I learned at a young age that I wasn't ever going to fit conventional standards of attractiveness, especially because I grew up in a predominately white suburb and felt different from everyone around me. It felt like a crushing blow at the time — I wanted my lips to be smaller and my skin to be lighter. I wished for a dainty figure instead of the large hips and butt I had. Those comments from guys who weren't into black girls definitely didn't help. But once I did accept my body and my Blackness, their opinions suddenly seemed irrelevant.

In a particularly gut-wrenching moment, the viral videographer asks a woman named Brooke if she knows that she's beautiful. She smiled but responded, "no," and Twitter wasn't having any of it. Twitter user @KameronWillis wrote, "Message to brooke (girl who said no) you are a beautiful and strong black woman. You better start believing it because it's true. Stay blessed."

The video will likely inspire a few copycats, which will spread even more love and #BlackGirlMagic. Twitter user @kristingrayceee wrote, "I wanna do this now." It's important to acknowledge that the video is so moving because it's a Black woman supporting fellow women. If it were filmed by a Black man or a white woman, we'd likely be side-eyeing and wondering the intent. But as a Black woman who spent most of my childhood wishing I was different, I'm inspired by this. I'm going to text a few Black friends and tell them just how beautiful they are — who knows how much they may need to hear it?