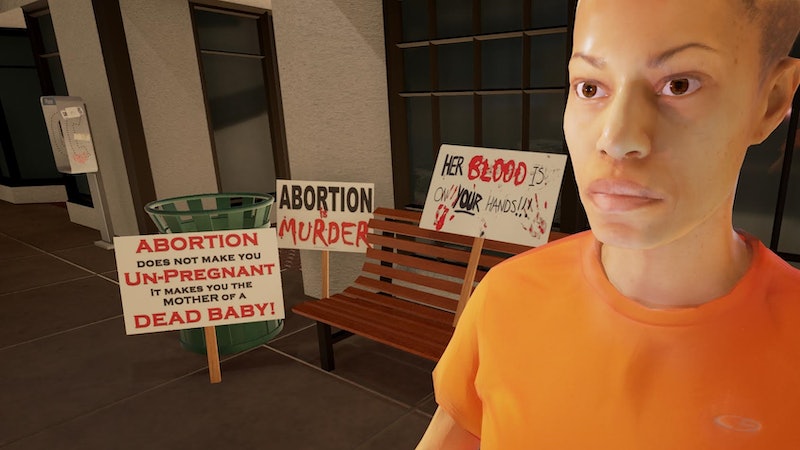 Going to an abortion clinic can be a jarring experience. There's verbal harassment from anti-abortion protesters on one's way to the clinic, as well as the incredible tension involved in finding a safe and affordable option. In the United States of America, where abortion clinics are frequently under attack, the subject of safe and accessible reproductive health care is an uncomfortable topic for many. To shed much-needed light on this issue, this virtual reality film highlights abortion clinic harassment. The virtual film, titled Across the Line, is almost eight minutes long, and was created by Nonny de la Peña, Brad Lichtenstein, and Jeff Fitzsimmons. It can be viewed with a Google Cardboard player on your phone, or other platforms like Gear VTR and HTC Vive.

Research from Planned Parenthood shows that viewing the film has actually created empathetic responses in viewers. By conducting studies on two groups in two different settings, the organization has been able to extract actual proof of heightened empathy after viewing the film. At the 2016 Sundance Film Festival, two groups — one containing 147 participants and the other containing 137 — took a survey on abortion clinic harassment. The participants were predominantly white, male, and liberal-leaning. The former group, which hadn't watched the film, was less considerate about harassment compared to the latter group, which had, Planned Parenthood said.

The same study took place in Kansas City and Atlanta, this time with politically moderate women who had never had an abortion. After viewing the film, the participants were much more empathetic about the harassment patients and volunteers face.

The film starts in a simple clinic room, where a patient awaits her doctor. The doctor is Raegan McDonald Mosley, who is an actual doctor for Planned Parenthood, while the patient is played by Kristina Nailen — who, according to Broadly, has had an abortion in real life. The two characters both have firsthand insight into the contentious world of abortion care.

With a 360-degree video, the video simulates a woman's experience involving her trip to a health care clinic for an abortion. It sounds simple, right? It's not. On her way, Nailen's character is harangued by a protester, who insists on taking her to a different place. He proceeds to tell her that "there's a more dignifying choice," as opposed to going to the clinic. At first, his tone is patronizing, but then quickly takes on a chilling tenor with his unrelenting insistence.

Watching the film using Google Cardboard brought me much closer to the experience of a woman seeking safe reproductive health care. And that's the purpose of Across the Line — to show viewers the real risk a woman takes to find safe health care while practicing the right to her body. Hopefully, this experiment in virtual reality will continue to bolster empathy in its audience.