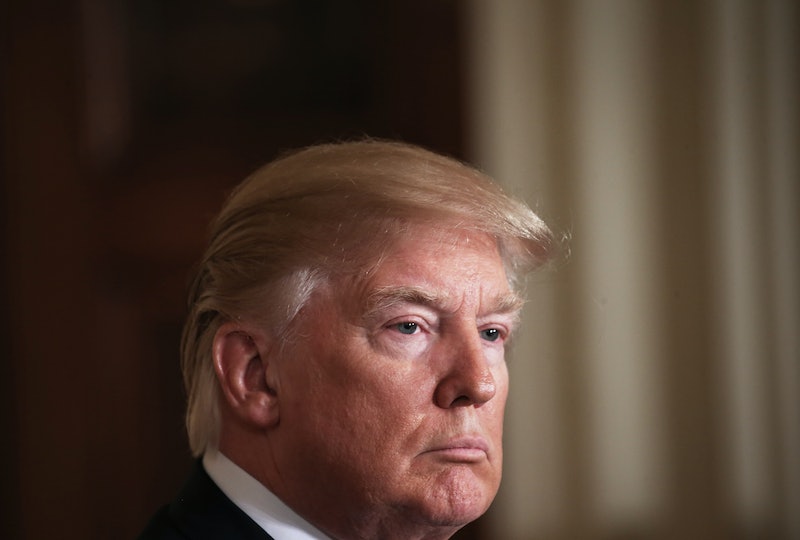 President Trump has had several bad weeks since his election, but this week may have been the worst. It was the week that he lost, big league. Although many of us might have perceived Trump as a loser in a general sense for quite some time, this was the first week Trump was a loser by his own definition.

The most obvious example of this was, of course, the unanimous and unambiguous defeat that the Trump administration suffered in the 9th Circuit Court of Appeals on Thursday. At issue was the executive order Trump signed in January banning immigration to the U.S. from seven Muslim-majority countries, and the court was unequivocal: The three-judge panel unanimously agreed to uphold a lower court's decision that blocked the ban from being implemented.

This is worth further examination: Trump lost this case not only because the 9th Circuit is a liberal court (although it is), but because of several elementary and avoidable mistakes that his legal team made — mistakes that mirror notable aspects of Trump's own personality.

For instance, the administration didn't merely argue that the ban itself was constitutional; it argued that the courts didn't even have the right to review its constitutionality. This is a reflection of Trump's own dictatorial tendencies (which were on display long before he entered politics), as well as his growing disdain for the judicial branch — but as a legal argument, it backfired spectacularly, and helped sink the administration's chances of winning the case. The court also cited Trump's own statements referring to the policy as a "Muslim ban" as grounds for blocking it, making it clear that Trump helped dig this hole himself.

The court ruling was a big one, but wasn't the only defeat the president suffered over the week. Trump was also the loser in his first stand-off with China, which came to a conclusion on Thursday.

In December, Trump proclaimed that unless the U.S. got something in return, he saw no reason to continue honoring the "One China" policy — that is, Beijing's longstanding position that the island of Taiwan belongs to China. This policy is a very big deal to China, and the U.S. has sided with China on the matter for decades. For Trump to demand concessions from China in exchange for continuing to accept the One China policy was a shocking and bold move from the young administration.

Until Trump caved. On Thursday, the White House announced that actually, nevermind, the administration will continue to support the One China policy. It was a humiliation in three acts: First, China told the Trump administration that the One China policy was "not up for negotiation;" then, Chinese President Xi Jinping refused to talk to Trump on the phone; finally, the White House released a statement announcing that "President Trump agreed, at the request of President Xi, to honor our 'one China' policy."

If that's not folding, there is no such thing as folding. Trump beat his chest, made an audacious demand, and then slunk away with nothing to show for it a month later. This wasn't only a defeat for the administration in its dealings with China; it was a sign to America's allies and enemies alike that Trump's threats are not to be taken seriously. That will almost certainly haunt his attempts at diplomacy going forward.

There were more losses for Trump this week. He lost the support of Rep. Jason Chaffetz, chairman of the powerful House Oversight Committee and, until this week, a staunch defender of Trump. After repeatedly brushing off requests to investigate possible conflicts of interest in the Trump administration, Chaffetz finally broke on Thursday after Trump aid Kellyanne Conway appeared to violate federal law by endorsing Ivanka Trump's clothing line from her position as a White House official.

"She cannot be using the assets of the bully pulpit of the White House to promote a product like that. It is just wrong, wrong, wrong," Chaffetz told reporters. "[Oversight Committee Ranking Member] Elijah Cummings and I are going to jointly send a letter to the White House and Office of Government Ethics, but it needs to be referred to them. It was clearly over the line, and it's not acceptable. She should have known better."

Trump also suffered some setbacks that weren't quite losses — yet. Several news outlets reported that his National Security Advisor Michael Flynn had diplomatic discussions with Russia's ambassador before Trump was sworn in. This would be a violation of the Logan Act, which prohibits private citizens from conducting diplomacy — and the New York Times reported that a transcript of Flynn's conversation exists. Flynn repeatedly denied the allegations earlier in the week, but after the Times report, a Flynn spokesman said that he "couldn’t be certain" that no such conversation was had. Drip, drip, drip.

According to Politico, these losses and others are taking their toll on Trump, who is "growing increasingly frustrated with the challenges of running the massive federal bureaucracy" (Who would have though being president would be challenging?). Perhaps more damagingly, though, they directly undercut Trump's brand. He fancies himself a winner, and has gone to great lengths to present himself as such. But this week, Trump proved to America that he's more than capable of losing.