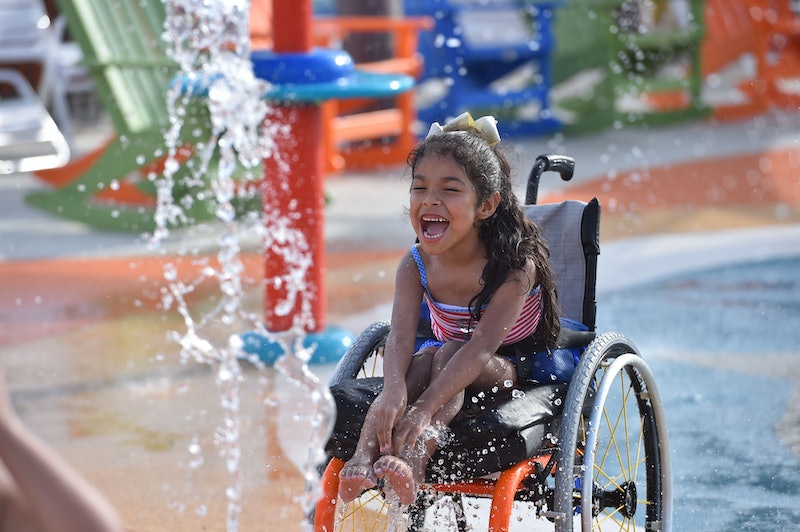 Water parks are a great way to cool off in the hot summer months, but for individuals living with physical or cognitive disabilities, they can be overwhelming, cost-prohibitive, inaccessible, and frankly, not all that fun. Accessibility can often feel like an afterthought. But a new park in Texas is changing that by opening the world’s first water park designed for people with disabilities.

Morgan’s Inspiration Island in San Antonio is a tropical-themed water park that features six major attractions, including an accessible river boat ride, and a variety of splash pads — surfaces with geysers and water cannons and waves that are more accessible than regular pools. The park even worked with researchers at the University of Pittsburgh to design waterproof wheelchairs called PneuChairs that weigh far less than traditional wheelchairs, and run on compressed air instead of batteries, so visitors can use these instead of risking any damage to their own expensive wheelchairs. The park also offers a model that is pushed by a caretaker, and a manual wheelchair in order to cater to people’s different needs and preferences.

And to ensure it is truly accessible to everyone, entrance to the park is completely free for anybody with a disability.

Morgan’s Inspiration Island is a sister-park to Morgan’s Wonderland, a fully-accessible theme park which is right next door, and that opened in 2010. The parks were built by Gordon and Maggie Hartman, who were inspired by their daughter, Morgan, who lives with disability and who the two parks are named after. Gordon, a former developer, was moved to build them after he saw Morgan try to play with other kids at a hotel swimming pool but “the kids were leery of Morgan and didn’t want to interact with her.” He wanted to open an accessible theme park not only so people with disabilities could fully enjoy it, but also so that they could gain a better understanding of other people’s disabilities. He doesn’t want you to call Morgan’s Inspiration Island a “special needs park” though. It is a “park of inclusion.”

“Morgan’s Inspiration Island will concentrate on inclusion, and inspire guests to do things previously thought not to be in their range of capabilities,” Gordon explains. “Those without disabilities and those with, including individuals in wheelchairs, guests with hearing and visual impairments, and even guests on ventilators, will be able to play alongside each other and gain a greater appreciation of one another.”

Gordon and Morgan worked with water park consultants, doctors, therapists, special education teachers, caregivers, and the disability rights community to create a space that would be welcoming to guests with any type of disability.

In addition to its water attractions, the park also offers quiet, private areas for those who may be overwhelmed by crowds or noise, waterproof wristbands for individuals who tend to wander, and a system that allows park operators to quickly change the temperature of the water for guests who have a cold sensitivity. Service animals are also allowed in the park, though not on the splash pads. And if all that wasn’t enough, Morgan’s Inspiration Island also filters and recirculates the water to make the park as eco-friendly as possible.

“When Morgan’s Wonderland opened in 2010, we didn’t really know what to expect,” Gordon says, “But the park’s popularity has grown tremendously, and encouraged us to add Morgan’s Inspiration Island. Now, we’ll have two attractions like none other that everyone — regardless of ability or age — can enjoy.”

Morgan’s Inspiration Island opens June 17th, and will be open daily until August, and on weekends for the rest of the year.