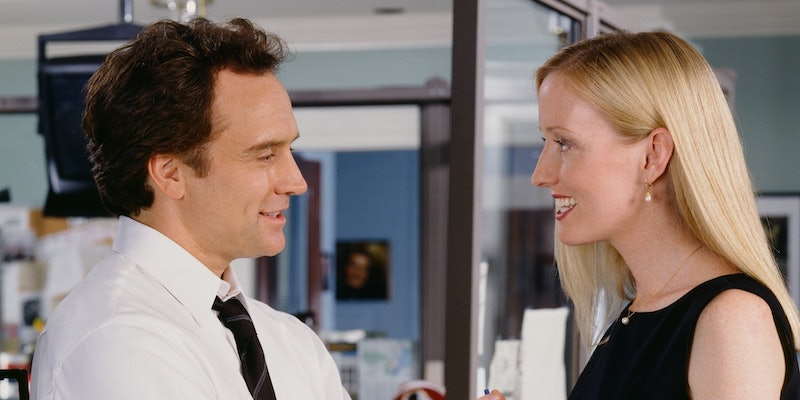 Will-they-won't-they relationships are one of the hallmarks of a classic television series. Ross and Rachel on Friends, Jim and Pam on The Office, and Lorelai and Luke on Gilmore Girls are just a few of the couples who have strung fans out over the unpredictable nature of their love affairs. One of the oft underrated examples of this TV trope is Josh Lyman (Bradley Whitford) and Donna Moss (Janel Moloney) of The West Wing. For a memorable television romance that almost didn't happen, according to creator Aaron Sorkin, by sheer chemistry and fan support alone this couple became a staple of the Emmy-winning show. And when reflecting on their love story, one can't help but look back on the scene that sums up Josh and Donna's relationship perfectly early on in the series.

The duo's inter-wing romantic tension spanned all seven seasons of The West Wing and when the two (finally!) shared a kiss in Season 7, Episode 13 — "The Cold" — the cat-and-mouse game seized once and for all. But the most memorable exchange between Josh and Donna actually takes place all the way back in Season 2, Episode 18, "17 People."

This episode has major dramatic implications for the entire series, as it's when Communications Director Toby Ziegler finds out about President Bartlet's MS diagnosis and must work with the 16 other people who know of his condition in order to find a political plan. Meanwhile, the remaining unaware staff members must craft a comedic, yet presidential speech to be delivered at the Correspondents dinner. (It's a universe where presidents still go to these things.) In addition to all of this, the episode also offers Josh and Donna shippers an interaction that cements why they're a couple worth rooting for, and roped viewers in another five seasons.

The scene comes after Josh and Donna are bantering (because of course they are) about when Donna began her job as Josh's assistant. He gives her flowers to commemorate the anniversary of their working relationship in April, although Donna insists she began the job in February. This is when Josh slyly reminds her that she left the position before coming back after he believes she was dumped. He's clearly a little insecure that he almost lost Donna as an assistant to an ex-boyfriend and enjoys reminding her of it.

Later in the episode, after some more flirty rapport, Donna reveals to Josh that he doesn't know the whole story. When she returned to work for him, the bandage she had on her ankle was not the result of an icy fall, but a car accident. Her then-boyfriend, on the way to pick her up at the hospital, stopped to have a beer with his friends. Donna ends up dumping him, and she assures Josh that this job was not her second choice. Josh is properly horrified by Donna's ex. Next, the duo earn their spot in the pantheon of epic television romances with this exchange:

Donna reveals how much she really cares, and Josh is properly stunned. Fans are signing themselves up for a television romance that won't find its happy ending until the final season. But, like most great will they/won't they's, this scene gives the audience just enough chemistry and hope to see the potential between the two for a lasting relationship.

Who doesn't love watching Donna and Josh flirting about Josh's computer incompetencies one minute, and the next casually stating that they would lay down their lives for each other? It's also so great to se Donna assert that she chose her burgeoning career over a lackluster man, and that Josh is clearly here for it. Who knew stoplights could make for such romantic symbols?

More like this
Kaley Cuoco Was Set Up With Her New Boyfriend Tom Pelphrey By Her Manager
By Hugh McIntyre and Jake Viswanath
Clayton & Susie Broke Up, Citing "A Significant Amount Of Pain" After 'The Bachelor'
By Jordyn Tilchen
Blake Lively & Ryan Reynolds’ Relationship Timeline Includes 4 Baby Bumps
By Jake Viswanath
What’s New On Netflix: Ana De Armas’ 'Blonde' & A Nick Kroll Special
By Arya Roshanian
Get Even More From Bustle — Sign Up For The Newsletter