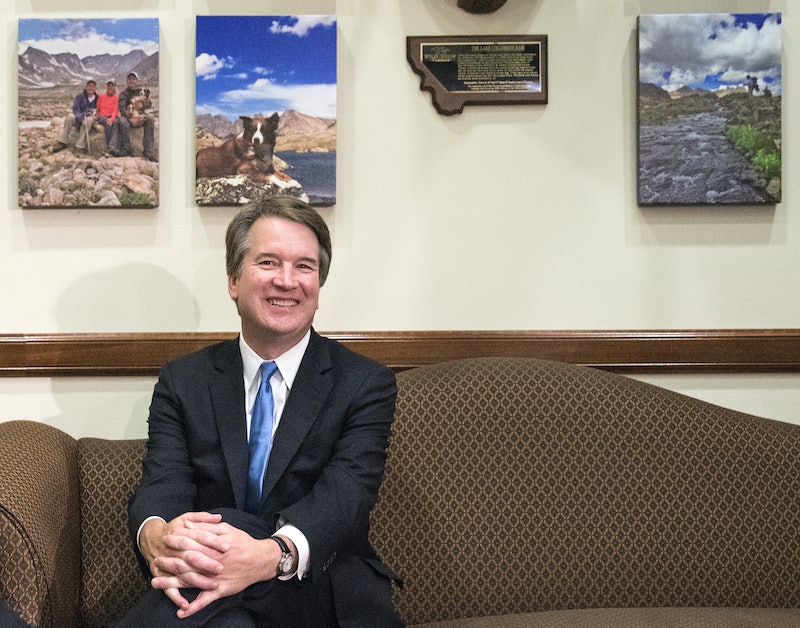 In an attempt to drum up support for President Trump's latest Supreme Court nominee, the White House highlighted Brett Kavanagh's "great hair" in a press release and email to reporters on Friday. The quote is from an article published Thursday in the New York Times, a newspaper Trump has repeatedly dismissed as "FAKE NEWS," in which a one of Kavanaugh's former law students is quoted praising his hair.

The New York Times: “‘Best Professor.’ ‘Very Evenhanded.’ ‘Great Hair!’: Brett Kavanaugh, as Seen by His Law Students” is the headline to the Times piece, which is largely an overview of anonymous course evaluations that Kavanaugh received while teaching law at Harvard, Yale, and Georgetown. The main takeaway of the article is that Kavanaugh, by and large, received glowing reviews from his students. The White House website quoted some parts of the article verbatim but didn't publish it in full. For instance, the White House omitted a section in which The Times accurately notes that the praise for Kavanaugh's hair is "not particularly germane to his teaching."

Trump nominated Kavanaugh, a federal appeals court judge, in early July to fill the Supreme Court seat left vacant by Anthony Kennedy. His appointment has been strenuously opposed by progressive groups, and many advocates for reproductive rights fear that seating him on the high court could pave the way for Roe v. Wade to be overturned.

In all likelihood, however, Kavanaugh will ultimately be confirmed and seated as the next Supreme Court justice. Sen. Majority Leader Mitch McConnell has pledged to hold a vote on his nomination before the midterm elections, thus ensuring that Republicans will still control the chamber when that vote is held. Kavanaugh only needs the support of 50 senators to win confirmation — Vice President Mike Pence can cast the tie-breaking vote if needed — and there are 51 Republican senators.

Some on the left have held out hope that Sens. Susan Collins and Lisa Murkowski, the only two nominally pro-choice senators in the Republican caucus, might team up to tank Kavanaugh's nomination. However, both Collins and Murkowski voted to confirm Kavanaugh to the circuit court in 2006, and both have given him light — though not unequivocal — praise since Trump announced the nomination.

“There were some who have been on the list that I would have had a very, very difficult time supporting, just based on what was already publicly known about them,” Murkowski told Politico in early July. “We’re not dealing with that.” Collins told reporters at the time that Kavanaugh "clearly is qualified for the job," though she added that "there are other issues involving judicial temperament and his political, or rather, his judicial philosophy that also will play into my decision."

If confirmed and seated, Kavanaugh could ultimately be in a position to rule on matters stemming from the ongoing investigation into the president by Special Counsel Robert Mueller. Though it's far too soon to say what type of lawsuit would lead to such a situation, Kavanaugh has in the past doubted the constitutionality of independent investigations into the president. This has led some Democrats to suggest that Trump's appointment Kavanaugh could shield him from any potential ramifications of Mueller's investigation.

Although the Senate will vote on Kavanaugh's nomination before the midterm elections in November, McConnell hasn't yet announced a date for his confirmation hearings.