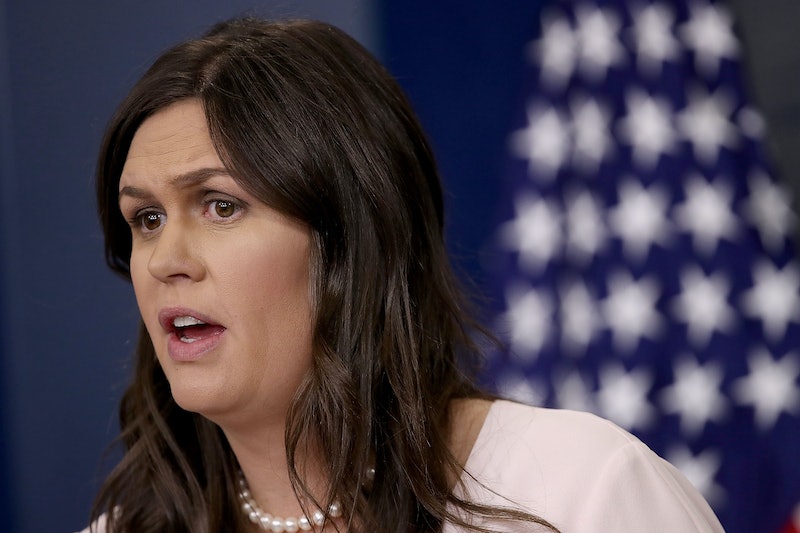 The drama between President Trump and the Philadelphia Eagles isn't slowing down any time soon. Two days after Trump abruptly disinvited the Eagles' to the White House, Sarah Huckabee Sanders said it's the Eagles' fault that Trump disinvited them, and accused the team's players of "abandon[ing] their fans" by refusing to meet with the president.

"Unfortunately, the Eagles offered to send only a tiny handful of representatives, while making clear that the great majority of players would not attend the event, despite planning to be in D.C. today," Sanders, the White House press secretary, said in a statement. "In other words, the vast majority of the Eagles team decided to abandon their fans."

The Eagles won the Superbowl in 2018, and it's customary for the Superbowl champions to celebrate at the White House after their victory. However, several high-profile Eagles players said that they wouldn't be attending the ceremony because they oppose Trump and his policies. Nevertheless, the White House confirmed in late May that a visit would take place in June, even though some of the players wouldn't be attending it.

But on Sunday, one day before the planned visit, Trump yanked the invite, apparently because not enough players from the Eagles to his liking were actually planning on coming. ESPN reported that no more than five members of the team were set to come.

The White House-Eagles flap is distinct from, but not entirely unrelated to, the ongoing dispute over the National Anthem at NFL games. When Trump said in October that the NFL should cut any players who kneel during the anthem, as many players have been doing in recent years in protest of police violence, the NFL Player's Association (NFLPA) released a statement saying that it is "extremely disappointed in the statements made by the President," and that "no man or woman should ever have to choose a job that forces them to surrender their rights" to free expression.

Trump sent a tweet Monday implying that the decision of some NFL players to kneel during the National Anthem played a role in the White House's decision to disinvite the Eagles. However, not a single Eagles player actually kneeled during the anthem during the 2017 season; one player did kneel at a preseason game, but he was cut from the roster before the season began.

Several Eagles players have broadly denounced Trump's presidency, however. Wide receiver Torrey Smith said in February that he believes Trump is "sexist [and] has no respect for women," and denounced him for calling former NFL quarterback Colin Kaepernick, who started the protests in 2016, a "son of a bitch."

"If I told you that I was invited to a party by an individual I believe is sexist or has no respect for women, or I told you that this individual has said offensive things towards many minority groups," Torrey said, "[and that] this individual also called my peers and my friends SOBs, you would understand why I wouldn't want to go to that party. Why is it any different when that person has title of President of the United States?"

In a statement Tuesday, the NFLPA denounced the White House's move.

"Our union is disappointed in the decision by the White House to disinvite players from the Philadelphia Eagles from being recognized and celebrated by all Americans for their accomplishment," the NFLPA said. "This decision by the White House has led to the cancellation of several player-led community service events for young people in the Washington, DC area." The union added that "NFL players love their country, support our troops, give back to their communities and strive to make America a better place."

The White House said Tuesday that "more than 1,000 Eagles fans" were planning on attending the ceremony. Although many people did show up at the White House on Tuesday, NBC10 reporter Tim Furlong reported that only one of them wore clothes with an Eagles logo on it, and that not a single one of them he spoke with could identify the Eagles' quarterback.