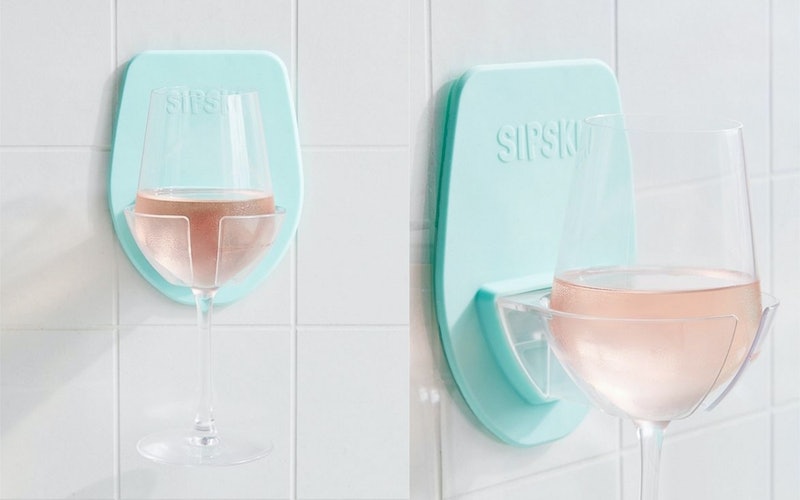 It goes without saying showers are hardly just for cleaning oneself. In his memoir Open, Andre Agassi described a certain kind of insightful shower, saying, "It's one of those showers that make you think you should write a check to several environmental groups — and maybe plant a tree.” Many people would agree that the shower is one place where much of their thinking takes place, be it about world affairs or what to have for dinner. Wouldn't it be nice to enjoy a glass of wine as you ponder the human condition? Enter: the Sipski Shower Wine Glass Holder.

Move over, shower beer, shower WINE is here to play. The Sipski Shower Wine Glass Holder is an ingenious tool created to keep your glass steady in the shower. Robin's egg blue or light grey waterproof silicone sticks to the tile on the wall of your shower or bath, and holds your glass of wine steady in between sips. The material is food-safe and dishwasher-safe for an easy cleanup. Though, since you're already using it in the shower, maybe you could just clean it right there. It's the same logic behind the saying "save water, shower together," but in this case the other person is your Sipski.

While we're on the topic, be sure to check out the beer counterpart to the Sipski Shower Wine Glass Holder. The Sudski Shower Beer Holder is a similar silicone pocket designed to house your trusty shower beer in between sips. It is waterproof, sticks to the wall in your shower or bath just like the Sipski, and comes in either dark blue or grey. As it is optimized for cans of any kind, the Sudski is ideal for shower seltzer or soda, as well. Just don't try putting any glassware in it.

Wine and baths have a legendary relationship rooted in relaxation, and the general public appears to be finally catching on to this. No longer is wine exclusively for sipping while you take your bath; now you can enjoy its scent, or even cleanse yourself with it.

Etsy user SwagBrewery knows how to turn wine into some pretty remarkable accessories that are optimal for using during your serene soak. First on the list is the Vintage Merlot Wine Soap. Crafted from ingredients like "...rosemary leaf extract and cranberry seed, the soap also includes an unexpected (but perhaps predictable) ingredient: wine! Per the website description, "Since wine is rich in vitamins, minerals, antioxidants and amino acids, it is an excellent treatment for your skin!" You can snag a bar of the soap for $7.99 on Etsy.

Swagbrewery has also created a brilliant Vintage Merlot Wine candle. The eight-ounce candle is housed in a recycled wine bottle and burns for more than 40 hours. The product description boasts, "The scents are inspired by the appealing notes of the wine or beer they're named after and can be described as smelling spicy, roasty, fruity, sweet, and fresh depending on the variety of candle. Yes they're fun but they are also quality candles that you'll want to keep burning forever and ever!" You can snag one for $17.99 off Etsy.

But for a bath time accessory sure to quench your thirst, stick with the Sipski. Happy shower karaoke-ing, one and all!