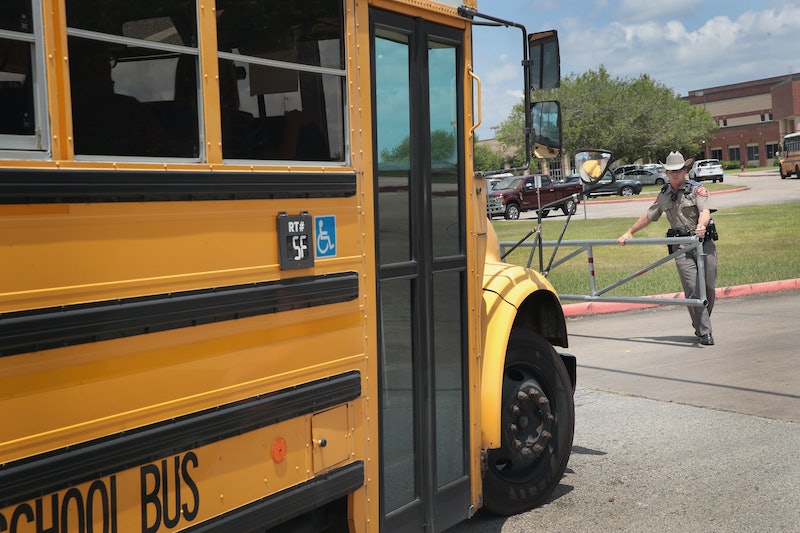 The photo made waves on Twitter after journalist Jules Suzdaltsev shared it early Monday morning, writing, "If anybody from Baraboo High School in Wisconsin can clue me in on why it appears the entire male class of 2018 is throwing up a Sig Heil during their prom photos - that would be great." Suzdaltsev said the photo was first shared by an account which seems to belong to a high school-aged teenage girl. That account is now private.

Suzdaltsev's Twitter thread also features a series of anonymous allegations concerning the school district's tolerance for racist behavior, purportedly shared by students. When asked about these allegations in conjunction with the prom photo, a spokesperson for the Baraboo School District tells Bustle, they "are launching an investigation, and as such, are unable to provide additional details or make appearances on camera at this time."

In a press release, a spokesperson for the district shared a letter it sent to parents Monday morning. The letter was signed by Superintendent Dr. Lori Mueller and said that administrators "are committed to upholding a community that values differences of identities, beliefs and perspectives."

We are proud to support students, families and staff of different races, faiths, national origins, immigration status, political viewpoints, abilities, sexual orientation and gender identity. Every student and family is a valued member of our community.

We want you to know that we are dedicated to all students and committed to a positive and productive education free from discrimination, including sexual harassment.

An undated "Hostile-Free Environment" notice on the high school's homepage further encourages "any individual who believes that he or she has fallen victim to discrimination or harassment, including a hostile environment," whether past or present to report their experience to school district officials.

Among those to respond to the photograph on Monday was the official Auschwitz Memorial Twitter account, which warned against the normalization of "hateful ideology." "It is so hard to find words..." the spokesperson behind the account wrote. "This is why every single day we work hard to educate. We need to explain what is the danger of hateful ideology rising. Auschwitz with its gas chambers was at the very end of the long process of normalizing and accommodating hatred."

Many writers also responded. "To repeat a point I have made many times before, there’s never been a serious consensus that racism is bad. Rather, it’s been that 'openly expressing racist views is impolite.' With national leadership celebrating that expression however, the norm is eroding," tweeted journalist Jamelle Bouie.

It's not immediately clear what the Baraboo School District's investigation will entail, or what repercussions the students in the photo might face. For the time being, any school-related actions are being kept private.