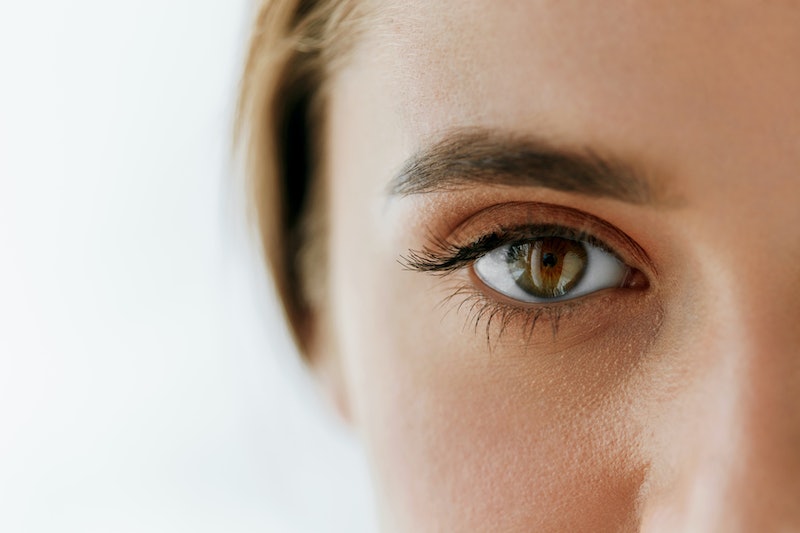 It sounds like a nightmare... or a TV show. Picture this: You go to the doctor in dire need of a diagnosis, and the doctors shrug, stumped by your condition. Now, picture that the condition you have is that you're finding literal worms in your eye. Yeah, it doesn't sound real — but that's exactly what happened to a woman in Oregon who found worms in her eye: According to CNN, doctors had never seen her condition before, and they literally did not know what to do for days. I should probably warn the squeamish who dared enter this story that it doesn't get much better after this point. Wash your hands and thank your stars that you do not have a colony of worms slithering across your eyeballs like this woman did. Yes, ~slithering~, and gliding across your pupils like they're ice.

We go to the doctor to find out what is wrong with us. But some medical cases require further investigation. If we've learned anything from House M.D. and Untold Stories from the E.R. it's that medical mysteries are like puzzles. And waiting is hell on earth for the inflicted. But there is usually some sort of resolution — or, at the very least, a figuring out of what has infected a patient that can lead to future medical discoveries that help diagnose and treat future patients more efficiently.

According to CNN, Abbey Beckley from Oregon, endured nearly three weeks with worms taking residency on her eye while doctors worked furiously to figure out how they had ended up on her eye. It started with mere irritation — something didn't feel right to Beckley when she was working on a salmon boat in Alaska, so she checked out her eye. But it wasn't just a speckle of dust like she thought; when the boat pulled into port and she looked at her eye, she realized what was causing her irritation and headaches: Worms. She was pulling literal worms out of her eye.

Beckley had pulled four from her eye before seeking doctors in Oregon to help with the condition. As she told CNN, "there were so many." Sorry about the nightmares!

When Beckley presented her symptoms, worms and all, doctors at Oregon Health and Science University were first skeptical of her claims — often times, when patients come in complaining of parasites, doctors consider the possibility of the condition being neurological — in other words, imagined — as well as real. But once they spotted the worms, they were convinced. A few worms were extracted from her eye and sent for testing at the Center for Disease Control.

Unfortunately, the testing didn't really help much. The parasite infecting Beckley's eye was found to be a species of worm called "Thelazia." According to a study published in the Emerging Infectious Diseases Journal by Domenico Ontranto and Moreno Dutto in 2008, "Thelazia callipaeda eyeworm is a nematode transmitted by drosophilid flies to carnivores in Europe. It has also been reported in the Far East in humans." The species had never been seen before in the U.S., and doctors didn't know what treatment to prescribe Beckley.

As Nidhi Subbaraman from BuzzFeed News wrote, "there have been 10 reported instances of Thelazia infections in the U.S. — nine in California and one in Utah — but all of those were caused by Thelazia californiensis, a species endemic to North America. There has never been a case of infection in Oregon until now." The one-of-a-kind case inspired a study of its own.

The American Journal of Tropical Medicine and Hygiene published "Case Report: Conjunctival Infestation with Thelazia gulosa: A Novel Agent of Human Thelaziasis in the United States" by Richard Bradbury et al. on Feb. 12, 2018. The case report describes the species of Thelazia (californiensis and callipaeda) as well as the "previously unreported parasite of humans, T. gulosa (the cattle eyeworm) as an agent of human thelaziasis and the first reported case of human thelaziasis in North America in over two decades." The latter was what Beckley was enduring.

Eventually, doctors surmised it was likely that she got it from a fly carrying the worm, which probably landed on her face before reproducing on the plush globe of her eyeball. Apart from that, though, doctors were stumped as to how to actually get the worms off her eye — and that's the worst part of this story. They worried that giving Beckley medications to kill the worms would potentially scar her eyes and damage her vision, and there wasn't any other treatment that was known to work for a case like hers. Again, it was an extremely rare infection.

So, instead, they told Beckley she had to wait until the worms died out on their own. Their life cycle was roughly 30 days, which sounds like a terrifying amount of time to know worms are hanging out in your eyes, but I think it's even worse imagining any situation that you go to a doctor for something like worms in your eyes and are told that they literally have no treatment for you.

Somehow, Beckley managed to remain positive about the situation. Like, truly... somehow. Beckley shared her coping method with CNN, saying, "'You can go into 'Poor me, Oh, my God, I'm going to let this destroy me,' or you can just think, 'OK, these are worms, and now I know the life cycle, and I know that they will die, and they are just sharing space.'" Viewing worms on your eye as 'sharing space' instead of 'squatting and invading' deserves as much applause for the brave woman as the doctors who finally figured it out.