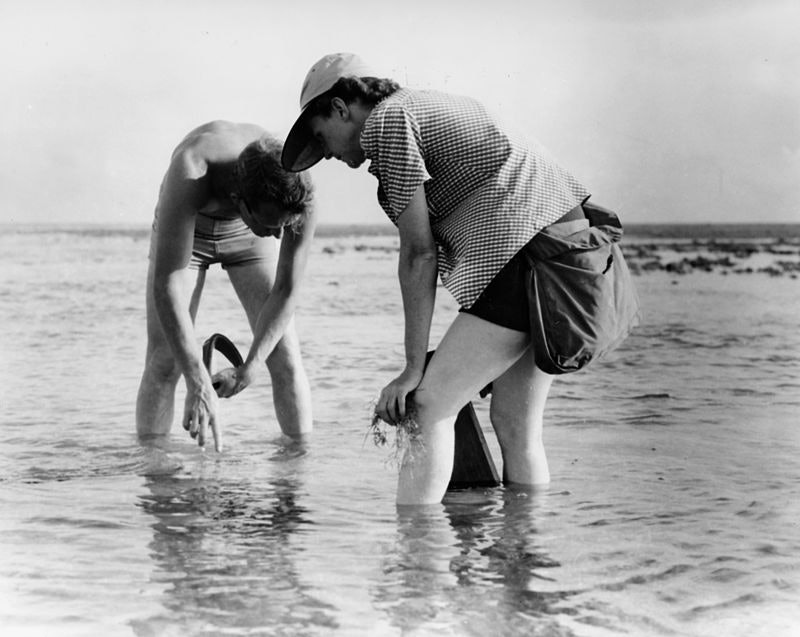 Fifty-five years ago, with her book Silent Spring, ecologist Rachel Carson ignited an environmentalist movement that still rages today. In Silent Spring, Carson wrote evocatively of a fictional town overcome with sickness and death following the aerial application of a pesticide like DDT. "Mysterious maladies swept the flocks of chickens, and the cattle and sheep sickened and died. Everywhere was the shadow of death," Carson wrote. "No witchcraft, no enemy action had snuffed out life in this stricken world. The people had done it themselves."

But what if there was a way to limit the harmful affects of DDT? What if DDT could be made both safer and more effective? A team of scientists at New York University believe they may have found a way to do just that.

Recently, the team of scientists (one of whom is the father of Bustle editor-in-chief Kate Ward) revealed they'd discovered a new crystal form of DDT that they believe to be more effective than the current form. NYU scientists Michael Ward, Bart Kahr, and Jingxiang Yang believe the discovery of this second crystal form of DDT means it may be possible to develop a new, potentially safer version of solid DDT.

"Make no mistake: DDT in its known state has been proven time and again to be damaging to our environment, most notably wildlife," NYU chemistry professor Bart Kahr said in a news release from the university. "However, our discovery of a new DDT crystal, which we've shown to be more successful and in smaller amounts in eradicating harmful insects, suggests that the creation of a safer pesticide is within reach."

Through Silent Spring, Carson heavily influenced the environmental movement alive today and her work continues to shape how we talk about a myriad of environmental issues some 55 years after it was first published. That said, despite the numerous studies done in the years since Silent Spring came out that link pesticides to things like cancer, Carson's work remains as controversial as ever. Critics continue to attempt to discredit her through scathing, and often sexist, personal attacks.

The NYU scientists behind the new DDT finding expanded on this point in an article published alongside their discovery, which they titled Abuse Of Rachel Carson And Misuse Of DDT Science In The Service Of Environmental Deregulation. Explain the authors: "We felt that it was insufficient to report some new, true things about DDT, without at the same time calling attention to false things that have been, and continue to be, aggressively promoted about the very same compound."

Carson's essential argument in Silent Spring is that humans were, in their attempts to control and conquer nature, damaging their own environment. As humans poisoned the natural world around them through the use of various chemical pesticides, nature in turn poisoned them. "The chemical war is never won, and all life is caught in its cross fire," Carson wrote. "It is ironic to think that man may determine his own future by something so seemingly trivial as the choice of his insect spray."

Among fans, Carson is credited with cultivating public concern for the environment by helping people better understand the two-way relationship humankind has with the natural environment. And, although Carson never directly advocated for the outright banning of chemical pesticides, many trace the Environmental Protection Agency's ban of DDT in 1972 to her work. However, like anything that ignites public debate, Carson's research into the damaging effects pesticides have on the environment has elicited a divisive response and the debate around DDT did not die when use of the chemical was banned in the United States.

In writing Silent Spring, Carson took on a large and powerful foe: The chemical industry. Unsurprisingly, the chemical industry responded aggressively to Carson's work. DDT manufacturer Velsicol threatened to sue Carson's publisher Houghton Mifflin and the New Yorker, which serialized excerpts of the Silent Spring. According to the New York Times, Velsicol launched a series of blistering personal attacks against Carson. They accused her of being a communist sympathizer employed by the Soviet Union to hinder America's ability to produce food.

Some of Carson's critics have gone so far as to vilify her as a mass murderer. Established by the Competitive Enterprise Institute, the website rachelwaswrong.org alleges Carson's work led "millions of people around the world" to "suffer the painful and often deadly effects of malaria." They claim Carson "sounded a false alarm" with Silent Spring. Even best-selling author Michael Crichton subtly vilified Carson through a character's claim "banning DDT killed more people than Hitler" in his 2004 novel State of Fear.

While much of the criticism directed at Carson stems from her efforts to draw public attention to the harm chemical pesticides like DDT have on the environment, some have also bemoaned Carson for creating a culture of fear and alarmism that leads to anti-chemical policies. In his book Pandora's Lab, pediatrician Paul Offit claims Carson's real legacy is that she "gave birth to the notion of zero tolerance – the assumption that any substance found harmful at any concentration or dosage should be banned absolutely."

Critics have also attempted to use Carson's gender and aspects of her personal life as a means to discredit her research. She has been characterized as "hysterical," a "spinster," and "emotional women in garden clubs," among other things. In a letter to editor submitted to the New Yorker following the magazine's serialization of Silent Spring, one reader ponders if Carson's opinion on insecticides is a reflection of her Communist sympathies. "We can live without birds and animals, but, as the current market slump shows, we cannot live without business," the reader wrote. "As for insects, isn't it just like a woman to be scared to death of a few little bugs! As long as we have the H-bomb everything will be O.K."

Yet, as a woman in the male-dominated field of science, sexism infiltrated even the praise Carson received. Slate notes that in Rachel Carson: Witness for Nature, biographer Linda Lear claims Carson was often assumed to be a man by readers of her books who did not believe a woman could posses such knowledge. According to Lear, science writers mulled over her physical appearance in reviews of her work and appeared surprised and relieved when they learned she was, as the New York Herald Tribune reported, "attractive."

But as much as critics and companies within the chemical industry have attempted to tear down Carson's book through personal attacks and a misrepresentation of scientific data, the legacy of her work continues to live on. It can be found in the environmental regulations and policies it influenced and the continued research — like that of the aforementioned NYU scientists — it inspires.

More like this
How To Fight For Reproductive Rights, Based On How Much Time You Have
By Courtney Young
LGBT+ Men Fleeing Afghanistan Were Denied Asylum By The Home Office, New Findings Show
By Sam Ramsden
Celebrities & President Biden Are Enraged By The Leaked Roe v. Wade Decision
By Alyssa Lapid
'The Spy Who Died Twice' Is Based On A Major British Scandal
By El Hunt
Get Even More From Bustle — Sign Up For The Newsletter