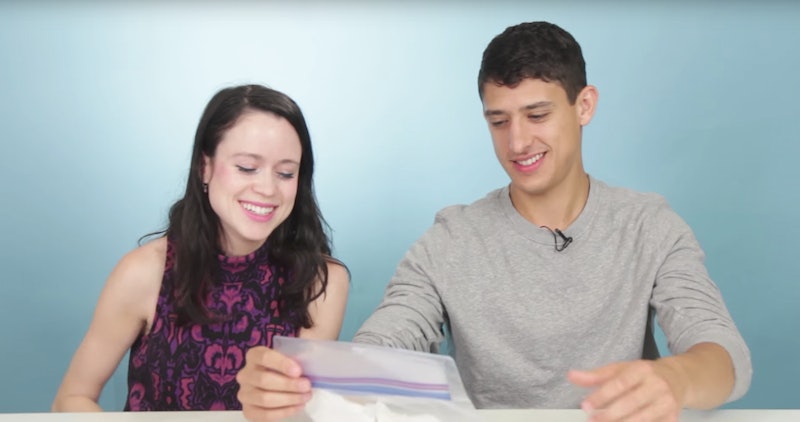 Periods are a completely normal bodily function for approximately half the human population, and yet there is still a lot of shame and disgust attached to menstrual blood. In a new video from BuzzFeed, a woman shows her boyfriend her period blood for the first time… and CHAOS ensues! Except, not really. The guy’s really pretty chill about the whole thing — as he should be.

The video shows couple Jennifer and Steven reaching a new level of intimacy by having her show a used menstrual pad to him. Jennifer estimates that she’s used at least 2600 menstrual products in her lifetime, but admits that, even now, she still feels pressure to keep that side of her life secreted away and goes out of her way to hide her period from Steven. “In terms of the bloody side of things, I try to hide it from him most of the time," she says in the video. “I think it’s just been ingrained in my system that it’s an embarrassing thing to have your period.” So she steps out of her comfort zone, and shows him a used pad.

To his credit, when confronted with proof that menstrual fluid is not, in fact, the blue water you see in tampon commercials, Steven does not run away screaming. His response is more along the lines of, “Um, OK.”

Kudos to this guy for not making a big deal out of some normal bodily fluids… but also, can we agree that this is kind of a low bar? (Isn’t it fair to expect guys, if not to be enthusiastic about menstrual fluid, at least to be mature about it?)

The big reveal doesn’t turn out to be that dramatic after all, but the video does demonstrate how little many men actually know about what periods look like. For example, Steven seems to be surprised that menstrual fluid comes in a lot of different colors, from pink to nearly black. “I was imagining, like, blood red, what you’d imagine the reddest of the red to be,” he says.

One thing this video highlights is that the stigma around periods doesn’t only come from men — a lot of women feel shame and embarrassment about this aspect of their biology. “It’s sad how, when I first got my period, how ashamed I was feeling about it,” Jennifer says.