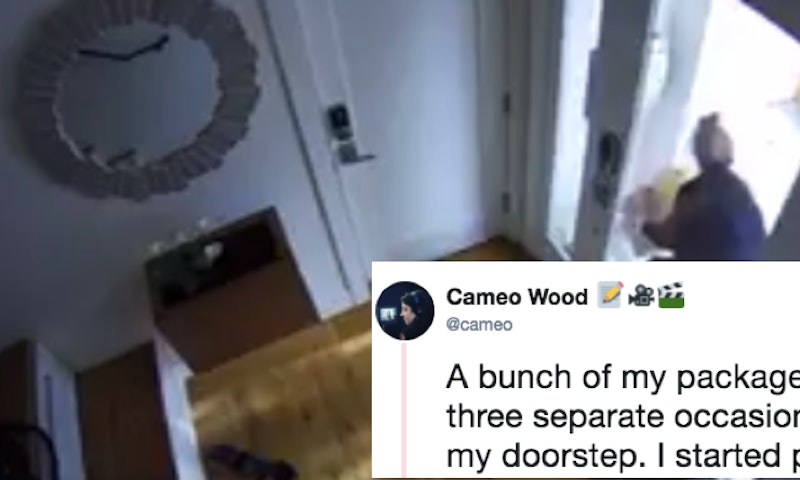 What would you do if you had a package stolen from your doorstep, directly? What would you do if you had nearly a dozen packages stolen from your doorstep, over the course of a few weeks? What about six packages in one day? What if that one day was Christmas Eve? And what if you had a security camera that recorded multiple thieves chasing the tails of your delivery man, taking your packages, only to load them up in their car that's already filled with other stolen packages? Would you lose your mind? Call the cops? Leave out fake packages filled with cat poop? Would you then tweet a video of said thieves stealing your cat's poop? All of the above? Same. Oh, and yes, this is a true story.

Cameo Wood, is a film director, online shopper, and resident of San Fransisco, California, who took dealing with a holiday package thief into her own hands ... ensuring that no thief ever attempts to strike twice. (Huge urge to make a number two joke right here, but will refrain.) Despite the fact that it's the holiday season, Wood was ordering some pretty uninteresting things online, like medication for her sick cat, and Woolite for her dark laundry. But apparently, the thieves of Noe Valley, a residential neighborhood of San Fransisco, do not judge goods by their packages.

"I've been dealing with stolen packages for the last couple of weeks. But the week before Christmas, things got really crazy," Wood told Bustle over the phone. "The delivery person would drop off the package, and before I could even get to it, someone would steal it from my doorstep."

Wood goes on to explain that towards Christmas, this would happen multiple times a day, all of which would be documented on her security camera. The footage would reveal that there were multiple thieves. The picture was clear enough to confirm that there were various perpetrators, but not quite good enough to incriminate anyone specifically. A close-but-no-cigar frustration like none other. The thieves would either follow the delivery trucks in their cars, or walk up and down the block, collecting sitting packages, Wood would helplessly observe from her window. Check out her footage here:

So while Wood wasn't the only one who was getting robbed, she was the only one on the block who caught it all on tape. Exasperated with the ruthless and seriously Grinch-like theft, Wood hit a breaking point — or genius point, depending how you look at it.

"I realized I had a lot of old Amazon boxes lying around and had an idea," she told Bustle. "You see, my cat is sick and on antibiotics, so the litter box smells *especially* terrible. So, I decided to put my cat's stinky poop in the extra boxes and place those boxes on my doorstep."

And?! The secret litter boxes were stolen, too. Five different packages containing Wood's cat's sick poops, were stolen, replacing the smell of diarrhea in her house to the smell of sweet poetic justice. Let's all just do a slow clap for Cameo Wood who made the best out of a really sh*tty situation. (Could not refrain from poop joke second time around.)

"Unless these were goth thieves, hoping to stock up on Woolite for dark clothes, they failed miserably," she told Bustle.

Now that Christmas is over, Wood is hoping that the coast is clear to start ordering packages again, but is definitely wary of an on-going issue, which she hopes to resolve legally, and soon. As for the Christmas doorstep thieves — they got exactly what they deserved. Wishing kitty Wood a speedy recovery, and Cameo Wood an Amazon Key.

More like this
On TikTok, #SeñoraEra Shows Latinx Users Becoming Their Mothers
By Natalia Perez-Gonzalez
12 Cheeky Instagram Captions To Use When You Haven’t Posted In Weeks
By Emma Carey
The “Teenage Dirtbag” Trend Is TikTok's Latest Nostalgic Obsession
By Meguire Hennes
How To Use The Whatnot App To Thrift Vintage Items
By Emma Carey
Get Even More From Bustle — Sign Up For The Newsletter