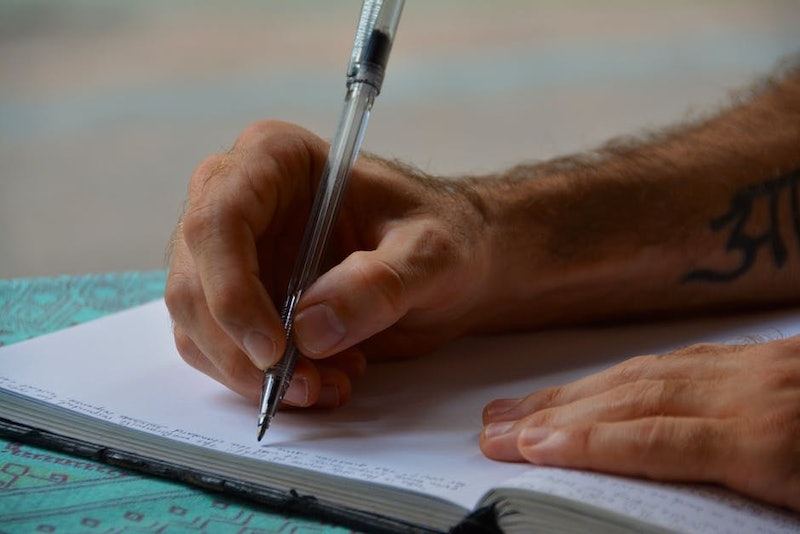 Beneath the layers of corny jokes and reminders to get your car’s oil changed, parents are just people, too. After finding a notebook her father used while learning English, one woman shared a message her dad wrote about her when she was much younger that has the internet all in its feelings.

Gabby Alfaro found her dad’s note in one of the notebooks he used while taking English classes, as reported by BuzzFeed News. Gabby’s father Carlos, who is Mexican, went to school to learn English while working in landscaping when he and Gabby’s mother were in their mid-20s. After Gabby’s mother discovered the old notebooks while cleaning, "She showed my sisters and I, and we bawled our eyes out," Gabby told BuzzFeed News.

Gabby graduated from the University of California, Riverside in 2016 and just received her Masters in Education and Teaching. To celebrate her recent academic accomplishment, Gabby shared a photo on Twitter of one of her father’s old English assignments. Gabby told BuzzFeed News, "I wanted to show him how his hard work has paid off.” Her tweet reads, “My dad took night classes to learn English and wrote this as an assignment. 17 years later, I got my Masters. I did it, pa. Thank you.”

Here’s what the letter says, in case you want your day made and your heartstrings pulled:

“It is amazing to see how fast some kids can learn the things we teach them. I have a daughter who just turn 6 years old, my wife and I used to read her books since she was 2 years old, now that she is in kindergarten, her teacher said that it's hard to believe how good she can read and spell. The teacher thinks that she reads as good as a third grade kid. My daughter enjoys reading, we try to buy her lots of books, sometimes we go to the library where she can read as much as she wants, also we check out up to 20 books for her to read at home. That's one of the reasons why I decided to go back to school. I want to be able to help her do the homework and show her that the only way to make her dreams come true is through education.”

The tweet has since by shared over 50,000 times. “When it started getting popular my mum called my dad at work to tell him he was getting famous,” Gabby said to BuzzFeed. “I'm sure he'll be a little embarrassed.”

The words “dad” and “embarrassed” are far from unfamiliar to each other, though it’s usually the dad doing the embarrassing. However, often when you least expect it, they’ll do something sweet and subtle (like leaving a note about peeling oranges) that hits you right in the feelings.

“Embarrassed or not, he's definitely proud,” Gabby told BuzzFeed. Her father’s emphasis on education has certainly paid off as Gabby will be working as an English teacher in the San Bernardino school district.

Excuse me while I go sob forever.

More like this
10 Must-Read New Books Out This Week
By K.W. Colyard
The Most Anticipated Books Of August 2022
By K.W. Colyard
We’ve All Had Bad Sex. Nona Willis Aronowitz Is Talking About It.
By Sophia Benoit
Anthony Templet Wants To “Live Normally” After Killing His Father
By Brad Witter
Get Even More From Bustle — Sign Up For The Newsletter