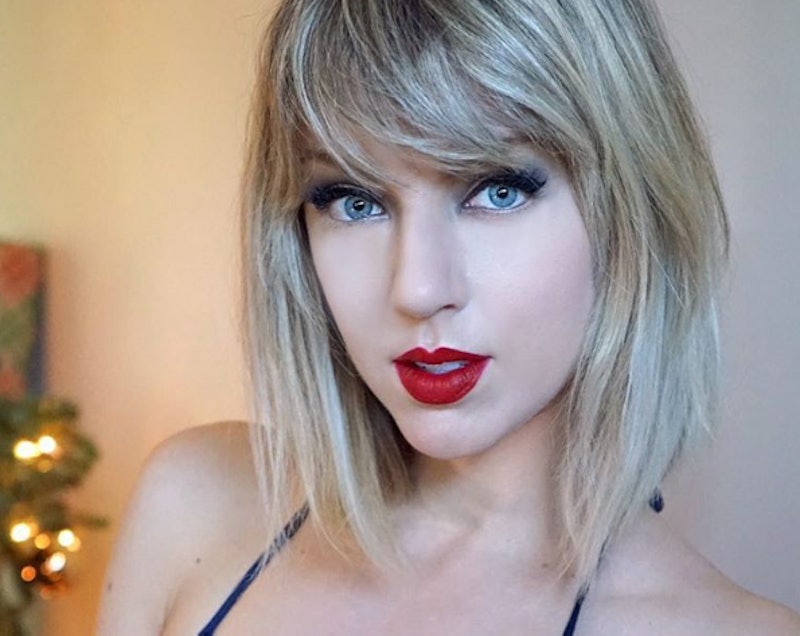 Makeup is used to transform yourself into all kinds of things — from your most glamorous diva self, to your fave Halloween costume, and yes, sometimes even to Taylor Swift. At least, that's the case for this Taylor Swift lookalike who uses makeup to transform into the star.

April Gloria is a cosplayer that has a pretty wicked hand when it comes to a makeup brush, transforming her already eerily-similar features into near Taylor duplicates. From the mouth to her eyes, she's almost a carbon copy.

A quick scroll though her Instagram feed is like looking at a Swift photo album. From the flawless, snow white skin, to the red lipstick that accents her cupid's bow, she has all of Swift's beauty moves down to a tee. She also rocks a retro cat eye with heavily fanned lashes, which helps her get those sharp, feline-like eyes that Swift loves. If you would put the two women next to each other, chances are you would think they were separated at birth. It's eerie and amazing all at the same time.

Of course, Twitter can't handle it. There's absolutely no chill over this revelation, as fan's reactions show, from highlighting the spooky similarities and crafting side-by-side photo comparisons:

To constantly being confused how they ended up following T-Swift when they had no recollection of doing so:

Others have told her they are now BFF's because of this amazing similarity. (If you can't exchange friendship bracelets with the real deal, then her doppelganger will do):

And have even gone as far as making her the background of their phones:

And you have to admit, the reactions are warranted. From the shade of her hair to her love of mini skirts and thigh high socks, she's a total doppelganger. She even has a pet cat! If that's not a truly Swiftian cosplay, what is?