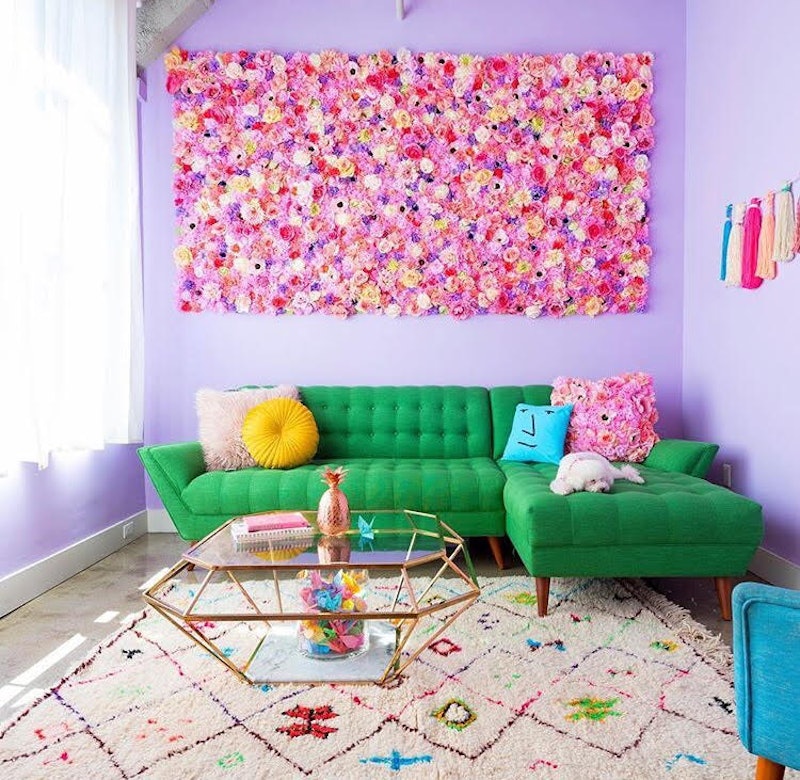 Amina Mucciolo first gained attention for the colorful tassel garlands she sold on Etsy. A few years later, the 34-year-old designer, social media sensation, and founder of Studio Mucci is living and working in a rainbow apartment in L.A. that looks like it was dreamed into reality by a technicolor unicorn high on cotton candy, sprinkles, and clouds.

Mucciolo’s magical apartment has taken the internet by storm. Studio Mucci currently has over 160,000 followers on Instagram who gush over her colorful space, with comments like “a home fit for a unicorn princess,” and “Can I come live with you!!!”

The apartment is an extension of Mucciolo herself, who rocks rainbow braids, glitter eye makeup, and an assortment of whimsical clothes and purses. By combining her love of all things “whimsical, pastel, and sparkly,” and her husband Salvatore’s “playful minimalism,” the couple was able to pack a lot of style in a 650-square-foot loft.

In the living room, the lavender walls, “flower wall”, pastel drawers, and the dozens of paper cranes hanging from the ceiling are meant to evoke spring, Mucciolo’s favorite season. The living room is connected to the kitchen by a 10-by-20 foot mural of a gradient rainbow with paint splatters on top that Mucciolo painted herself. Because the couple’s bedroom gets no natural light, they decided to embrace its cave-like qualities, and adopt a “crystal cave” theme that they incorporated with a pastel cave mural above their bed, and a poster of crystal and agate.

Despite her colorful designs, Mucciolo’s past was not always so bright. After her struggles with depression and bulimia, and with Salvatore's encouragement, she began talking about her life and her challenges on her popular YouTube channel, Tasselfairy.

“I want to talk about the people who don’t know what the f*ck to do with themselves,” Mucciolo told L.A. Weekly. “There are so many of us who are like that, who came from an OK family and things were fine — but just couldn’t figure it out.”

And though she has come far (Jessica Alba once asked HER for a picture!) she doesn’t want her fans to romanticize her life either.

“I still get a lot of people that say, ‘Your life looks so perfect and things look so easy,’ and so I really wanna make sure everyone knows that I still have days when I might not wanna get out of bed.”

Whether it’s through her fanciful designs or her messages of positivity and honesty, Mucciolo is making the internet a brighter place, one pastel-colored post at a time.