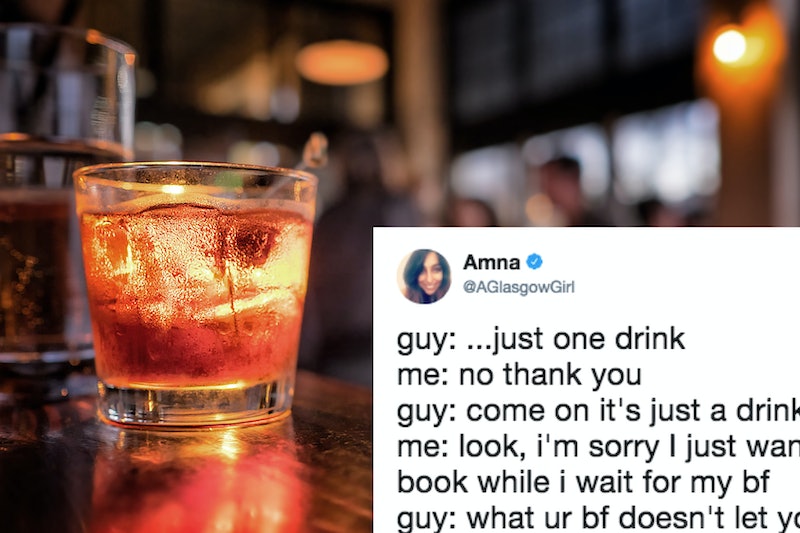 On Jan. 20 Amna Saleem, a writer living in London, was reading a book and waiting for her boyfriend to get off of work when a man approached her and wouldn’t leave her alone. The man’s actions were annoying and indicative of a culture that doesn’t respect women’s autonomy, but what happened next shows that women supporting other women (even if they don’t know each other) can have some amazing results.

Saleem tells Bustle she was “irritated” when the man wouldn’t take no for an answer. “I was reading Station Eleven and was really into it. So [I] was annoyed he was keeping me from it [to be honest].”

A women near Saleem overheard her conversation with the man and decided to step in by pretending to know her and stealthily asking if she was OK. "I was trying to remain polite so it didn't escalate but I was getting irritated at which point a lovely woman nearby intervened pretending to be an old friend," Saleem told Mashable. She added, “He looked annoyed and awkwardly hung about before finally leaving.”

Saleem tells Bustle that she was “touched” by the woman’s actions and decided to tweet about it. The message clearly resonated with people all over the world because her tweet went viral, garnering over 90 thousand retweets and nearly 490 thousand likes so far.

This isn’t the first time Saleem has been in a similar situation. She tells Bustle that she has intervened on the behalf of “young girls” who were “very thankful” for her quick thinking. "I feel like we should look out for each other," she told Mashable.

Before Saturday, Saleem tells Bustle she hasn’t been on the receiving end of intervention “in a long while.” She tweeted about previous times when folks stepped in on her behalf. She said a man told her that her friend was looking for her and wanted to know if she was OK. Another time someone apologized for being late and asked if she was OK. “It’s all in the eyes and tone,” she explained.

In addition to to getting thousands of retweets and likes, many people commented on Saleem’s experience. One Twitter user described a similar experience where a woman came up to her asking her to pretend to know her because she was hiding from a guy in the bar. “Best believe I acted like we were besties since birth. #girlcode,” @Val_Marieee wrote.

Another Twitter user, @FreeMediaVoice, believes Saleem could’ve handled the situation differently. “Throw the poor guy a bone and soften the rejection,” @FreeMediaVoice wrote, but Saleem shut down the notion that she owes strange men who are bothering her any of her time in the perfect way. “It's not my job to flatter a random man’s ego especially not at my expense. Be better,” she wrote. And she’s completely right. Women don’t have to be “nice” in order to receive respect.

Last year, gender-based violence expert, Holly Kearl, gave Bustle readers some advice for if they’re ever harassed. "If it happens on public transit you could report it to the transit authority. If it happens in a place like a restaurant or bar or store, you could try to report it to a manager or bouncer. If it's illegal, you can try to report it to the police," she explains. Kearl recommends reading Stop Street Harassment's guide to determine what's illegal and what's not.

It’s been past time for men to stop bothering women under the guise of offering a compliment or just wanting to be friends. If someone doesn’t want to engage with you, that’s their prerogative. Luckily, there are women like Saleem and the woman who intervened on Saleem’s behalf. Like Saleem said, “Women are great.”