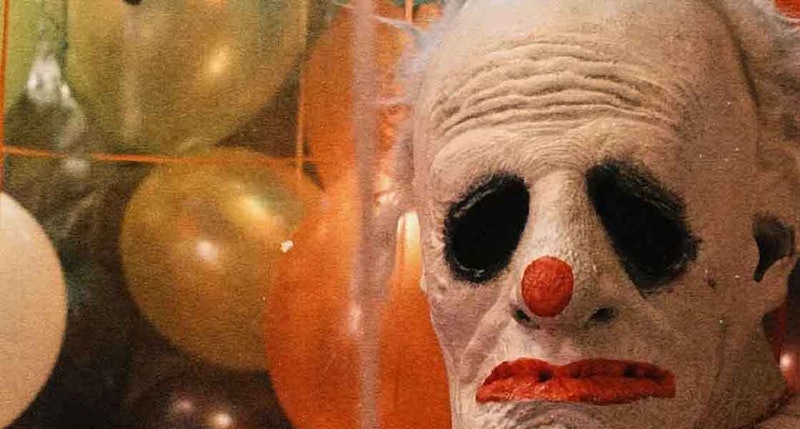 The Losers’ Club would not be thrilled about this upcoming documentary: the new Wrinkles the Clown trailer features a real-life Pennywise. Directed by Michael Beach Nichols, Wrinkles the Clown chronicles the very real narrative of Wrinkles, a Florida-based clown that terrorized children at the behest of parents. For the uninitiated, Wrinkles first acquired viral status in late 2014, when a YouTube video of someone in a clown costume and mask emerges from underneath a sleeping child’s bed was uploaded online. The description identified the figure as Wrinkles, a clown hired by parents to scare their children for misbehaving. When the clip went viral, more videos of Wrinkles emerged — and so did a trend of children themselves contacting the clown and documenting the ordeal online after a number is made available to hire Wrinkles for “behavioral services.”

Now, Wrinkles the Clown, in theaters and on demand on Oct. 4, is shedding light on the mysterious figure behind the clown mask for the first time. In a press release, the synopsis for the documentary, in part, reads: “Wrinkles becomes internet lore… Parents use the number to terrify their children, kids who are obsessive fans of creepy clowns reach out to make a new friend, children threaten to inflict wildly creative violence if he comes anywhere near them. But who is Wrinkles, and why is he doing this? With incredible access to the mastermind behind the mask, Wrinkles the Clown is a cryptic and playful exploration of these questions, as well as an inside look at myth-building and the unpredictable spread of imagination in the Internet age.”

In the trailer, viewers get a visual of the sticker advertisements for Wrinkles: a photo of the mysterious clown, wrinkled face and all, and a contact number tacked onto several dumpsters and signs. For narration, viewers hear voice messages of parents contacting the clown and hiring Wrinkles for his services. The trailer then documents the phenomenon as it reaches a fever pitch online and in the media. Finally, toward the end, the trailer appears to tease an unmasking of the man behind the clown costume. “No one would hire me when I was just a regular clown,” the mysterious voice says. “I just thought, yeah, maybe I’ll give it a little edge.”

Before viewers get a glimpse of the man behind the mask, however, the trailer cuts to a child who piercingly screams at the sight of Wrinkles in the backyard. Are you feeling uneasy yet? The real-life Pennywise was at once very real, and resided in southwest Florida, apparently. Because Hollywood really wants you to be wary of clowns, Wrinkles the Clown joins two other notable additions to creepy clown cinema this film season: It Chapter Two, in theaters Sept. 6, and Joker, in theaters Oct. 4.

Watch these creepy clown flicks at your own caution — but more so, good luck looking at Ronald McDonald the same way ever again.