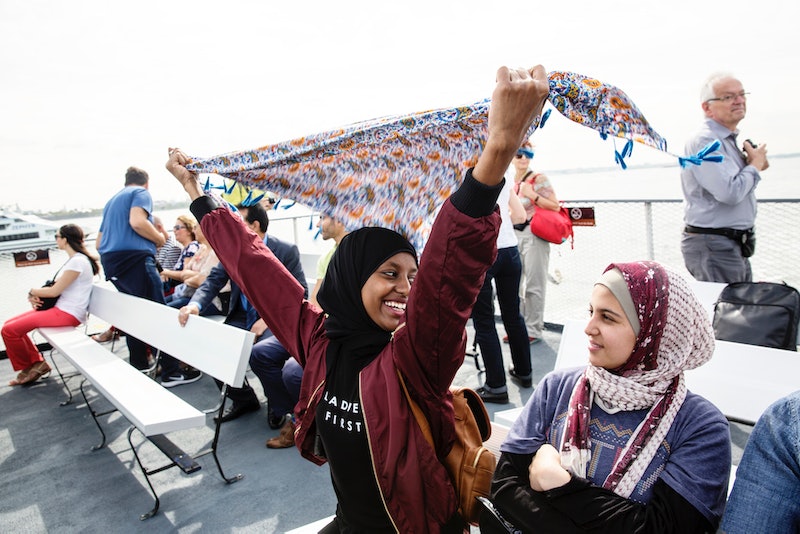 American culture, it seems, is at a crossroads between celebrating or denying its immigrant past and future. From Chimimanda Ngozi Adiche’s Americanah to Jon Stewart’s critically-acclaimed film Rosewater, immigrant stories have become an integral part of the American canon. But when they aren’t packaged for American consumption, they are often rejected and feared. With so much uncertainty running rampant through the nation's collective psyche, it's easy to get bogged down and forget the reason we're fighting the rising tide of xenophobia in the first place. That's why Zaynab Abdi, an immigrant from Yemen who went from being a two-time asylum seeker to a pre-law student in Minnesota, is so inspirational.

In spite of people who would erase stories like Abdi’s from the American narrative, her story of war, revolution, and the desire to make the world a better place is the reminder we all need of the truly great America we know and love.

Abdi says her life in her hometown of Aden, Yemen was both normal and pleasant: She had friends, she was getting an education, and she lived in a supportive community. That all changed when revolution came to Yemen during the Arab Spring. Abdi and her sister moved to Egypt, only to move once again when Egypt began to revolt against its own government.

"When the revolution happened, it was horrible, not just for me but for everyone," Abdi says. "We lost our house, our future, everything. When we moved from Yemen to Egypt, another revolution started."

The wartime experience Abdi describes are the kind most Americans will never have to face. Her classroom was bombed, her school was threatened, and there was a food shortage due to difficult border crossings between cities. Abdi was intent on continuing her education, but when she reached Egypt, she spent the first of her two years there unable to attend school.

"I couldn’t go to school for a year because I was sick and couldn’t pay for it," Abdi says. "I was so sad because I couldn’t finish my education."

That sadness abated when she was granted a visa to enter the United States from her Somali mother, who won the Green Card lottery 16 years prior and was finally able to sponsor her. Although Abdi was able to come over, her sister wasn't so lucky. Her sister was not granted an American visa, and faced a dangerous (and expensive) journey to Europe, where she spent six months in a refugee camp before settling in Holland.

Initially, Abdi experienced some difficulty adjusting to life in Minnesota, where her mother settled amid the Twin Cities' large Somali population. But eventually, she found her stride in Minneapolis, and graduated from Wellstone International High School with a 4.0 GPA.

Last fall in 2016, Abdi started college at St. Catherine University, an all-girl's private school in St. Paul, with the hopes of becoming a human rights and immigrant rights lawyer. "I thought that going to law school would give me the power to give back to those people who don’t have a voice," Abdi explains. "Some people use the law just for business and money, but for me, I have another goal."

Soon after starting school, Abdi got the chance to meet Malala Yousafzai, who won the Nobel Peace Prize for her work as an education advocate for girls worldwide. That meeting in Minneapolis led to the opportunity of a lifetime — Abdi was contacted by the Malala Fund, who works to ensure education for girls across the world, to speak at a series of events before the United Nations during their general assembly in New York.

“I did this through hard work. There are a lot of girls, a lot of people who are refugees that can do even better than me," Abdi said during one of the UN sessions. "They just need the chance to study like me — to have the freedom of education."

But since Trump's shocking election to the presidency, Abdi says she and many of her Muslim friends no longer feel as though America will embrace them.

"I was more scared about the support that Trump gets more than Trump himself. It just makes me feel like everyone I know didn’t like me, they hate me, they have this idea that I’m a terrorist," Abdi explains. "Attacking the Muslim community has affected a lot after the election, a lot of people are saying that they don’t feel safe."

As an immigrant who came to the United States to escape war in two countries, Abdi says she knows firsthand how great America can be — and that Trump's slogan of "make America great again" means something very different to her.

"I know America is great. My mom has been here for 16 years in this great America. I’ve seen how it’s great — not the other 'great' that people are trying to misinterpret," Abdi adds.

With immigrants like Abdi, America already is great — and it's people like her who will lead the growing wave against the xenophobic policies that might very well accompany the incoming administration.