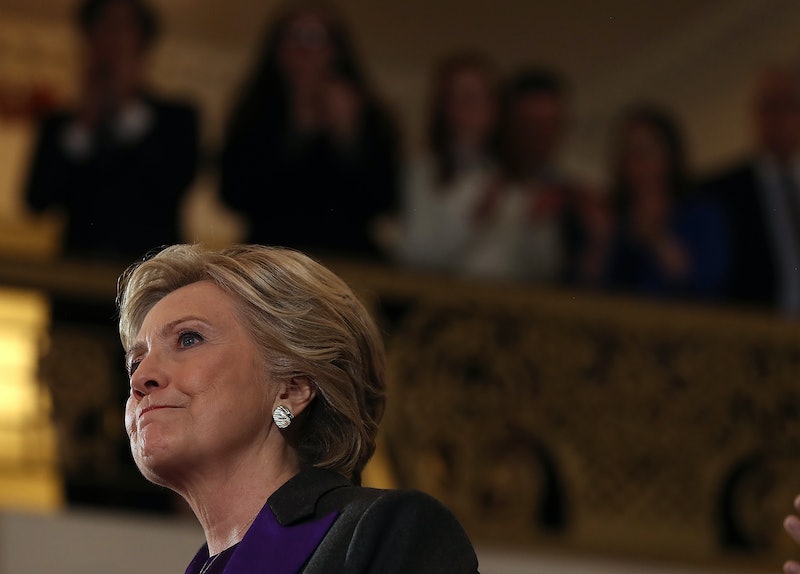 Many of us watched in tears the morning of Nov. 9, 2016 as Hillary Clinton gave her concession speech. Now, nearly a month into the Trump administration, HRC's powerful words of hope have resurfaced, this time, put to music. A young woman turned Clinton's concession speech into an empowering song, and a video of the performance is taking the internet by storm.

13-year-old Isolde Fair, a student at the Sol La Music Academy in Santa Monica, composed the song entitled "To All The Little Girls" as part of an assignment for her all-female music theory class. Fair's teacher, Mary Ann Cummins, doled out sections of text from the address and instructed the class to "write a song based on the inspirational words from Hillary's concession speech," Fair writes on YouTube. What happened as a result is pure magic.

In a filmed performance of the song, Fair sings and plays the piano, while her friends accompany her on strings and vocals. Fair leads a diverse group of talented fellow students, all young women and girls ages 8 through 19, and the performance will send shivers down your spine. While Trump's blatant misogyny and threats to women's reproductive rights have left many Americans angry, hopeless, and depressed, watching these young women work together to create something beautiful is just what we need right now — and let's just say the Internet is feeling all the emotions right now.

I'm not crying. You're crying.

Fair transforms the refrain "to all the little girls who are watching this" into the lyrics to a powerful chorus. "The message is that all girls (and women) should never doubt that they are valuable and powerful and can have their dreams come true," Fair writes on YouTube, and I couldn't agree more.

"To All The Little Girls" was originally posted on Jan. 20, the day of Trump's inauguration, and in its own right feels like an act of protest. In the middle of the performance, images of the young women holding up signs with uplifting messages such as, "I want to be the change," "Dreams can become a reality," and "All Girls Matter," make for a powerful montage:

Since its posting, the song has racked up nearly 67,000 views on YouTube, and has even gained a very important fan: HRC herself. On Wednesday, Feb. 15, Hillary Clinton posted the video of the song to her Twitter account, writing, "Thanks to Isolde Fair & her classmates for this inspiring song. I'm with YOU."

While we may be a long way off from seeing a woman in the White House, if this inspiring song says anything about what the next generation of women, the future looks bright. Now, if you excuse me, I have to go add this song to my playlist for the International Women's Day strike on March 8.