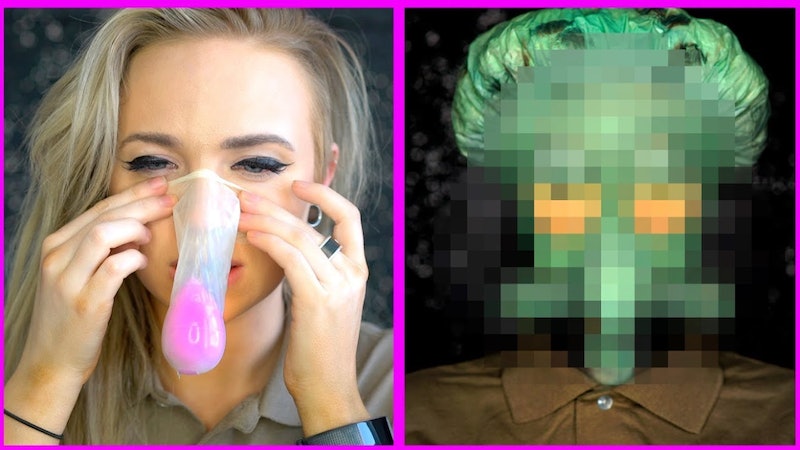 When it comes to viral beauty trends, there are some that are more hilarious than practical. Take the hundred layer trend for example, that layered on things like concealer and nail polish a hundred times over. Or the makeup school supply trend, that used highlighters as real highlighters. And now the newest addition centers around a beauty vlogger who turned into Squidward using drugstore makeup.

Would you want to do that kind of makeup for a Saturday night out? Probably not. Will you cry laughing watching her achieve this transformation? You know it.

YouTubers love a good makeup challenge, so when vlogger "Mykie" of Glam&Gore thought of the idea transforming into a Sponge Bob character using items only found in the drugstore, she was game to dive right in.

Mykie is a self-taught LA based beauty and special effects makeup artist, and her channel is full of FX makeup tutorials and videos, so this test was right up her alley.

The first challenge was to find cheap items that would help her achieve that iconic Squidward head shape, because it wouldn't be enough to just paint her face green, put on a frown, and call it a day. So viewers got to walk the Walgreens aisles with Mykie, watching her contemplate beauty blenders for prosthetic noses, stocking up on green color correctors to create that sea-foam green shade of the character's skin, and playing with foam swords.

After she bought $160 worth of odds and ends that probably confused the cashier — from Trojan condoms, to shower caps, to popcorn — Mykie came home and put on the first part of her costume: a brown polo shirt.

We are on our way.

In the video, she proceeds to show us what she bought and what each item could be used for. And once you see the thinking behind it, it's actually kind of genius.

First up were silicone nipple covers to create Squidward's big eyes, which would be easy to paint over and stick on. The condoms were to create his long, droopy nose, along with a beauty blender pushed to the bottom to give it some shape and structure. As for the odd head shape, she was able to achieve that by using a shower cap on her head, propped up with a big messy bun and half a bag of cotton balls.

But the bulbous head wasn't the only feature of the face she had to tackle. She also had to pin down Squidward's exaggerated frown, which is where a foam sword came in. Cutting off the blade, she was able to whittle down the foam into a cartoon-like mouth that looked exactly like Squidward's. It was like watching FX magic at work, and it was pretty interesting to see how all these random products could be used to bring a cartoon character to life.

Once Mykie hacked how she was going to create the face, she began painting on the skin color, using a mix of cream and shadow products to achieve that minty green hue.

The second half of the video showed the application process, and it was just as hilarious to watch as the first. Mykie began to paste on the crafted nose and lips, bringing the whole image together.

The end result is pretty amazing, if not completely terrifying. It turns out that making a mask out of cotton balls, eyelash glue, and foam creates the Squidward of people's nightmare's.

This challenge was great because it showed people that you don't have to have all the prosthetic materials and expert makeup to try your hand at FX. If you want to play around with the craft, you can start off by going to Walgreens and dipping your toe in that way. It's open to people with all budgets!

More like this
Chrome Nails Were The Biggest Manicure Trend At The 2023 Grammys
By Olivia Rose Rushing
Amanda Gorman’s Makeup Artist Breaks Down The Poet's 2023 Grammys Glam
By Olivia Rose Rushing
Selena Gomez Posted A No-Makeup Selfie & We Stan A Relatable Queen
By Olivia Rose Rushing
Atticus On Poetry, Dating Advice, & His Collaboration With Lime Crime
By Audrey Noble
Get Even More From Bustle — Sign Up For The Newsletter
From hair trends to relationship advice, our daily newsletter has everything you need to sound like a person who’s on TikTok, even if you aren’t.