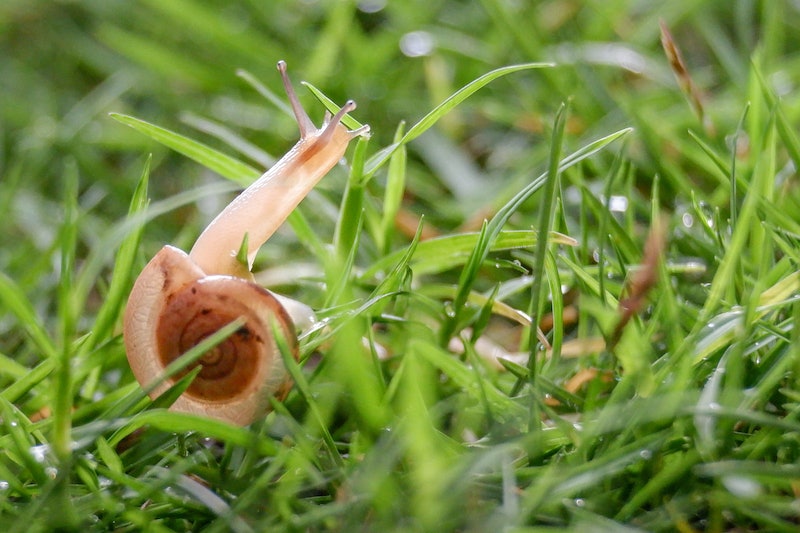 If you were hoping to eventually fall asleep tonight or perhaps ever again, you’re going to want to avert your eyes. There is a video of a “zombie snail” infected with a parasite making the rounds on the internet, and it’s keeping all of Twitter up at night. It’s gross. It’s glorious. It’s going to make you want to never go outside again.

The video, posted by biologist Mike Inouye (@minouye271), shows a snail with what looks like multicolored caterpillars pulsing in its eyestalks and head. If you want to go on thinking that rainbow caterpillars throw disco parties inside of snails for some beautifully symbiotic reason that leaves both entities unharmed, you’re going to want to stop here.

What the video is actually showing is a snail infected with a parasitic worm called Leucochloridium. The parasite uses “aggressive mimicry” to make the snail’s eyestalks look like caterpillars so a bird will eat the snail and, in turn, the parasite, and the parasite can continue to reproduce. As Matt Simon explained for Wired in 2014, “The worm then mind-controls its host out into the open for hungry birds to pluck out its eyes.” To which Twitter responded, “Yeah, that’s gonna be a 'no' for me, dog.”

Let me just say that once more with feeling: there is a parasitic worm that “mind-controls” its host, making the host vulnerable to be eaten. That is as amazing as it is disturbing. As Simon pointed out for Wired, scientists have known about Leucochloridium for over a century. However, it wasn’t until a 2013 paper by biologist Tomasz Wesołowski of Poland’s Wrocław University that their ability to control snails was confirmed.

The study compared healthy snails to snails infected with the Leucochloridium parasite. “The infected snails with pulsating broodsacs behaved differently from their apparently non‐infected counterparts,” the study found. “They moved farther, positioned themselves in more exposed and better illuminated places, situated higher in the vegetation. These alterations of behaviour would be beneficial for the parasites, would increase their visibility (detectability) and accessibility to the potential definite hosts.” Because the parasite isn’t able to reproduce in the snail, the parasite made the snail intentionally put itself in harm’s way in hopes that the snail would be eaten and the parasite could reproduce in the bird’s gastrointestinal tract.

In addition to inevitably causing the snail’s demise, the parasite makes a show of using up the snail along the way. The parasite feeds off the snail’s nutrients and even castrates its host. Reproduction uses energy and the parasites don’t want any of those yummy nutrients going anywhere but in its own parasite mouth hole.

“What is most amazing is that these brood sacs are pulsating only in daylight,” Wesołowski said, per Wired. This is amazing because snails are both unable to see color and are nocturnal. However, the birds the parasite wants to attract hunt during the say. So, the parasite makes the snails active during the day, going against the snail’s natural nocturnal biology. “[ Leucochloridium] have no photosensitive anything—no trace of, say, any nervous system, no sense organs. Nothing. Still they recognize when it’s worth pulsating and when it’s not worth pulsating. So that's very, very unusual. Nobody knows how it's achieved.”

If you’re wondering if we’re dealing with a Walking Dead zombie snail or a World War Z zombie snail or perhaps a zombie snail that moves at a snail’s pace, the research poses a teeny tiny bit of cause for concern. The snails in Wesołowski’s research moved a full 3 feet in just 15 minutes. While you may be unimpressed, Wesołowski said “for a snail, that’s a race,”

“But I rarely if encounter snails,” you scoff. Well, perhaps you have a cat who likes to hunt mice. Did you know “zombie mice” are also kind of a thing? There is a parasite called toxoplasmosis that makes mice lose their fear of cats a la how the snail makes itself readily available for birds to eat. The toxoplasmosis parasite alters brain function in mice, altering the structure of their brain so they are attracted to cats. The hope is, at least for the parasite, that the mouse will get eaten by a cat and the parasite can reproduce inside the cat. While toxoplasmosis will do little harm to your cat, it can affect human owners in rare cases.