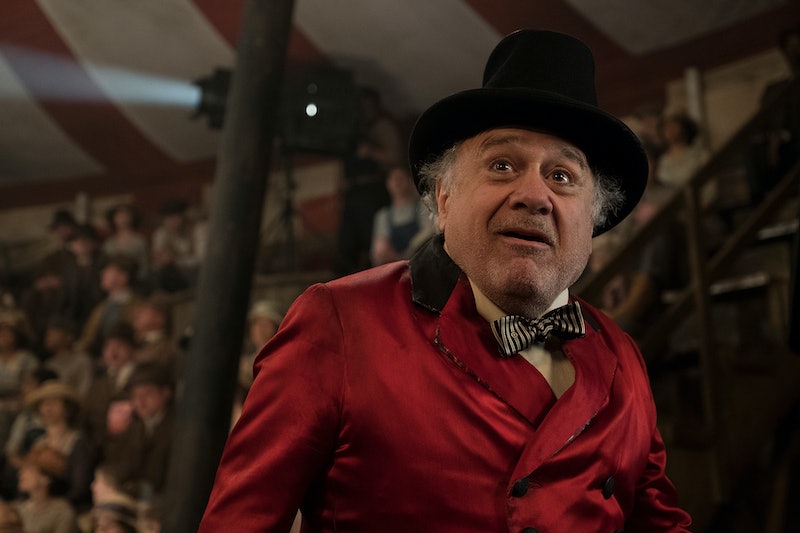 "This is the completion of the 'Circus Trilogy,'" laughs Danny DeVito on the set of Tim Burton's Dumbo in mid-September of 2017. The actor, who plays Max Medici, is out of costume, donning a Democracy Now! cap instead of a stovepipe, and talking to reporters about everything from Disney Blu-Ray special features to why working with a CGI pachyderm isn't too different from working with the child actors on Matilda. Most importantly, he and Burton are the first to make the joke that became a meme after the Dumbo trailer was released — they're well aware that ringleader is kind of the actor's typecast at this point.

This is DeVito's fourth Burton film, but in Dumbo, Big Fish, and as the Penguin in Batman Returns he plays some kind of showman in some kind of circus. The only anomaly at this point in time is Burton's Mars Attack! "I went to Vegas for four nights," DeVito recalls about their sophomore outing as collaborators, the 1996 alien invasion comedy. "What’s bad about that?"

"When [Burton] called," DeVito continues, "he said exactly that, 'We gotta complete the trilogy' — and I was so excited because I’m a big fan of Dumbo’s and I love Tim. I would do anything to be in a movie with him. I dunno why he thinks of me for [ringleaders]. But what are we gonna do next? Who knows? Something really weird — an understatement."

Browsing social media, you may find more fans wondering if Burton has set Dumbo in the same universe as Big Fish, his 2003 fairytale about a son with a father who likes to stretch the truth, than pointing out the "trilogy" of it all — primarily because of the bright red jacket that he wears as Medici in Dumbo and as Amos Calloway in Big Fish. While the Penguin does lead a circus troupe in Batman Returns, his look is black and white.

The biggest difference between these fictional ringleaders of course, especially when it comes to Batman Returns, as DeVito's former co-star Michael Keaton is also in Dumbo... is that this time, he's not a villain.

"We’ve done a couple movies together, Michael and I," DeVito says, "but the last movie with Tim and Michael and I… of course we’re both in suits. I was in the Penguin suit and he was in the Batman suit. He was playing the Good Guy in that movie. I’m the good guy with this movie! So it’s a little bit of an evolution here."

In the live action remake set in 1919, DeVito's character Medici — "if you’re from England you say Med-i-chi (or New Jersey probably) but I say Med-ichi," he says — is struggling to maintain a traveling circus. Any bad decisions he makes are due to the enormous amount of pressure he's under. There's not an act of malice in sight. That's what Keaton's Vandevere and his henchman Skellig, played by Joseph Gatt, are for in the film.

What are we gonna do next? Who knows? Something really weird — an understatement.

Whether he's called to play a good guy or otherwise, it's clear that DeVito and Burton are good friends — the kind of friends that pick right back up where they left off, DeVito tells us.

"I get emotional thinking about how much I care about him," says DeVito. "Always spirited, always an artist, always thinking about the craft, always just painting with his mind and it feels like… I’m part of a kind of some kind of palette or color scheme in Kandinsky’s world or something."

When Colin Farrell joins on set, earlier in the day, he remarks that "it seems like Tim has his own little traveling circus of a kind going on. It’s just nice to be part of it," he says." Even his character, circus performer and war veteran Holt Farrier, has a side part that will remind you of other Burton heroes that came before him, like Ewan McGregor in Big Fish. He fits right into the Burton-verse too.

Maybe that's why these actors pop up in familiar roles again and again. They're part of a big picture troupe — one that's willing to make changes or turn villains into heroes, all the while, staying ahead of the joke. Dumbo is in theaters March 29.