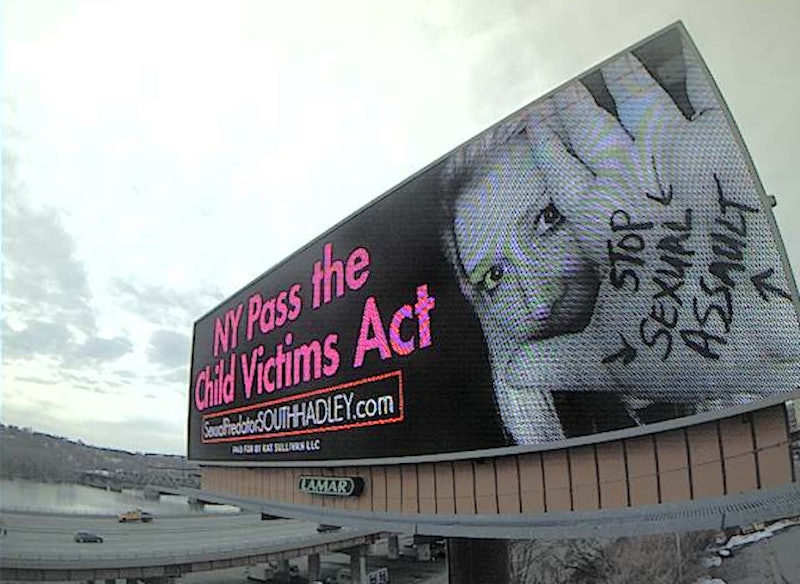 Once in a while, life imitates art. The Oscar-winning film "Three Billboards Outside Ebbing, Missouri" inspired one woman to put up billboards of her own to out the man she says raped her in the late '90s, when she was a student at an all-girls boarding school in New York. But Kat Sullivan's billboards aren't just about calling out her alleged rapist. She's also using them to demand that the state of New York change the laws she faults for preventing her from going after him in court.

"There's a huge part of me that is always going to be furious and the only thing I can do is transform the rage into something effective," Sullivan tells Bustle. "There's nothing else I can do with it."

Sullivan says she'd always dreamed of using a billboard to out the male teacher she claims raped her in 1998, while she was a student at the Emma Willard School in Troy, New York. But it wasn't until Sullivan saw the film Three Billboards Outside Ebbing, Missouri, in which the main character commissions billboards to raise awareness of her daughter's unsolved murder, that Sullivan realized her dream could in fact become a reality.

"Three Billboards was playing on the plane and as I'm sitting there, I mean, I swear to you, I was like, I want billboards. I want them. That's it," Sullivan says. "I was actually frustrated because I was sitting on a plane feeling like I have to do this but I can't; I've got to wait two hours for the plane to land and then it's 11:00 at night so you're not doing anything today." Sullivan says that as soon as she was able, she began building a webpage and contacting advertising companies.

"I hope that somebody sees that billboard and they're like, 'damn straight,' but then also that they take that and are like, 'what can I do?'"

While she's taken a unique approach to sharing her experience as a sexual assault survivor, the way Sullivan's journey began is anything but. According to statistics from the anti-sexual violence organization RAINN, Child Protective Services found evidence indicating that, from 2009 to 2013, 63,000 children a year were victims of sexual abuse nationwide. Yet the rate of child sexual abuse is likely far greater than that, as many incidents go unreported to authorities, according to the National Center For Victims of Crime.

When Sullivan did decide to report her attack to authorities in 2016, more than a decade after the alleged incident occurred, she says she was told the statue of limitations had run out and she had no legal recourse. "I was just so frustrated," Sullivan tells Bustle.

Eventually, she connected with a group of survivors working to pass New York's Child Victims Act. Now, she's hoping her story — and her billboards — inspire state lawmakers to change the laws she blames for keeping her from taking action against the man she says attacked her.

While Sullivan has never been able to take legal recourse against her attacker, the Emma Willard School mediated a settlement with Sullivan after she went public with her story in 2016.

"We feel grief and compassion for anyone who experienced harm in the past and we are committed to the continued work that is necessary to keep our students safe," the Emma Willard School said in a statement to Bustle when asked about Sullivan's billboards. "We commend and support the survivors of sexual abuse who are committed to affecting change around this important issue."

The three billboards — all of which are digital — cycle between a series of messages. One reads, "My rapist is protected by New York State Law. I am not. Neither are you. Neither are your children." Another reads, "NY pass the Child Victims Act." The last message reads, cryptically, "The truth will be revealed." All of them direct viewers to Sullivan's website, which provides phone numbers for New York state senators who oppose the Child Victims Act, as well as information about the legislation and Sullivan's personal story.

While Sullivan hopes to warn the communities her alleged rapist may have lived or worked in about him, her ultimate priority in renting billboard space is to encourage New Yorkers to push the state Senate to pass the Child Victims Act.

"I hope that it helps," Sullivan tells Bustle. "I hope that somebody sees that billboard and they're like, 'damn straight,' but then also that they take that and are like, 'what can I do?'"

Currently, New York has one of the country's narrowest reporting laws for victims of child sexual abuse, requiring victims to report and sue by the time they turn 23. The Child Victims Act, however, would significantly expand the statues of limitations for reporting child sexual abuse to age 50 in civil cases and age 28 in criminal cases. The bill also seeks to create a one-year "look back" window that would enable survivors over the age of 23 to take retroactive civil action against their attackers.

Supporters are pushing to include the act in the state's budget, which has to be finalized by Sunday. But even though the act enjoys the support of New York Gov. Andrew Cuomo and easily passed the state Assembly, it's in jeopardy of once again failing to become law due to opposition from Republicans in the state Senate.

According to the New York Daily News, New York state Senate Majority Leader John Flanagan told reporters Monday that while the act was still being discussed, he did not see it being a part of the final budget deal. Sullivan says that although many Republican state senators are opposed to the "look-back" window included in the bill, it's a critical piece of the legislation because people like her alleged attacker are still out there.

"Trashing him on billboards for four weeks really doesn't do anything," Sullivan tells Bustle. "I mean, he could go work somewhere in — pick a state — that didn't hear any of this, that don't know about the website, that didn't hear any of the coverage. If there was a court of law, that would follow him. It would be a public record if he was convicted in civil court, and that's why this is important."