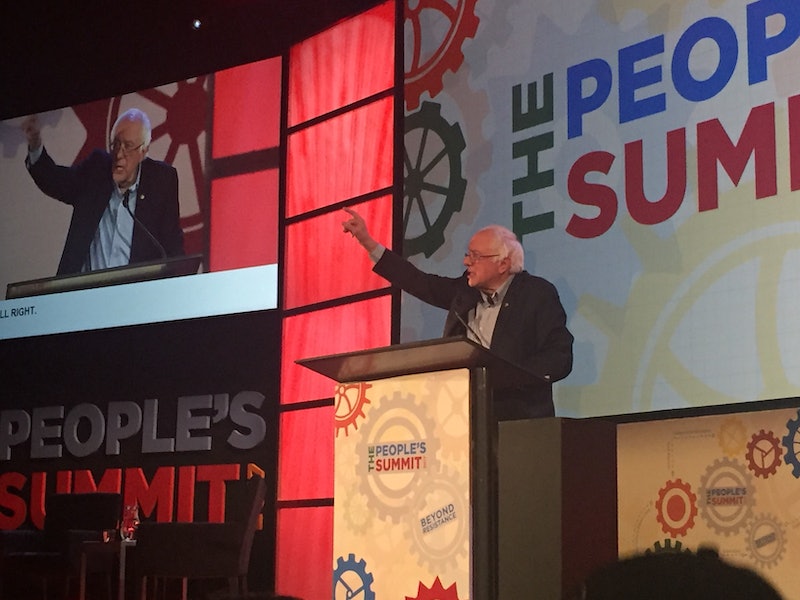 He may not be the leader of the free world, but to the 4,000 activists gathered at The People's Summit in Chicago, Sen. Bernie Sanders reigns supreme. The former presidential candidate and senator from Vermont headlined the progressive activist conference Saturday night, drawing whoops, hollers, and standing ovations from the crowd that fought alongside him on the road to the White House. Sanders' new calling: turning the 'resistance' movement into action in the face of a president he's called a "fraud."

Sanders took aim at President Trump, the Democratic Party, and the outsized role of corporations in American politics, hitting the major themes from his campaign stump speech and introducing some new ones.

"What I find beyond belief is [Trump’s] incredible hypocrisy," Sanders says. "This is man who ran for president telling the people of this country that the was going to stand up for the working class. That he was going to stand up the political and economic establishment. And then then once he got elected and without a second’s hesitation, he brings more billionaires into his administration than any president in history and he hires the former President of Goldman Sachs to be his chief economic adviser."

To hear Sanders supporters in the Arie Crown Theater at Chicago's McCormick Place tell it, the time for mourning the results of the 2016 election is over, and the time for organizing is now.

"There's only so much that you can rally to resist," Jenny Marineau, a 28 year-old from Greensboro, North Carolina, tells Bustle. "What's really going to build long-term power is people fighting for a vision that works for them in their lives."

In President Donald Trump, Sanders has a foil in the limelight. The Vermont senator is quick to seize on policy proposals that he says shows Trump abandoning the working class, like on health care and the upcoming budget.

“Trump’s budget is the most massive transfer of wealth from working people to the billionaire class that we have ever seen in this country,” Sanders says.

Sanders supporters are feeling emboldened after the U.K.'s Jeremy Corbyn led the Labour Party to victory this week. The Sanders-style-socialist denied Prime Minister Theresa May a Conservative Party majority in Parliament, and with it, a mandate to govern. Written off by the establishment and behind in the polls, Corbyn has Sanders supporters wondering what could have been.

"Jeremy is not a super charismatic guy. He's a frumpy, nerdy socialist who never really had power, and the fact that he came back from a 20 point deficit because of the platform that Labour put out is so transformational," 25 year-old Brooklyn resident Guido Girgenti tells Bustle.

"It shows a politics of hope and a politics of leaving no one behind and not compromising with big banks and big pharma," Girgenti says. "I think we could be in a very different place in the United States if we would have followed that kind of politics."

Katrina vanden Heuvel, editor of The Nation magazine told activists Saturday morning that "the establishment everywhere has failed," and that Corbyn supporters in Britain "are championing ideas that were very central to the Bernie Sanders campaign."

Sanders, who spent the last few days in the UK and Ireland with his wife, congratulated Corbyn and his team on their accomplishments.

While The People's Summit drew attendees from 49 of the 50 states, Sanders laments that the Democratic Party isn't as diverse, and blames the Democratic leadership for failing to speak to the needs of middle-class Americans from all backgrounds.

"Today in almost half the states in America, the Democratic Party has almost no political presence at all," Sanders says, calling it "a failed model."

His campaign garnered more than 13 million votes during the Democratic primary, winning the votes of people under age 40 in nearly every state.