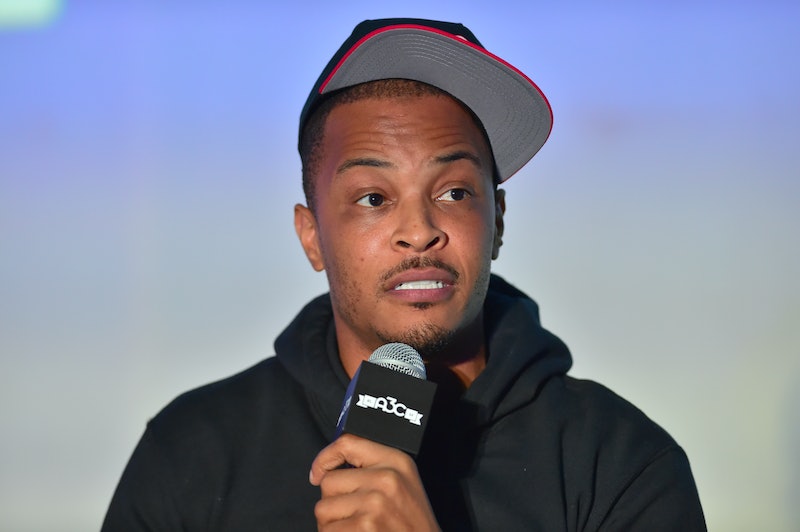 Most visits to the gynecologist are private between a patient and their doctor, but rapper T.I. takes his daughter to the gynecologist to "check her hymen" on an annual basis. The musician — whose real name is Clifford Harris Jr. — dropped this shocking revelation during an an appearance on the Nov. 5 episode of the Ladies Like Us podcast and the backlash has been swift. (Bustle has reached out to reps for both T.I. and his daughter, Deyjah Harris, about his comments, but has not received a response.)

T.I. admitted to "yearly drops to check her [his daughter's] hymen" after hosts Nazanin Mandi and Nadia Moham asked if he had the "sex talk" with his eldest daughter, 18-year-old Deyjah Harris. "Yes, I go with her," he added. The rapper apparently began this annual tradition the day after Harris' sixteenth birthday. As he told Mandi and Moham, on their first visit the day, he went into the exam room with his daughter and was present when the doctor made Harris sign a waiver "so we can share information." He then jokingly asked his daughter, "Is there anything you would not want me to know?"

Though he insisted that doctors informed him that it is possible for someone to break their hymen in ways other than sexual penetration, "like bike riding, athletics, horseback riding, and just other forms of athletic physical activity," T.I. said he didn't care. "Look, Doc, she don’t ride no horses, she don’t ride no bike, she don’t play no sports," the rapper recalled responding, "Just check the hymen, please, and give me back my results expeditiously." He then added, "I will say, as of her 18th birthday, her hymen is still intact."

In response, social media users were quick to call out the rapper for having his daughter's hymen analyzed — a violating, and ineffective routine. In addition, many also pointed out that a broken hymen isn't an indication of sexual activity.

Dr. Jen Gunter — an OB-GYN and author who has often called out myths and misinformation surrounding vaginal health online — created an entire Twitter thread posted as a response to T.I.'s comments. "The hymen is no virginity indicator, 50% of sexually active teens do not have a disrupted hymen. The hymen is often very flexible," Gunter wrote in part. She wrapped up her thread by unequivocally dismissing T.I.'s decision to have his daughter "checked," concluding, "the hymen means nothing physically and hymen exams are medically not a thing and are unnecessary. And support a disgusting patriarchal trope."

Focusing a woman's sexual worth on whether or not her hymen is broken is not only ineffective, but also an extremely heteronormative take on sexual activity. "It gets ridiculous when you think, OK, if someone is a lesbian, knows they’re a lesbian from day one, and has never had sex with a [person with a penis], are they going to be a virgin until the day they die?" Alexandra Eisler, a health and sex educator from Healthy Teen Network told Teen Vogue in an article published in July. "If someone only has anal sex but not vaginal sex, are they still a virgin?" Eisler continued, noting that "there is no medical definition for virginity."

The social importance of virginity has resulted in the practice of "virginity testing," in which a woman's hymen is examined in order to prove that she has not had sex. And, according to some experts, it can become part of a harmful social structure. "A woman’s or girl’s body isn’t really her own," Deborah Ottenheimer, M.D., an OB-GYN and director of the Women’s Holistic Initiative at Harlem United Community Health Center told Marie Claire recently. "[It’s] all linked up with other kinds of human-rights abuses against women," she continued. "If you devalue a woman’s body to that degree, you’re most likely [going] to abuse it in other ways too."

Many might consider the idea of virginity tests to be old-fashioned, but the practice remains to this day, though Ranit Mishori, M.D., a professor of family medicine at Georgetown University School of Medicine, told Marie Claire that the exams are often performed "under the radar." Still, the procedure is so invasive — and sometimes traumatic — that in October 2018, the United Nations called for an end to "virginity testing" everywhere, describing it as "a violation of the rights of girls and women," and stating that there is "no scientific or clinical basis" for the tests.

T.I.'s comments perpetuate the very false idea that a person's sexual activity can be determined by looking at their hymen, despite the fact that scientific evidence proves otherwise. Furthermore, it perpetuates the equally incorrect. idea that a woman's entire worth is wrapped up in their virginity.

More like this
Rachel Zegler Reveals She Had Breast Cancer Scare
By Radhika Menon
Ryan Reynolds Shared His Colonoscopy On The Internet After Losing A Bet
By Jake Viswanath
Self Esteem's “F*cking Wizardry” Is An Anthem About Knowing Your Worth
By El Hunt
Dixie D’Amelio & Noah Beck “Love Each Other” Despite Breakup Rumors
By Julia Emmanuele, Jordyn Tilchen and Grace Wehniainen
Get Even More From Bustle — Sign Up For The Newsletter