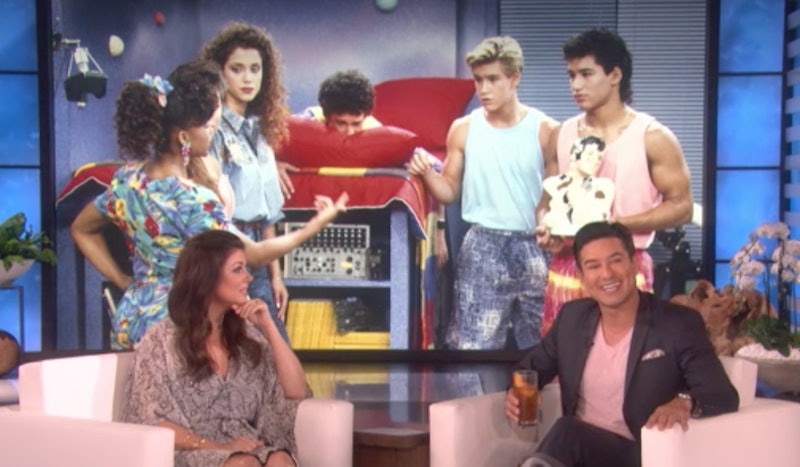 On Thursday's The Ellen DeGeneres Show, Saved by the Bell's Tiffani Thiessen and Mario Lopez reunited. Lopez filled in as host for Ellen DeGeneres, and he had Thiessen come on as a surprise for the audience. Their mini-Bayside High School reunion turned into a hilarious conversation about how Thiessen and Lopez's kids feel about Saved by the Bell. Spoiler: One loves the comedy that debuted in 1989, and the others aren't into it at all.

For Thiessen's oldest daughter, 8-year-old Harper, she can't get enough of the series, but not because she loves her mom's character, Kelly Kapowski. Actually, Harper is crushing hard on Zack Morris (Mark-Paul Gosselaar) and A.C Slater (Lopez).

"Oh, Harper was into it," Thiessen told Lopez. "She wanted to keep going. She was so into you and and Mark-Paul." She continued, "She's so boy crazy already. Oh, I have trouble. I have some trouble."

It's been 30 years since the beloved teen series first aired and looking back, there's no denying Saved by the Bell's male romantic leads were sometimes problematic. That said, many fans who grew up watching the show couldn't get enough of Zack and Slater, so Harper definitely isn't alone in her feelings for them.

Thiessen also explained she let Harper watch the first season, but once kissing between the characters began, she pumped the brakes until her eldest child gets a little bit older.

"Harper started watching it a tiny, tiny bit," Thiessen discussed with Lopez. "I was OK with Season 1, but then after that when like kissing started happening, I was like, 'No, no, no we're done.'" She added, "I mean, she's 8, you know?"

As for Lopez, well, his two kids are on a very different page than Harper. Lopez is the father of Gia, 7, and Dominic, 4, and they would rather be doing anything else than watching Lopez portray Slater. Sorry, Mario!

"My kids have given it a shot and [they’re] not feeling it," he admitted. Oh, and they also don't understand Slater's curly mullet. Lopez told Thiessen that his kids will ask, "Daddy why is your hair like that?"

The late '80s and early '90s were a long time ago for kids who are now growing up in 2018, so, of course, they wouldn't understand a mullet. However you feel about the hairstyle, let's all admit that Lopez totally pulled it off at the time.

Thiessen responded, "We are old, we are really old." To that, Lopez told her, "Yeah, but you look good, honey." When the series first premiered, they were just teenagers. Now, Thiessen and Lopez are 44. A lot of time has definitely passed since then. And, yes, Lopez is correct, Thiessen looks amazing. Really, they book still look like their characters, you know, minus the mullet.

Whether or not their kids love or hate the show that made Thiessen and Lopez famous, fans will always remember and adore them for playing Kelly and Slater.