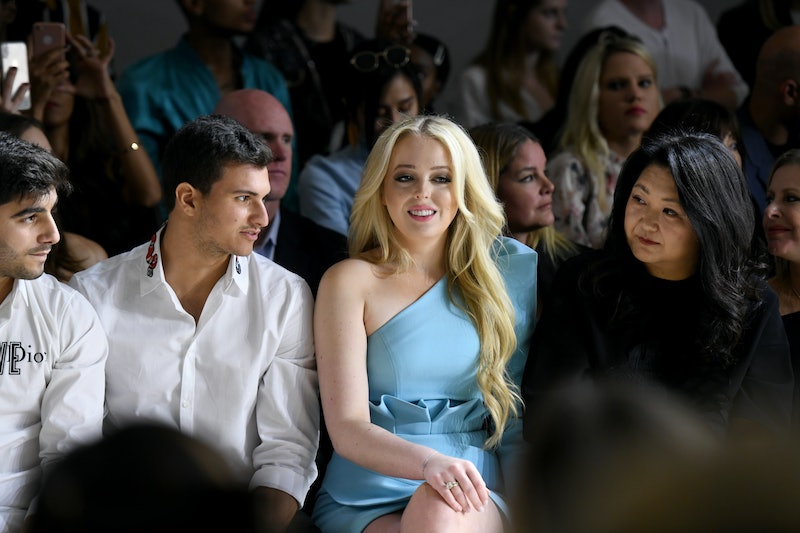 Covering security costs for the first family can be quite expensive. And, according to Quartz, first daughter Tiffany Trump's spring break in Serbia cost taxpayers quite a bit, proving to be no exception. According to documents obtained by the news outlet, Trump's trip consumed at least $23,000 of taxpayer money.

Financial documents obtained by Quartz indicate that the $23,000 covered "security, communications, logistics, and operations," including the cost of putting such staff members up in a hotel. Said staff members stayed at the Square Nine hotel in Belgrade, according to the report. Per the document, the government paid for 120 room nights overall.

The sum logged in the document, which was titled "Acquisition of hotel accommodations in support of Tiffany Trump travel," covered hotel costs spanning from March 7 to March 16, 2019. Those dates coincided with spring break at Georgetown Law, where Trump is currently a student. Bustle has reached out to the White House for comment.

Trump posted at least one photo of herself in Serbia to her Instagram account. In the image, she is seen posing with a statue of a man standing on a pair of steps. Trump is standing on one leg and apparently laughing, looking at something outside of the frame. The caption, according to Quartz, reads "greetings from Serbia."

As Business Insider reports, all Trump children may use Secret Service protection when they are traveling. This is true even after presidents leave office, until those children are 16 years old, according to CBS News.

However, rules governing who gets Secret Service protection can change over time. For a while, presidents weren't offered indefinite protection after leaving office — that benefit lasted only 10 years. President Barack Obama changed that in 2013 when, according to CBS News, he signed a law that would grant lifetime Secret Service protections to presidents, even after they leave the White House. Congress had shortened that eligibility in 1994 in an effort to cut costs, according to CBS.

The available documents provide no insight into whether or not Trump could opt in or opt out of having Secret Service accompany her on her spring break excursion to Serbia. But, it's no secret that presidential security is incredibly tight, and especially so in the age of social media, when whereabouts and travel habits may be so easily tracked by outside observers.

The Quartz report also indicated that, per local media reports, Trump spent time with her boyfriend while she was abroad. Indeed, local media outlets posted several photos of the pair walking down the street together. Her boyfriend, Michael Boulos, posted a photo of himself in Serbia on March 15, when the trip to Belgrade was about to wrap up, according to the governmental documents obtained by Quartz.

Whether or not Trump will continue to rack up similar security-related travel bills waits to be seen, although it's important to put the figure into perspective. The Quartz report notes that the adult Trump brothers have cost taxpayers hundreds of thousands of dollars for their own trips. When it comes to keeping members of the first family safe, it's clear that it comes with a cost.