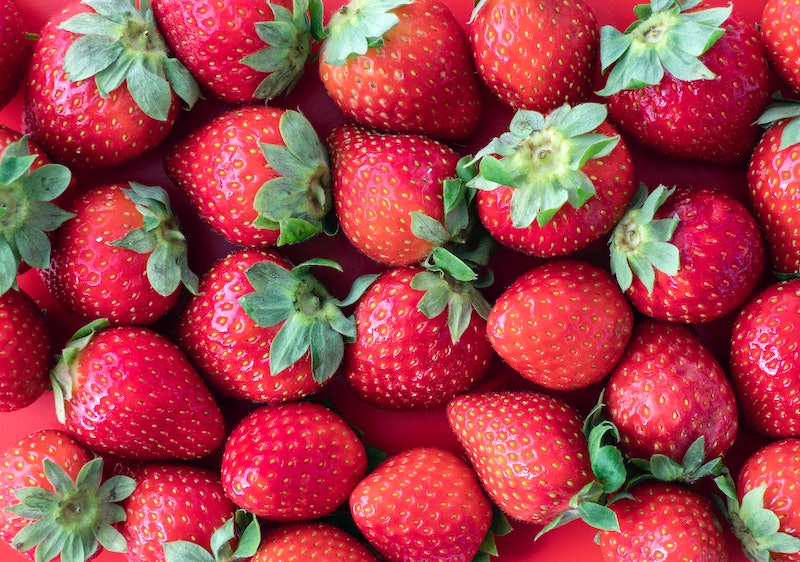 As if the world doesn't have enough to worry about right now, a TikTok went viral in May in which strawberries soaked in salt water suddenly released a lot of little bugs. The video prompted a lot of people to suddenly panic that their pandemic-specialty strawberry tarts could have unexpected extra ingredients. Experts tell Bustle that there's no reason to worry. Your strawberries won't commonly have small bugs in them, and if they do, chances are that they're completely safe to consume.

If you're asking whether all your strawberries contain secret insect friends, the answer is no, Kathleen Demchak, a senior associate at the Plant Science department at Penn State University's College of Agricultural Sciences, tells Bustle. "As strawberries develop, there simply isn’t a way for insects to get in without making holes — though admittedly, they can be very tiny — in the surface of the fruit or the berry cap," she says. If you look closely at your berries and see they're firm and intact, there's pretty much zero chance there are bugs inside.

So how did the bugs get into the fruit in the video? "The consensus seems to be that the culprit was spotted wing drosophila, an invasive fruit fly that’s been present in the continental U.S. for about a decade," Demchak, who specializes in fruit fly research, says. Surprisingly, though, just because they're there doesn't mean the strawberries are unsanitary. "The berries are still safe to eat," she says.

You've likely eaten more bugs in your fruit than you think, with no ill effects. "When we eat any food, animal or vegetable, we are actually consuming many different types of organisms, bacteria, fungi, and yes, sometimes insects or parts of insects," Michael Raupp Ph.D., professor of entomology at the University of Maryland, tells Bustle. He points out that insect life is on the menu in many parts of the world, and is widely viewed as nutritious and healthy protein. Demchak adds that some insects are often good for fruit, as they keep other predators and problems at bay. Bottom line: those bugs aren't going to hurt you.

The strawberries in the video probably shouldn't have made it into those TikTokers' kitchens, though. Doug Yanega Ph.D., senior museum scientist in the Department of Entomology at the University of California, tells Bustle that the U.S. Department Of Agriculture (USDA) has strict limits on how strawberries that may have encountered bug life can be sold. Even the lowest grade of strawberries, according to USDA guidelines, can't have any serious damage from insects. "If there are strawberries being sold with small insects inside them, then I would assume that it is either so rare as to be well below the USDA guidelines, or they are being sold by vendors who are bypassing the USDA inspection and grading process," Yanega says. Your garden strawberries, or the ones found at the farmer's market, might have slipped through the net.

If you're worried about all of your strawberries, Demchak says you shouldn't be. Aside from USDA regulations, spotted wing drosophilia don't survive winter very well, and also hate really hot conditions, so they don't actually endanger strawberry season. "Washing your produce is always a good idea, and if you purchase berries and actually do find small insects in them, let the folks where you bought the berries know so they can take safe steps to correct the problem," she says.