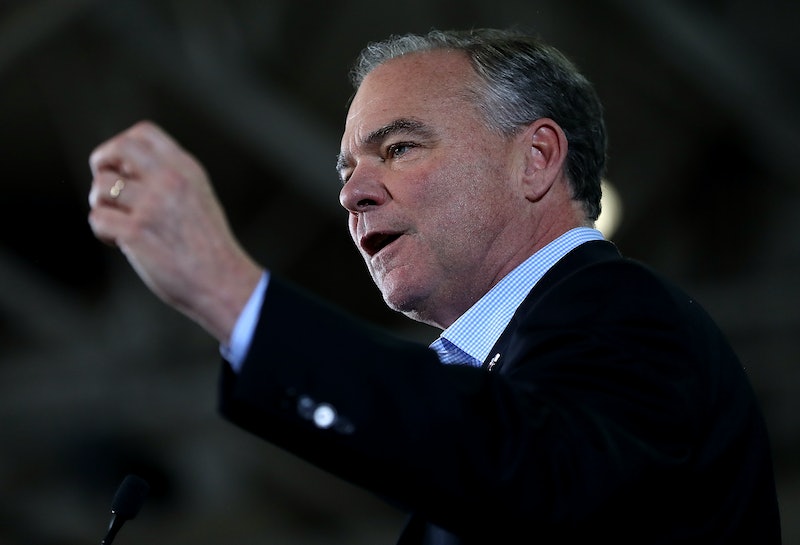 When America's military service members were faced with widespread unemployment five years ago, lawmakers like Sen. Tim Kaine sprang into action to get those who sacrificed for their country back to work. Now, the Virginia Democrat says the same unemployment crisis is plaguing military spouses, a group of women and men — but mostly women — whose professional futures are tied to their partners' careers in the armed services.

Kaine tells Bustle that between 12 and 25 percent of military spouses are unemployed; that range is so broad because the government doesn't actually measure the statistic in any formal way. "If you’re not measuring it, it’s because you don’t care enough about it," he says.

The former vice presidential nominee has been working with women in his home state to level the playing field and make sure more military spouses are able to pursue careers in the face of red tape, periods of single parenthood, and having to constantly relocate their families. Kaine's military spouses initiative also serves as a model of the kind of proposal that could help Democrats earn women's votes in this year's midterm elections and beyond.

While more women voted for Kaine and Hillary Clinton than for Mike Pence and Donald Trump in 2016, the same can't be said about white women voters. Fifty-three percent of that group backed Trump, despite Hillary Clinton's place in history as the first woman nominated by a major political party. As Clinton's running mate, Kaine had as close a view into what happened as anyone — but he seems just as bewildered about it today as Democrats were two years ago. "As I look back on it, that’s one of the ones that I just really scratch my head about," he tells Bustle.

While the senator has his own take on the role former FBI Director James Comey played in the outcome of the election, he also offers insight into how the party can build inroads in the years to come with those women voters it did lose.

An Issue That Hits Home — Literally

T.T. Robinson lost count of the number of resumes she sent out after her husband, a Navy helicopter pilot, moved to Guam on military orders eight months after they married. Despite having top-level government experience and a degree from a Harvard executive education program, Robinson says she sent out somewhere between 50 and 100 job applications during her first six months in Guam — a search she remembers as "soul-crushing."

"You think that it’s going to be this really patriotic thing to hire a military spouse, and then you realize that companies aren’t seeing it like that," Robinson tells Bustle.

That point was hammered home when she showed up to interview for a job she'd already held in Washington, D.C. Robinson got the interview almost immediately after sending in her application. She remembers that the man she met with seemed really excited to talk to someone with her background — until he asked what brought her to Guam.

"I think that people right away, as soon as they hear you’re a military spouse, [people] assume you’re going to be leaving in the next couple of months and think it’s not worth investing in you because you’ll move," Robinson says.

Kaine's Military Spouse Employment Act and the Jobs and Childcare for Military Families Act earned the kind of bipartisan support that's rare in this political climate. The bills aim to help military spouses by making it easier for federal agencies to hire them for jobs around bases; expanding child care on base and making off-base care more affordable; supporting continuing education; and offering counseling and transition assistance. The legislation also encourages military bases to offer more opportunities to engage in entrepreneurship. The bills are included in this year's National Defense Authorization Act and are on their way to becoming law.

The issue hits home quite literally for Kaine. As the father of an infantry commander in the Marine Corps, Kaine tells Bustle that he's also been concerned that his daughter-in-law, an attorney, could face the same kind of challenges as Robinson.

"Different states have different rules about whether, if you move, does your law license transfer or not," Kaine says. "And I can tell you that for [my son], now being married, employment issues for his wife will be a critical factor in his decision about whether he stays in the Marines or not."

The senator took up the issue after meeting military spouses at a community college in Hampton, Virginia a year and a half ago. One of the participants, Lakesha Cole, was Kaine's guest at this year's State of the Union.

"I always thought I spent more time explaining why I moved so much versus explaining why I’m the best person for this job," Cole remembers about going on job interviews. "What I will say after the 20th interview, you do get pretty skilled at sort of pivoting those conversations or shifting those conversations back to you and back to your skill set. You get really good at selling yourself, because you don’t have any other choice."

Cole's ability to sell herself is how she makes a living now. She owns a boutique called She Swank Marketplace in Jacksonville, North Carolina, near Camp Lejeune Marine Corps base. The boutique gave Cole the flexibility to maintain the career she wants and generate a second income for her family. With her success, she's even been able to allow other military spouses to sell their products through her store.

Entrepreneurship is a lifeline for many military spouses because they relocate so frequently that, to potential employers, it looks like they can't hold down a job. Service members are reassigned every two years on average. Robinson says that prospective employers can fail to recognize that even though military spouses don't serve, they do sacrifice.

"You’d think that, you know, as an independent woman, you’ll never base your career around your husband’s moves, and unfortunately, the military dictates that you kind of have to," she says. "The thing that I think people don’t recognize is that military spouses are a force... if we can handle a ten-month deployment with kids at home and still finding a job, we can handle any project that you want to throw our way."

Before Kaine took up the cause of military spouses, he served as one-half of the first woman-led major party presidential ticket. With Hillary Clinton at the top of the ticket, Democrats expected to win the support of a majority of women voters. While Clinton did lead among women by more than 10 percentage points, she ultimately lost a majority of white women voters, who went for Donald Trump.

"As I look back on it, that’s one of the ones that I just really scratch my head about," Kaine tells Bustle. "That women, looking at a Donald Trump, who bragged about physically assaulting women, and a Hillary Clinton... especially white women..." he trails off. "Women of color overwhelmingly supported Hillary, but the white women looking at the combination, the choice, between the Donald Trump or Hillary Clinton, felt comfortable choosing Donald Trump. I have a hard time explaining it. I really do."

For Kaine, this subject conjures up some of the scenes that became fixtures on the 2016 campaign trail, particularly the "lock her up" chants that Trump supporters took up at every mention of Clinton's name. That chant actually resurfaced in Kaine's own re-election race this month, at a primary victory party for his Republican opponent, Corey Stewart.

It's possible that the recently-released Justice Department inspector general's report on how the FBI handled the investigation into Hillary Clinton's use of a private email server breathed new life into the chant. Among other findings, the IG report criticized former FBI Director James Comey for breaking protocol to speak publicly about the Clinton investigation, including just 11 days before the election. Democrats say that hurt Clinton's election prospects, but Kaine goes further, calling it "a massive double standard."

Now, Kaine is focused on the factors Democrats can control in order to pave a path forward with the voters it lost. As midterm election day approaches, he tells Bustle he's practicing what he preaches, pointing to the influence of women leaders in his campaign and senate staff. His own re-election campaign manager, Keren Dongo, is a millennial woman who's worked with him for seven years, and his senate office leadership team is mostly women.

While his senate staff works to elevate the concerns of Virginia voters, Kaine says the voters themselves often supply the solutions to those concerns, as was the case with the military wives who inspired his legislation.

"I think it begins with listening," Kaine says. "Listening to concerns and then being creative about addressing them. I tend to feel like good policy is good politics."