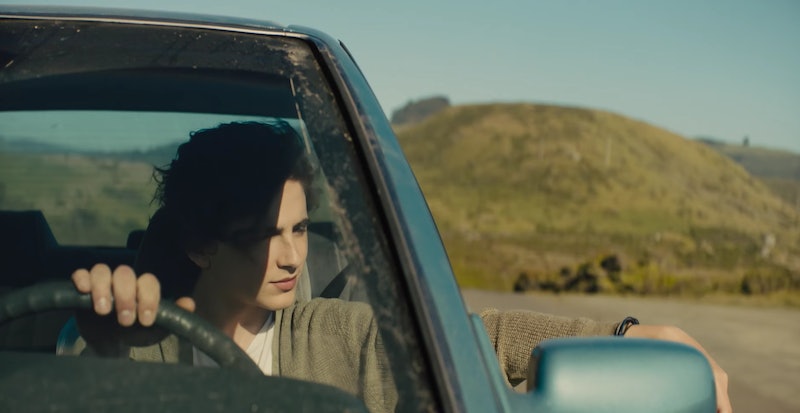 The first trailer for Timothée Chalamet's new movie, Beautiful Boy, was released on Wednesday, and despite the fact that the clip is a tearjerker, it will make fans of The Office very happy. The emotional film also stars Steve Carrell and Amy Ryan, and Beautiful Boy is the Office reunion you have been waiting for, bringing Michael Scott and Holly Flax back together.

Unfortunately for Michael-Holly shippers, they're not together together in Beautiful Boy. The film, which is based on the memoir of the same name by David Sheff and Tweak by his son Nic Sheff, follows Chalamet's Nic as he struggles with his addiction to methamphetamines and chronicles his relationship with father, played by Carrell, and his family and they try to cope. Ryan plays, Vicki, Nic's mother and David's ex-wife, who has been largely absent from her son's life since David won full custody, but who reappears in order to help David help Nic. (Definitely not the future fans envisioned for Michael and Holly at the end of The Office.)

The last time fans saw Michael and Holly, he was proposing to her in a room full of candles — that were then unceremoniously extinguished by the office sprinkler system — and later moved to Colorado, got married, and had kids. As soon as the Beautiful Boy trailer dropped, the show's viewers took to Twitter to share their feels at seeing one of the NBC hit's OTPs back on screen.

Fan @gwyndujour wrote, "Omg Michael and Holly’s son grows up to be addicted to pills and is also Timothee Chalamet ALSO almost just sobbed @ my desk watching the trailer." And @BDesque tweeted, "It’s a shame to see that Michael and Holly didn’t work out."

Meanwhile, @kaitlinbstevens also said, "Ok as if I couldn’t already love Beautiful Boy enough because I know Timothee is going to nail his role and tell Nic Sheff’s story beautifully... now it’s even better knowing that Amy Ryan plays his mom bc it means Holly and Michael from the Office are his parents."

Beautiful Boy, which was directed by Felix Van Groeningen, is certainly a depature in tone from The Office, and if Chalamet's 2017 movie Call Me By Your Name depleted your supply of tissues — I'm tearing up just thinking about it — you might want to stock up before watching this one.

The trailer starts with David and Nic at lunch, where they begin arguing about Nic's addiction. Nic then goes missing and his dad frantically looks for him. The preview is intercut with scenes from his childhood and happier moments with his family. "There are moments that I look at him, this kid that I raised, who I thought I knew inside and out, and I wonder who he is," David says.

Chalamet comitted fully to the role, revealing in a June 2017 conversation with Matthew McConaughey for Interview magazine that he'd undergone a physical transformation. "I’m playing a heroin and methamphetamine addict," he said. "I lost weight to help accurately capture the dark stages of the drug. I’ve been getting to work with Steve Carell and just feel like the luckiest kid in the world."

In a February, Chalamet spoke with Frank Ocean for V Man, and told the musician that he had a coach on set to help him accurately portray the intricacies of drug addiction. "I did a movie called Beautiful Boy this year that involved a lot of drug sequences, and that also felt very important to get right," he said. "I had a consultant on set for that." Chalamet added, "It felt like a big responsibility to get that right. The movie is about addiction, and to get the actual using wrong would betray anyone’s experiences walking that path. It was very helpful."

Fans will get to see the fruits of Chalamet's labor, and Michael and Holly's on-screen reunion, when Beautiful Boy hits select theaters on October 12.