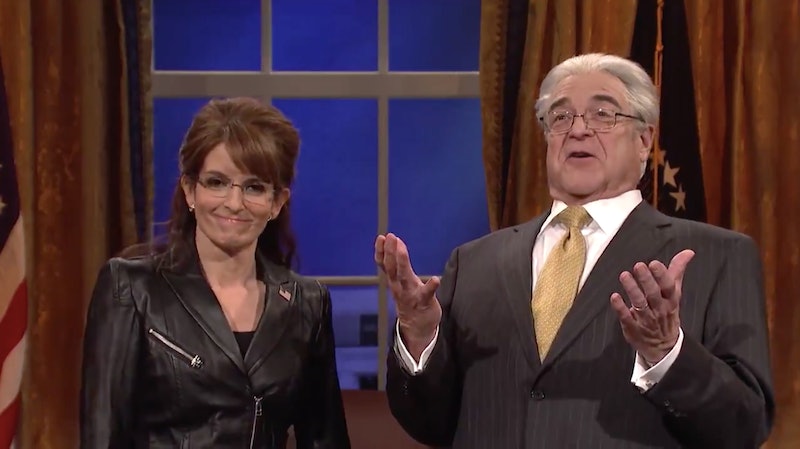 Even though Tina Fey's Saturday Night Live monologued called attention to the show's recent reliance on celebrity cameos in political sketches — there was not one, not two, but three segments of the show that included surprise familiar faces. The third time was definitely the charm, as Tina Fey's Sarah Palin song on Saturday Night Live welcomed fellow Republican women and men to reflect upon Trump's America together.

"Enjoy your moment," she advises those in the Trump White House. "Who knows how long it'll last?" Singing a parody of "What I Did For Love" from the musical A Chorus Line, Palin and some former Trump administration members reminisced on what they'd done with for, or would do for the President. The company included John Goodman returning as Rex Tillerson, Aidy Bryant as Sarah Huckabee-Sanders, Fred Armisen as Michael Wolff, Kate McKinnon as Kellyanne Conway, Leslie Jones as Omarosa, and Cecily Strong as Stormy Daniels.

Quick background — in A Chorus Line, this memorable and heart-wrenching song is about how dancers and performing artists have to accept that one day they'll be too old or too injured to keep doing what they're doing and will have to move on with only the memories of their own creative fulfillment.

It's fitting for this parody because, as the fictional Palin says in the sketch, "Politics is a wild ride. One minute you're on top and then you're gone in the blink of a Scaramucci." Memories may be all that certain ex-members of this administration have left. The characters in the Broadway musical are asked what they would do if they had to stop dancing, and Palin asks her fellow Republicans what they would do if this was their last day, as well. Watch a segment of the sketch below.

"Funny how we're both named Sarah," said Bryant's Huckabee-Sanders to Fey's Palin, "when we're both classic Beckys." Other jokes in the sketch referenced Saved By The Bell, open Fox News commentator positions, a claim that Jared Kushner and Ivanka Trump might actually be the same person that rivals the wildest Westworld Reddit fan theory, and for some reason McKinnon was flown in from the rafters.

Want another dose of political impressions? Here's the now usual suspects (also known as the cast of Meet The Parents) in the episode's Cold Open, doing a Trump-ian parody of the series finale of The Sopranos, confusing blackout and all. What does it mean?

The monologue was star-studded as well, with celebrities including Jerry Seinfeld, Anne Hathaway, Benedict Cumberbatch, Chris Rock, Tracey Morgan, and Donald Glover/Childish Gambino. As mentioned above, Fey discussed with both Seinfeld and Fred Armisen whether or not the cameos were taking too much attention away from the established ensemble cast... but whaddya know, they did it anyway and doubled down at that.

"Nothing wrong with doing Dancing With The Stars," quipped Fey as Palin as the song concluded. "Just don't do a quickstep in the first week. It's too darn hard!"

The Sarah Palin sketch not only marked the return of a beloved impression and served as yet another deep cut musical theatre reference (they're becoming more and more frequent these days, as jazz square enthusiasts may have noticed), but it's a somewhat lighthearted take on the revolving door in Washington DC under this administration. Government positions can really be fleeting in this day and age. Some will forget and some will regret what they did for Trump. As Fey noted at the top of the sketch — if she introduces herself as the "ghost of Sarah Palin," you really have to think for a second to remember that.

More like this
Keke Palmer Just Announced She's "Going To Be A Mom" On 'SNL'
By Brad Witter
The 'Kenan & Kel' Reunion On 'SNL' Took A Dramatic Turn, Thanks To Keke Palmer
By Brad Witter
Who Is Pete Davidson Dating? He "Courted" Emily Ratajkowski At A Knicks Game
By Jake Viswanath
Chloe Fineman Revealed Friends Who Date Pete Davidson "Report Back Nice Things"
By Stephanie Topacio Long
Get Even More From Bustle — Sign Up For The Newsletter