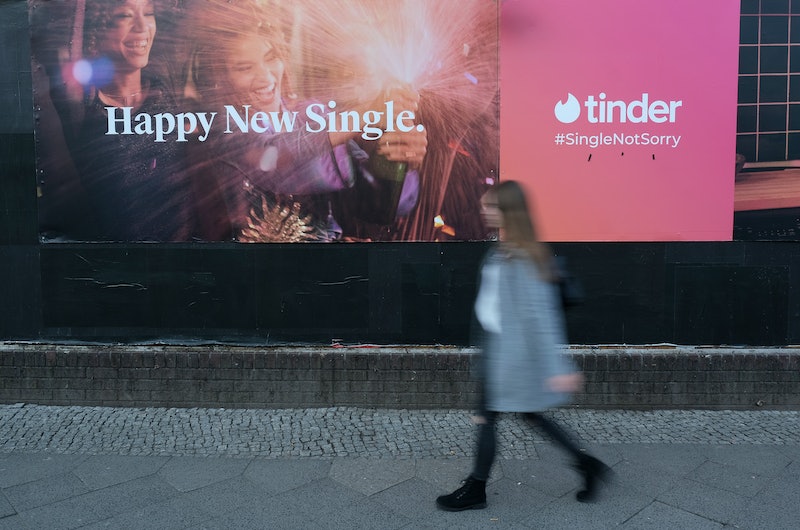 It might be 2019, but there are still dozens of countries with anti-LGBTQ laws. In an effort to equip its users with all the information they need to stay safe, Tinder's new Traveler Alert will notify LGBTQ users when they're in an area with discriminatory laws. The safety feature, which can protect users from being targeted based on their sexual orientation or gender identity, is rolling out on the app for iOS and Android users soon.

According to Tinder's press release, data collected by the International Lesbian, Gay, Bisexual, Trans and Intersex Association (ILGA World) helped make the feature possible. ILGA World is a "worldwide federation of 1592 member organizations from 155 countries campaigning for lesbian, gay, bisexual, trans, and intersex rights," per its site. Specifically, it gave Tinder information on where and when to deploy this alert, based off of data from its latest State-Sponsored Homophobia report.

The press release explains that the alert will show up for users who open the app when they're in a country that "criminalizes LGBTQ status, as well as if they are using Tinder’s Passport feature to connect and match with people anywhere in the world." The app will also ensure that any users who identify as LGBTQ will have the option to decide whether they want their profile hidden or public as long as they're in that country.

And even if users do want to keep their profiles public in order to connect with other people, the app will still keep the information about their sexual orientation or gender identity private until they leave the dangerous area. The press release explains, "Once users have left the country or changed their location, then they will be visible again on the app."

The Tinder Traveler Alert will appear to LGBTQ users in the form of a message that takes up the full phone screen and reads in part, "Based on your geographical location, it appears you're in a place where the LGBTQ community may be penalized. We want you to have fun, but your safety is our #1 priority." The user will then be given the option to stay private on Tinder, or make their profile accessible.

In a statement in Tinder's press release, Eli Seidman, CEO of Tinder, explained the reasoning behind this new effort to keep LGBTQ users safe while traveling. Seidman wrote,

We fundamentally believe that everyone should be able to love who they want to love — and we strive to reflect this in everything we do at Tinder. It is unthinkable that, in 2019, there are still countries with legislation in place that deprives people of this basic right. We serve all communities — no matter their gender identity or sexual orientation — and we are proud to offer features that help keep them safe. This alert is an example of the many steps that we are taking to protect our users around the world.

We hope this development will raise awareness amongst all Tinder users, and help protect people of diverse sexual orientation in the 69 countries around the world that currently still criminalize same-sex love... We work hard to change practices, laws, and attitudes that put LGBTQ people at risk — including the use of dating apps to target our community — but in the meantime, the safety of our communities also depends on supporting their digital safety.

If you want to build upon Tinder's new initiative to keep LGBTQ travelers safe, you can consider supporting ILGA World directly. By donating to its organization, you're helping to support the international effort to protect LGBTQ rights and status in every country. You can also tell all of your Tinder-loving friends about this new traveler alert initiative, so that they know the resource is available to them when they travel.