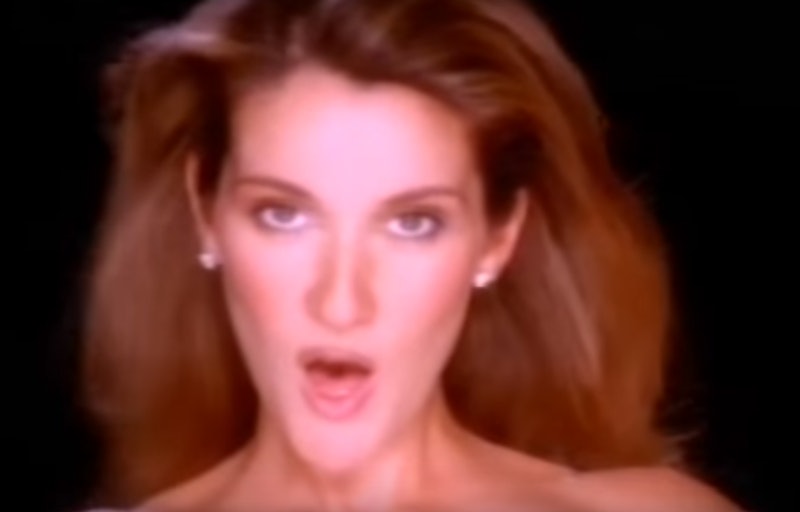 Though some of us would love to swear otherwise, many of us encountered the emotional finale of Titanic in the exact same manner: clutching a tattered bundle of Kleenex while practically hyperventilating through tears. The tense final hour of the movie, defined as it was by so much tragedy, death, and mournful odes to lost love, was relentless in it's emotional provocation. Regardless, we should have all been able to get ourselves together by the time the end credits rolled, but we couldn't. And that's because Titanic's power ballad, "My Heart Will Go On," gave audiences one last sucker punch to the soul that made pausing those tears a complete impossibility.

In fact, they were emotions that none of us could relinquish long after we'd seen the movie, either. Every time we'd hear "My Heart Will Go On," we'd be reminded of Jack and Rose's tragic love story and immediately tear up again. The song became our very own Heart Of The Ocean, proving that we simply couldn't let go of Titanic, or any of the embarrassing hysterical emotions it conjured up in us.

An undoubted musical phenomenon, the song remains one of the best selling singles in history and even won the Oscar for Original Song in 1998. However it also marked the beginning of the end for movie power ballads. Hitting their stride in the '80s and '90s with songs like "Up Where We Belong," from An Officer And A Gentleman in 1982, "It Must Have Been Love," from Pretty Woman in 1992, and "I Will Always Love You," from The Bodyguard in 1995, the power ballad was over by the end of the early '00s. Sadly, it still remains a near-extinct musical tradition, and one that possibly says as much about our society as it does the modern movie and music industry. So, why don't movies have power ballads any more?

In an interview with Empire magazine, Kathy Nelson, president of film music at Universal, explained how the movie power ballad may have become over-saturated within the industry. Reasoning that such songs were originally created "with a pure reason," to "leave the audience with one final statement," Nelson revealed, "once something works and helps box office, it starts being abused. There were songs that were not necessarily meaningful to the movie, or were not really very good. It became something that you had to do." Which likely explains why a ridiculous family movie like Space Jam got it's very own unnecessary power ballad in 1997 with R-Kelly's "I Believe I Can Fly." Which, today, would be like the equivalent of hearing John Legend performing an emotional power ballad for The Emoji Movie or Captain Underpants. Yeah — it would be pure lunacy.

However, we might also have our own generation to blame as to why the movie power ballad is a near-dead art form. In Billboard's oral history of "My Heart Will Go On," actor Billy Zane proposed the idea that the song, and movie power ballads like it, are unfashionable due to modern cynicism. "The song is an easy target for postmodern ­millennial hipster angst," Zane reflected, "Why? Because it’s sincere? It’s the rarest of things: It’s quality."

While your instincts might be to simply throw this assertion into the burning, garbage pile of things that millennials could be blamed for, Zane might actually have a point. More often than not, millennials enjoy the emotional candor of a song like "My Heart Will Go On," only for irony's sake. Go to any karaoke bar with young clientele, and you'll see Zane's point in action, with some tattooed 20-something gleefully butchering a power ballad over a round of whiskey sours. "I would like to hear more power ballads," Zane enthused at the end of his statement, "more power ballads, I say!" And his zeal for these songs is something we could all do with at least a little of. Are such performances of sincerity really so embarrassing to our generation? And can the movie power ballad ever make a genuine return?

There are certain defining characteristics that define a movie power ballad which you should know about before we continue. Firstly, they usually feature lyrics that vaguely relate to or reference a movie's plot, but not entirely. This means that the song should bear the emotional weight of the movie without it being a literal embodiment of the content. In "My Heart Will Go On," for example, the song's title and rousing chorus can be taken to be a reference to Rose's Heart Of The Ocean. Though Celine Dion never once states, "I'll never let go," in the songs lyrics as Rose does to Jack after his death, the sentiment is implicit, regardless. As a result, the song works as a musical extension of the movie, but also as a standalone piece of music. One that people can relate to their own romantic endeavors.

Movie power ballads are also usually longer than your average song and generally exceed the three minute mark. They feature soft intros and colossal finales, such as Aerosmith's "I Don't Want To Miss A Thing," for Armageddon, which begins with an orchestral rendering of the melody, and ends with singer, Steven Tyler howling like an impassioned banshee. And to complete the overall vibe, movie power ballads also usually have an accompanying music video smartly edited to include vague snapshots of the movie's most notable, and emotional, moments.

In the past decade, there's only really been three distinctive songs which fit those characteristics in some way, and two of those were for James Bond films: Adele's "Skyfall," in 2012, and Sam Smith's "Writing's On The Wall," for Spectre in 2015. Both start small and end big, and lay down simple narrative motifs from both respective movies within the lyrics. With these two songs alone, you could argue that the movie power ballad has been making a slow return since Adele hit those notes in 2012. And if you want further proof that this may be the case, and that millennials might actually have a heart underneath our ironic karaoke performances and cool exteriors, then you need only look to one of 2015's biggest hits: Wiz Khalifa and Carlie Puth's "See You Again," from Fast And Furious 7.

Commissioned for the 2015 movie as a tribute to the late Paul Walker, who died while Fast & Furious 7 was still in production, the song has all the hallmarks of a classic movie power ballad. It starts soft, with gentle piano over Puth's delicate vocals, and ends big with a rousing, wordless vocal line. Between Puth and Khalifa's lyrics, the song also drops vague, emotional references to the importance of "family," (a recurring motif in the franchise,) and like "My Heart Will Go On," the song also acts as an ode to the immortal power of love. Walker might have passed, just as his character, Brian, might have "retired," within the movies themselves, but both will continue to live on in the hearts of their extended Fast & Furious family, and the movies themselves. All ideas which the rap ballad provided a powerful, emotional extension of.

Considering that "See You Again," was the best selling song of 2015, with combined sales and streams amounting to 20.9 million units worldwide, it feels safe to assume that movie power ballads could be ready for a comeback. One that our generation might actually sincerely be ready for. In a 2015 interview with Billboard, Puth even proudly declared, "We brought the power ballad back. It's a big, uplifting song anyone can connect to." And, he's right. Even the most angst ridden hipster millennial, delivering an ironic karaoke cover of the song, has likely connected to "See You Again" on a genuine level, too.

The point is that the movie power ballad clearly isn't as dead as many of us likely assumed. And for those of us who still sincerely croon the lyrics of "My Heart Will Go On," or aren't too cool to admit they dabbed a tear away the first time they heard, "See You Again," over the Furious 7 finale, the power ballad will always be here in our hearts, and our hearts will...well, you know the rest. Bring back the power ballads, guys. We're sincerely ready.