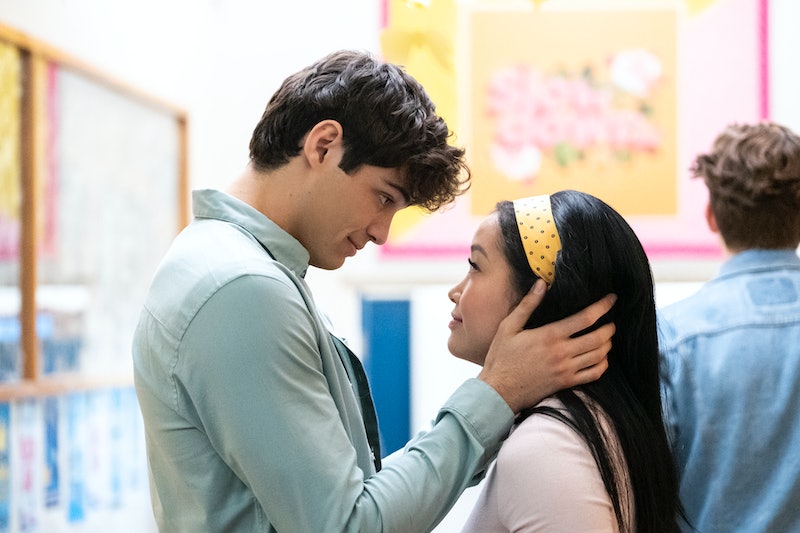 Two teenagers are making out in a conveniently roomy Jeep after a night out. And just when the driver starts trying to unbutton the passenger's dress, she stops him. "I don't want to have sex with you right now," she says. In a typical onscreen high school romance, you might expect the guy to start acting defensive, or worse, kick the girl out of the car à la Elton in Clueless. But in To All The Boys: P.S. I Still Love You, when Lara Jean blurts out that she doesn't want to have sex, Peter Kavinsky immediately backs off. "Did you feel like I was rushing you?" he asks. In this scene, P.S. I Still Love You doesn't just recognize consent, it normalizes it.

Consent has always been on the forefront of To All The Boys. The story's entire conceit revolves around a fake relationship contract, full of carefully set boundaries for their physical relationship, as dictated by the more inexperienced Lara Jean, who unlike Peter, is a virgin. And over the course of the film, any and all intimate moments are on her terms. Like when she agrees to let Peter put his hand in her back pocket instead of kissing her, or when they have their first *real* kiss — in a hot tub on a ski trip — it's she who initiates it.

It may seem small, but this kind of normalization of consent is rare in teen films or TV shows. On screen, sex and the decision to have it usually goes one of two ways for teenage characters in heterosexual relationships. Either the guy typically pushes for sex and calls all the shots, like Jess on Gilmore Girls, who wasn't respectful of Rory's desire not to lose her virginity at a friend's house party; or there's no discussion about consent and comfort at all, the sex just magically happens, like Seth and Summer on The O.C.

But in P.S I Still Love You, we get to see two teenagers just talk about sex in a really awkward, really respectful way. They establish their boundaries and what they do, and don't, feel ready to do. "The conversation around consent is really important, and having it be a continual conversation is essential," author Jenny Han told Hello Giggles of why she decided to put it at the forefront of the series.

In Lara Jean and Peter's conversations about their physical relationship, never once is she belittled for having less experience. Her virginity also isn't treated as something precious. Instead, they both want to ensure that when the time comes she's ready for it. "I don't want to rush you. Especially not in a parked car, in front of your house," Peter tells her in the Jeep. And those around her also want to make sure that when she chooses to have sex, it's because she wants to. "Know how to rev your own engine [before]," is the advice her best friend Chris gives her on the subject, prioritizing Lara Jean's pleasure. And even Lara Jean's dad gives her a brown envelope full of condoms, urging her to practice safe sex.

Seeing two high schoolers talk about sex and consent in such a frank, straightforward, and, yes, ordinary way, gives teen audiences a refreshing model of not only how to clearly express their needs and desires, but also to know how they should expect their partners to respond. There's no affirmative consent without communication. And luckily that's something Peter Kavinsky and Lara Jean Covey both know.