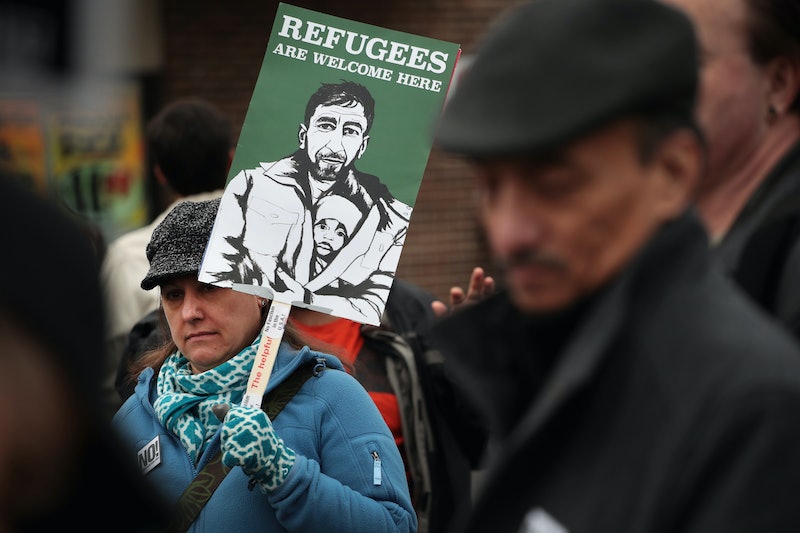 Not everyone loves Valentine's Day. The most supposedly romantic day of the year can feel like a corporate conspiracy to trick you into buy mediocre candy and cheesy cards. However, the campaign and hashtag #ToImmigrantsWithLove is shifting the Valentine's Day gaze from heteronormative expressions of love, towards expressions of solidarity with immigrants both locally and globally.

The #ToImmigrantsWithLove initiative is recruiting participants across the U.S. to write letters, share photos, and type out tweets expressing solidarity and appreciation for the nation's immigrant communities. Both the website and hashtag were launched by the immigrants rights advocacy groups Define American and I Am An Immigrant with the hopes of boosting visibility and unity for immigrant communities and their allies across the country.

The significance of this campaign is pronounced given Donald Trump's recent executive order, which blocked the entry and travel of visa holders from Iran, Iraq, Libya, Somalia, Syria, Sudan and Yemen for 90 days. It also indefinitely halted the intake of Syrian refugees.

A Seattle-based federal judge James Robart made a ruling temporarily blocking the ban. Following Robart's temporary block, the case went to the United States Court of Appeals for the Ninth Circuit. Last week, the three-judge panel ruled against Trump's travel ban, effectively siding with Robart's ruling in the sentiment of not re-implementing the travel ban.

While this is a victory for refugees and their allies, there is still a possibility Trump will appeal the case to the Supreme Court. So now, more than ever, the sentiments expressed in the #ToImmigrantsWithLove hashtag garner emotional significance.

If you feel comfortable posing in front of your camera phone, the To Immigrants With Love website also encourages participants to make videos of themselves reading their letters of love and support. Many of the posts are dedicated to close family members — grandparents and parents who emigrated.

The hashtag has also done a great job naturally highlighting just how many celebrities and politicians are first or second generation immigrants. This infers a lot about what the United States would lose without immigrants.

Organizers of the initiative have also created a sign-up list so that people can consistently receive updates on immigration rights issues, as well as actions they can take to support immigrant communities.

If you're feeling disenchanted with the traditionally romantic expressions often attached to Valentine's Day, scrolling through or contributing to this hashtag serves as a solid, equally sentimental yet politically-engaged alternative.

Regardless of whether you're a first generation immigrant or your ancestry traces far back, hopefully this reminds you to appreciate the community surrounding and supporting you this Valentine's Day.