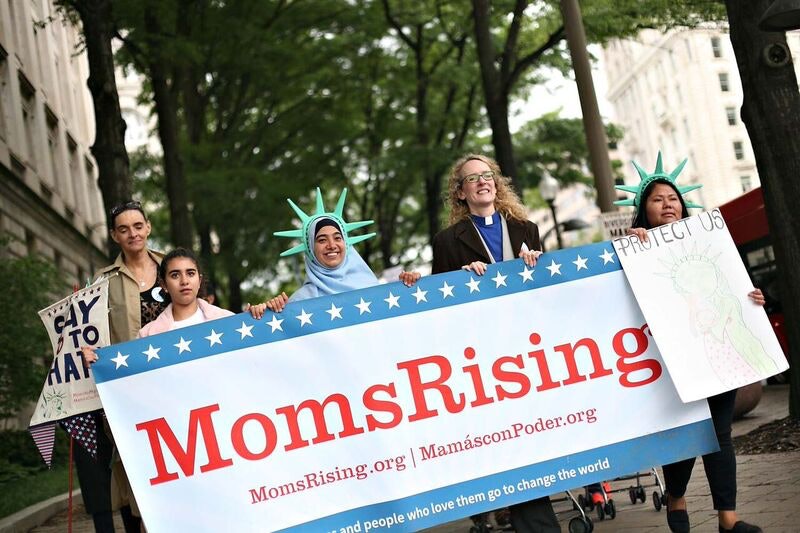 "In many ways, poor health coverage led to my mom’s death in 2010," wrote Sarah Alcid. In Idaho, her family struggled to pay for the premiums of what she described as a "catastrophic coverage" plan. When her mom needed to see a doctor, Alcid wrote, she refused to go because the copay was unaffordable, and she was afraid her premiums would increase if she actually used the insurance.

"When she eventually visited a doctor, she was diagnosed with cancer that could have been easily prevented if she had received medical care at the first signs she needed it," Alcid wrote. "When she needed cancer treatment, her extremely poor health coverage presented endless barriers to obtaining high-quality treatment, from the high deductible, high co-insurance rates, and caps on hospital stays — to the repeated denial of the 'medical necessity' of cancer treatments. It was infuriating and devastating and meant that her cancer returned three times, each time harder to treat and survive."

Alcid's story is just one of many gathered by advocacy group MomsRising in its fight against the American Health Care Act (AHCA). The grassroots network of mothers that spans the country was established in 2006 and has championed a number of causes, including paid maternity and paternity leave and affordable childcares. Now, MomsRisings' sites are set on the AHCA.

The AHCA is "bad for women, for children, for families, for our economy, for our country, and for anybody who has ever had a mom. It's really just a shortcut to unfairly charge women more for health care," MomsRising Executive Director Kristin Rowe-Finkbeiner tells Bustle.

Preventing the AHCA from becoming law is a high priority for MomsRising because, Rowe-Finkbeiner says, the bill would be especially catastrophic for mothers and children.

"It has a domino effect on families itself," Rowe-Finkbeiner says. "Reproductive health care, which has been in the news and on the chopping block, is incredibly important for women and for moms. Having a baby costs $200,000 right now, from birth to age 18, and that's not including college. So being able to choose when and how many children to have is critical for women's economic security. And when you take away people's access to reproductive health care ... that really limits women's economic stability and family economic stability, too."

Thus, while the country waits for the Senate to weigh in on the AHCA, MomsRising is actively campaigning against the bill by using a personal approach, making sure lawmakers hear the stories of the people whose lives may drastically change for the worse under it.

Rowe-Finkbeiner calls MomsRising an "accidental media powerhouse." According to Rowe-Finkbeiner, they have more than a million members across all 50 states, 2,000 bloggers, an audience of 5 million and a nationally syndicated radio show. But while it's reach is wide, its methods are still decidedly grassroots. Moms Rising members still write letters to the editor of their newspapers and challenge representatives at town hall meetings, but they have managed to mobilize a country-wide, passionate group to do those old-school, yet effective things.

"We immediately started delivering those stories to members of Congress, many of whom have never had to grapple with health care coverage before."

And, perhaps the groups' greatest strength, MomsRising knows how to prepare. The organization has been planning its defense of the Affordable Care Act (ACA) since November.

"The moment Donald Trump won the presidency, MomsRising started collecting stories on how the ACA had helped families, had helped women," says Rowe-Finkbeiner. "We immediately started delivering those stories to members of Congress, many of whom have never had to grapple with health care coverage before."

Those MomsRisings stories included Amy Krohn's"I fought back tears as I tried to wrap my mind around it — recognizing that more bills would soon arrive in my mailbox for the hospital stay, surgeon’s fees, and more. Then it hit me: This was our new reality.", whose daughter Addie was diagnosed with Type 1 diabetes at age 6. Before the ACA took effect, Krohn couldn't find any company in her home state of Ohio willing to insure her family, because of her daughter's illness and the expensive treatments it requires.

"I fought back tears as I tried to wrap my mind around it — recognizing that more bills would soon arrive in my mailbox for the hospital stay, surgeon’s fees, and more. Then it hit me: This was our new reality."

They include an account from Nancy Glassman of Maine, who found out when she was diagnosed with breast cancer in 2011 that the expensive insurance plan she had been carrying would leave her hundreds of thousands of dollars in debt after her treatments. According to Glassman, she was able to switch plans and avoid a mountain of medical debt only because the ACA prevented insurers from turning down patients due to pre-existing conditions.

There's also the story of Cyndi Johnson of Indiana, who after giving birth to a baby girl with Down syndrome needed to quit her job to take care of her newborn child, cutting her family's income in half while also contending with, what she wrote, were "astronomical medical expenses."

I remember standing at the mailbox with my tiny baby (still under 10 pounds at 11-months-old!) cradled in my arms and opening an envelope from the children's hospital with a bill inside for $64,00 — more than my husband’s annual salary — for merely "renting" the surgical room and equipment used during her heart surgery the month before. I fought back tears as I tried to wrap my mind around it — recognizing that more bills would soon arrive in my mailbox for the hospital stay, surgeon's fees, and more. Then it hit me: This was our new reality.

"MomsRising members in every state in the nation, every congressional district, have been raising their voices about the absolute importance of health care for everyone," Rowe-Finkbeiner says.

These stories are at the center of the group's strategy to deter senators from supporting the health care bill. Rowe-Finkbeiner says that when politicians are confronted with their constituents' stories, it does get their attention.

"When you share stories, people do listen. When we share the stories of our members, or when you share your own health care story, it has an incredible impact," Rowe-Finkbeiner says. "Many of the more extremist members of Congress say they didn't even read the bill. So, when they hear these stories, about how people would be impacted by the bill, it actually really does make a difference."