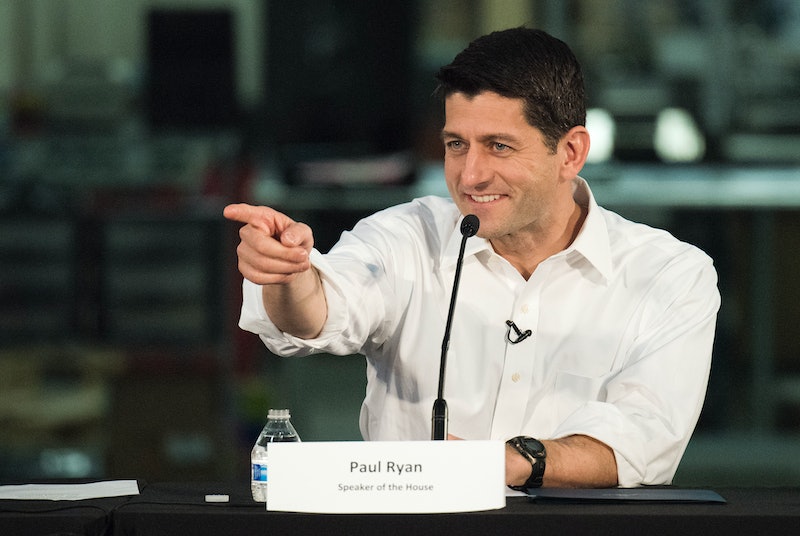 Some of the proposals coming out of the Trump administration and the bills floating around in Congress have been so callous toward a full half of the population that it makes me think that maybe these guys have actually never met a woman. The male politicians policing female bodies seem so out of touch and so ruthless in their effort to control women, seemingly without any consideration of how their ideas actually affect women.

I'm sure these politicians are too deeply entrenched in their ideology for this to matter, but in a perfect world, perhaps things would be better if they just had the opportunity to, like, speak to a woman, or hear what a woman has to say about the laws they're attempting to enact. But just in case it matters, here's what I have to say to them:

One of the first experiences that most women have of physically being female is when we get our periods. Most of us dread it before it happens and then feel mortified when it does come, so we do everything possible to hide it. The normal, healthy things that female bodies do aren't to be discussed publicly — we know that instinctually, perhaps because it's been drilled into us for millennia. Women as "the Other" goes back to the Bible — and it trickles down to us.

In the summer after eighth grade, a planned group trip to the pool happened to coincide with my period. I couldn't risk wearing a pad in a bathing suit or going without one, and I hadn't quite figured out tampons. I had to claim that I was too sick to go swimming, mortified by the idea that someone would figure out why I was actually skipping it, and awkwardly face all of the questions people threw at me. I'm sure we all have a story like that.

Around the same time, we start running into dress code rules about how short our skirts can be and how wide the straps of our shirts must be. We start hearing advice on how to keep ourselves safe — hold your keys between each finger when you walk to your car, don't leave your glass alone, don't walk home without a man. This implies that we're all powerful, able to drive men crazy with a single glimpse of our uncovered shoulders. So, our bodies have to be hidden — but we also have to learn to protect our bodies, lest some man be overcome by our tank top or our flirty dress.

And then comes the issue of birth control, if (god forbid!) we should decide that we want to have sex for a purpose other than procreation. Men have condoms, and technically we do too, but if you want long-term birth control, it falls on the woman to figure out which variety works best for her, potentially going through several that come with less-than-ideal side effects. When I, after hours of research, went to my primary care doctor and asked for an IUD, he blustered around saying that I couldn't get one before I'd been pregnant, gave me a prescription for the Pill, and then told me that side effects could include mood swings, but he didn't know if that was an actual side effect of the Pill of if it was just because I was in a relationship.

It didn't matter that I'd done the research and knew that I could safely get an IUD even before I'd been pregnant. He ignored me when I said that I was bad at taking a pill every day at the same time, a skill necessary to make the Pill effective. He assumed that I was in a relationship and that relationships cause mood swings in women; I was not in a relationship, and in the moment I decided that that was not information he needed to know.

Can you imagine that? Going into a doctor with an informed idea of what you want, and then having the doctor invalidate you with a string of falsehoods and misguided assumptions? No, of course you can't, because it's never happened to you — and because the invalidation of women with falsehoods and misguided assumptions is something that you excel at.

You ignore the stories of women who have gotten abortions, instead acting like abortions come only as a result of frivolous mistakes and poor decisions. You say you want to limit abortions, but then you don't support policies that actually bring down the abortion rate. You don't support them because that would mean giving out free contraception, and free contraception means that women can actually take a hold of their own sexual agency. You step in to prevent that when you can, siding with religious organizations who want to exert their power and influence over the women in their orbit by limiting the contraception that they're willing to cover in employee health insurance.

The unfortunate fact is that you and your kind are nothing new. Women have been up against men like you for most of recorded history. But you know what? There have been some new winds blowing in the last couple of decades, and they're not blowing in your favor. There are countries where contraception and abortions are freely available, and society hasn't collapsed. On the contrary, countries where women are treated as equal citizens thrive economically and otherwise.

And unfortunately for you, we're finding our voices, and our political power. I can write about my past period shame on the internet, and I can vote for female politicians at the ballot box. While all of these policies you're pushing that are meant to curb our reproductive rights are infuriating, deep down we know that they're your swan song, the end of a very ugly symphony. You can keep trying to pretend to care for us, with your efforts to force your oppressive beliefs onto people who don't share them. But in the end, our bodies aren't going anywhere, and we're not going to stand by while you try to police them anymore.