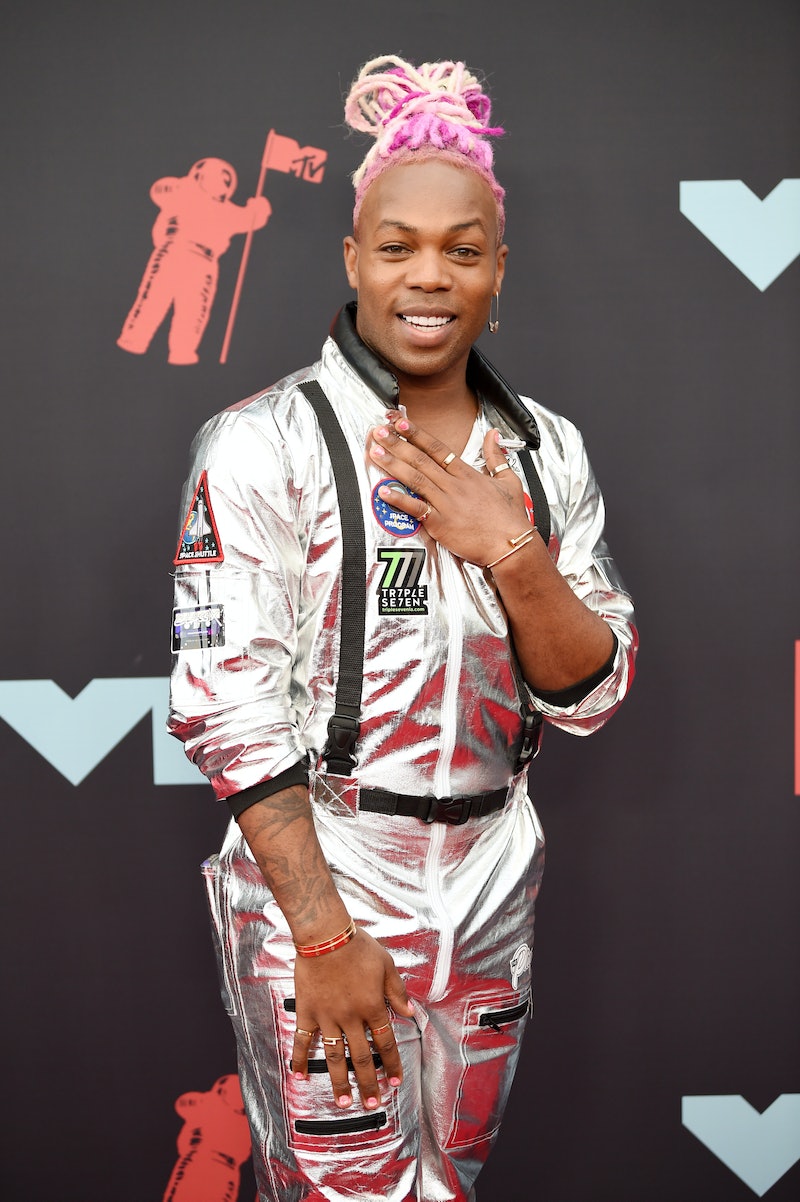 Taylor Swift took home the Moon Person for Video For Good at the 2019 VMAs, but it was one of her collaborators who delivered the acceptance speech, and delighted audiences in the process. Todrick Hall's VMAs speech for Taylor Swift's "You Need To Calm Down" included the best Little Mermaid anecdote and aimed to inspire fans everywhere to be who they are, no matter what.

Hall, who co-executive produced the "You Need To Calm Down" video, has been one of Swift's best friends and biggest supporters for some time, but at the VMAs, it was time for Swift to support him in the spotlight. Instead of taking the mic to accept the Video For Good award for "You Need To Calm Down," whose visuals highlight members of the LGBTQ community, Swift let Hall, a proud member of the community she was celebrating, do all the talking.

"Wow," Hall said after Swift handed him the award. "I grew up in the small town of Plainview, Texas, and my entire life, all I wanted in the entire world was to be Ariel from The Little Mermaid. I put a red towel on my head and tied my legs together, jumped in a pool, almost drowned, and then after that people started to tell me the things that I could not do and could not accomplish in the world. And now, I am just so grateful to be in a world where this is what we need to be doing."

Not only did the crowd love Hall's touching speech, but so did all of the performers on stage — because Swift didn't just bring up Hall to accept the award, she brought up most of the "YNTCD" cast, who helped her open the show with a performance of "Lover." And a few of the celebs who were in "YNTCD" sent their support from afar, like Ellen DeGeneres who tweeted her congratulations, saying, "I'm so happy for @TaylorSwift13 and @Todrick. You really know how to do good."

As for the fans, they were happy to see Swift step aside and let Hall tell his story on the VMAs stage.

Even before MTV started handing out Moon People, Swift seemed determined to give Hall a night he wouldn't forget. On his Instagram, Hall posted a photo of him and Swift getting ready for their big night. In the pic, Hall sat in a comfy looking chair while Swift worked on his nail polish. "Nails, Hair, Hips, Heels. Got my manicure at the Swift Salon to get ready for the #vmas," he captioned the post.

Swift later accepted the award for Video of the Year, where she again brought up her co-stars and co-creators to celebrate. To see her and Hall on stage together was a great reminder that none of these videos were made by one person, they were team efforts. And the fact that "You Need To Calm Down" was made in part by a man who dreamed of being Ariel growing up, well, that's just the icing on the cake.