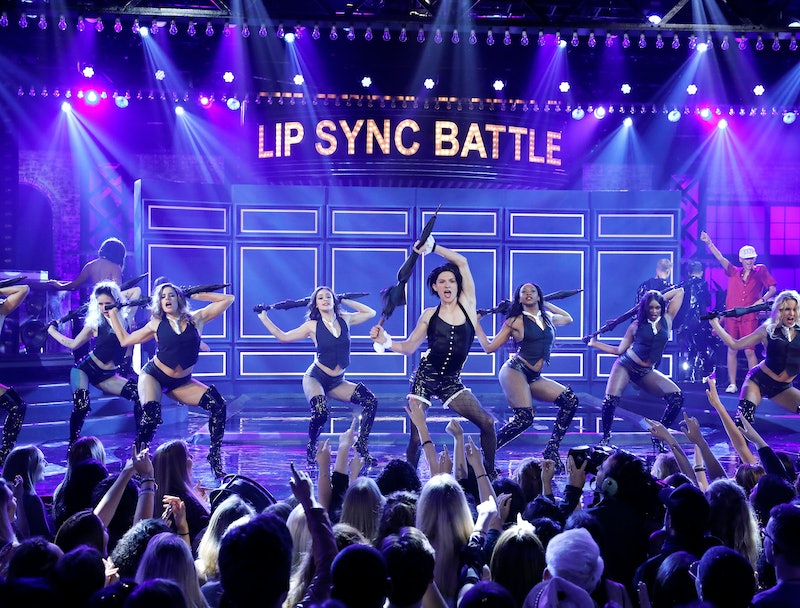 If your Spidey Senses are still tingling, then huddle up, because there's something you need to do: Watch Tom Holland's Lip Sync Battle videos on repeat. The recent Lip Sync Battle episode featuring Zendaya and Holland is definitely worth rewatching now that Spider-Man: Homecoming is finally in theaters, especially so you can witness the spectacular feat of Holland lip-syncing Rihanna's "Umbrella." Because, seriously, you haven't lived until you've seen Spider-Man dropping low on a stage covered in water. And funnily enough, there's still some total Spider-Man style moves left in his performance.

Not only did the 21-year-old's performance really demonstrate just how charismatic and versatile an actor he is, but also how fun. This is especially true when you consider that he recently told People that Holland considered his appearance on Lip Sync Battle to be "more nerve-wracking than Spider-Man," which indicates that he truly went the extra mile to entertain his fans. He suffered for our sins, folks.

With that in mind, it seems only fair that fans continue to celebrate his talents time and again. Plus, his take on Rihanna is dynamite and you probably won't grow tired of watching.

Can we just pause for a second to appreciate this supreme Bobby Dazzler of a move, please? It's serving up Rihanna meets Spider-Man vibes, and it's absolute perfection.

But also, the fact that he psyched us all out at the beginning of his lip-sync with an utterly apt take on Gene Kelly's iconic performance of "Singing In The Rain," only to break out into "Umbrella." It was a touch of genius. But also, damn: This. Guy. Can. Dance.

Of course, none of this is terribly surprising when you learn that Holland has a background in dance and gymnastics. According to the Richmond And Twickenham Times (which is the quaintest newspaper name in the world), Holland used to take ballet lessons in his garage when he was 10 years old, and he went on to star in a production of Billy Elliott: The Musical. A show that, according to an interview with Collider, was where Holland developed his gymnastic side, describing it as, "just one of the skills I learned from there really."

As the final cherry on the already stacked, awesome sundae of Holland's Lip Sync Battle, there's this adorable post-lip-sync interview with Holland and Zendaya. If you don't turn into an utter blast of heart emojis while watching this video, where Zendaya is a total goddess and Holland is all charm, then you clearly have no soul.

Frankly, this is one of the finest gems that the internet has to behold. With his impressive dance and gymnastic skills translating powerfully onto the big screen as Spider-Man, fans can only hope that the actor also finds a project worthy of showing off those dance moves soon. The world is more than ready.