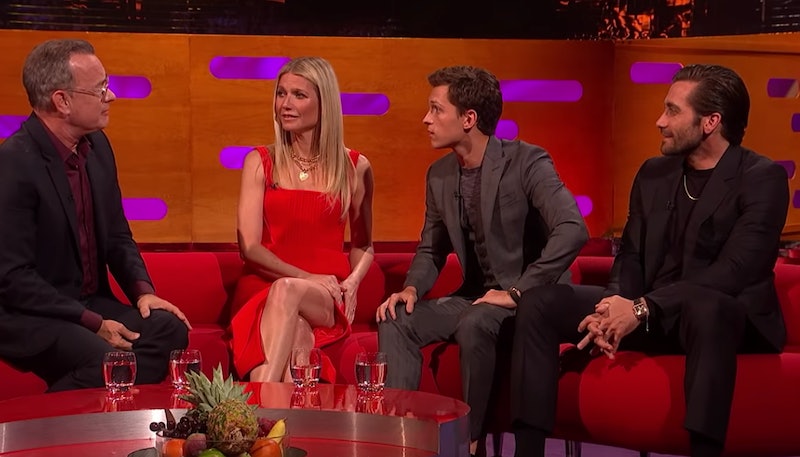 A lot of actors have either taken an acting class or choose to enroll to refine their skills, but Tom Holland — aka the MCU's Spider-Man getting ready to release Spider-Man: Far From Home — was thrust into an impromptu session with two-time Academy Award winner Tom Hanks during a recent appearance on The Graham Norton Show. Tom Holland's acting lesson with Tom Hanks was nothing short of stressful for Peter Parker, which honestly makes sense.

During an interview with Entertainment Tonight on June 24, Holland said that doing what Hanks called "repetitions" on The Graham Norton Show, he was feeling the pressure of performing opposite a seasoned actor like Hanks. “It was really stressful, actually,” Holland said. “No one actually told me that that was going to happen. And when Tom Hanks — the legend that he is — asks you to step up, you better step up!”

Both Hanks, there to promote Toy Story 4, and Holland appeared on Norton's show with Gwyneth Paltrow and Jake Gyllenhaal, who were all there to promote Far From Home, in the episode which aired on Friday, June 21. In one now-viral segment of the interview, Hanks was asked what voice acting is truly like. His answer? Everything is heightened. And everything must be done a million times over — "repetitions" — with slightly different inflections and emotional beats to get out "every possible meaning from a line," so they can probably choose whichever goes best with the animation.

Hanks likened it to being a young actor, and decided to call on Holland to help him demonstrate how, using the line, “Coffee, coffee! Boy, do I need more coffee.” Hanks asked him to repeat the line over and over, each time with different notes. And while many young actors would be elated to get a one-on-one acting lesson from Hanks, Holland was a bit caught off guard. In the video, you can even see the stress sweats kicking in for your friendly neighborhood Spider-Man. But like the trooper he is, he delivered what Hanks wanted, even if it took him a couple of tries to get there. Like the perfect acting student, when Hanks asks for more, you buckle up, say, "Yes Tom Hanks," and get that line out.

“I didn’t want a coffee at all,” Holland told ET about the surprise acting lesson. “That’s how convincing my performance was. But for Tom Hanks, I would drink all the coffee the world has to offer.”

All that anxiety paid off, however, with Hanks awarding Holland top marks on his acting skills. "Bravo, by the way," he said, reaching over to shake Holland's hand. "You know the drill. You know how it works." Sure, it might be scary to have Tom Hanks ask you to act for him on the spot, but impressing a Hollywood icon is definitely worth it.

Of course, Gyllenhaal couldn't let Holland escape from the exchange unscathed. "Why did you do that in an American accent?" he asked the British actor, laughing. Hey, when Hanks wants you to act, you act in any accent you can.