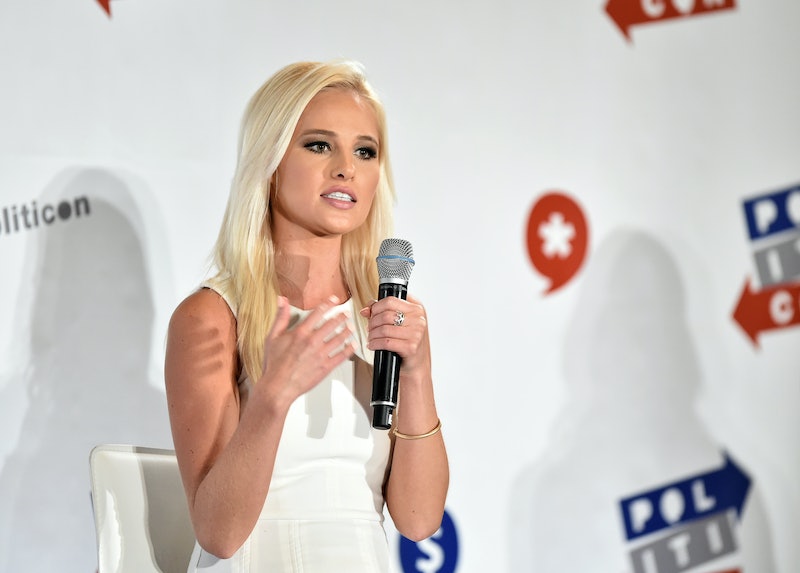 The voice of millennial Republicans just had a major break from her party's position on reproductive rights, earning her praise from liberals and pro-choice advocates. But before you start tweeting about #TeamTomi, it's crucial to consider her political history and the social structures she's actively perpetuated. Tomi Lahren is not a feminist ally just because she's pro-choice, and even though her new position shows some potential growth in her feminist worldview, she has a long way to go before she has a full grasp of feminism.

The controversy centered on Lahren's appearance on The View this week, where she said:

Not long after, she was suspended from The Blaze. Bustle has reached out to The Blaze for comment on the reason behind her suspension.

As several outlets pointed out, this attitude toward abortion is an abrupt and recent change in Lahren's ideology. In a show that aired just three months ago, Lahren ripped on Lena Dunham's problematic comment about wishing she had had an abortion so she could sympathize with those who had. "The 'pro-choicers' are supposed to be about rare and safe abortions. That’s how they avoid sounding like straight-up baby killers," Lahren said in her impassioned monologue. "Then we have Lena freakin' Dunham out there wishing she could have murdered a fetus." The comments don't leave much room for interpretation — Lahren's emphatic defense of anti-choice rhetoric seemed to make her position very clear at the time.

Maybe Lahren has changed her mind and truly come to a more empathetic and compassionate view of reproductive rights. It's entirely possible — she's a young woman who's just starting to discover the world, and her feminism may be starting to blossom in light of her expanding influences. But given all of her past comments, it's still a far cry to call her a feminist ally. Feminism is about a lot more than reproductive rights — it encompasses many of the issues Lahren has railed against on her show, like environmental protections, sexual preferences, gender identity, and racial identity.

Even on The View, she only mentioned the government staying out of her body, and didn't generalize the privilege of reproductive freedom to others. At its core, feminism is an inclusive ideology that Lahren is showing small signs of understanding. Before she can really earn the honorific of feminist ally, though, she's still got a lot of waking up and speaking out to do.

It's not often that a high-profile member of "the other side" crosses the divide, and it can be awfully tempting to change your attitude toward them because of it, but comments have to be taken in their full context before heaping praise on someone. Lahren is more than welcome to demonstrate a fully feminist worldview that acknowledges intersectionality and an understanding of everything feminism includes, but until that happens, she's still not a feminist ally yet.