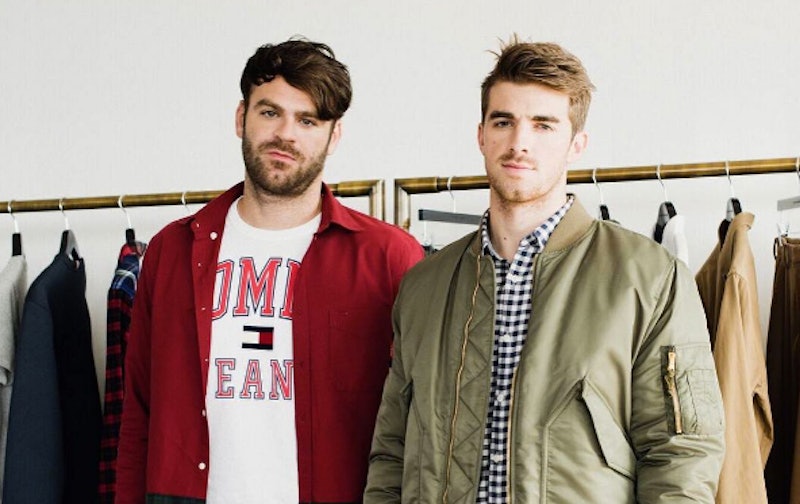 Tommy Hilfiger has collaborated with a long list of A-list celebrities over the years, including Britney Spears and Gigi Hadid. Now, the fashion house is adding The Chainsmokers to that list.

According to the brand's Instagram, Tommy Hilfiger is teaming up with the DJ duo, consisting of Andrew Taggart and Alex Pall, for a clothing line. Not only are The Chainsmokers new global ambassadors for the brand, but they debuted a song to go with the new fashionable status.

In between throwback pictures of Aaliyah sporting her iconic Tommy Hilfiger tube top and Gigi Hadid designing her next release, The Chainsmokers showed up seemingly out of nowhere on the brand's Instagram. According to the posts, the duo will star in the collab's fashion campaign. That's right. They just didn't design the clothing; they're modeling them, too.

The brand currently has a selection of the Tommy x The Chainsmokers clothing releases on their website. The round-up includes color-blocked sweaters, button-up shirts, and even a tailored suit jacket.

“Tommy Hilfiger has been a part of our upbringing," Pall tells Teen Vogue. "It has been a brand that we have always come back to, through all the phases that we have gone through — from kids growing up to this point right now. So, it is really crazy, but it feels really right."

In the video for the tune, the pair wears a sweater with a collared shirt underneath and a plaid, patched button-up.

According to Teen Vogue, the brand has created a green bomber jacket inspired by The Chainsmokers, which is set to launch in the fall collection. In the words of The Chainsmokers, "It is a refined, East-coast preppy look, but also has a laid-back, California vibe.”

There's no telling what other styles will come from the surprising pair. Don't let me down, boys.