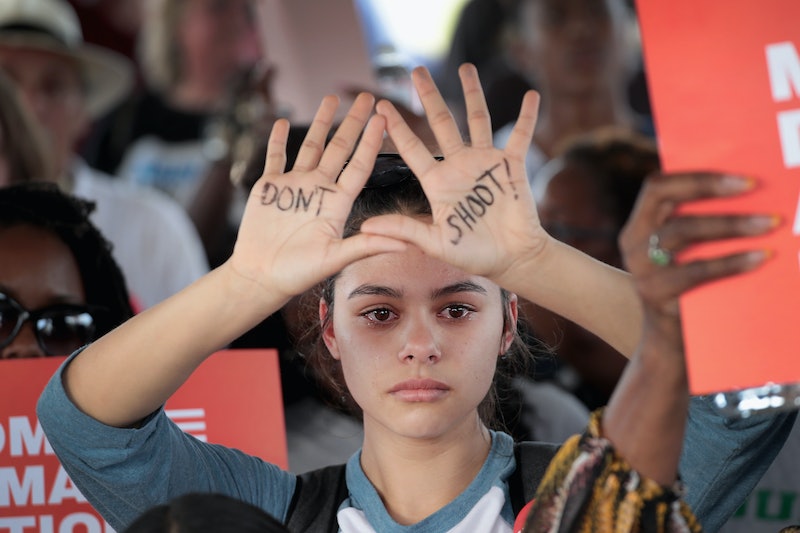 Affecting change can be a time consuming and, unfortunately, expensive process, especially where the federal government is concerned. But this week, one company has decided to help cover costs. On Tuesday, TOMS pledged $5 million to gun violence prevention organizations, and also announced its plan to promote civic activism among its customers.

"I think totally, within my lifetime, I’ve seen a shift in corporate social responsibility," National Student Walkout organizer Winter Minissee, who is working on the campaign, tells Bustle. "Before, lots of corporations and [grant providers] weren't necessarily standing up for issues that could be ... divisive, or had anything to do with politics. It was kind of a forbidden land."

She says that seeing a company tackle a political issue in the face of potential risks and backlash was inspiring, and that she hopes other companies will follow suit. TOMS said in a press release that the money will be split among groups like The Black and Brown Gun Violence Prevention Consortium, Everytown for Gun Safety, Faith in Action, Giffords: Courage to Fight Gun Violence, Live Free, March for Our Lives, and Moms Demand Action.

"We can’t afford to wait, so TOMS is following the lead of activists, students, and organizations and taking action to help end gun violence," Blake Mycoskie, the founder of TOMS, tells Bustle. "We are proud to evolve our giving model and use all of our resources — our voices, our platform and our supporters — to amplify the urgency and do our part to end this horrific epidemic in America.”

In a press release, Mycoskie said that he was "overcome with immense fear" for his own kids "and an understanding that parents across America — especially in communities of color — have been living with that same fear and loss for far too long."

Part of the campaign will include a prompt on the TOMS homepage, which will allow visitors to send a postcard to their representatives, asking them to support universal background checks for gun purchases. Winter tells Bustle that this is exceptionally helpful for young people who'd like to get involved.

"This is something super amazing, especially for young people like me who are not of age to vote," she says, "to really have their voices heard in a tangible matter for the issue of ending gun violence."

Indeed, people under the age of 18 have helped lead the charge insofar as gun violence prevention activism is concerned. This was especially true following the Parkland shooting, which took place on Feb. 14 at Marjory Stoneman Douglas High School, and left 17 students and staff dead. Student activists were emboldened after the shooting, spearheading the National Student Walkout, followed by the March for Our Lives.

TOMS has long made charity part of its business model, and although the company's latest endeavor is much more politically charged, data indicates that the vast majority of Americans at least support requiring background checks on firearms purchases. According to a Quinnipiac University national poll released in 2017, as many as 94 percent of Americans believe they should be mandatory.

Of course, financial donations alone can't solve the issue of gun control. It's going to take some interpersonal work, too. This is something Winter encourages fellow young people to work on in their communities, especially at this time of year.

"If you’re a young person who's looking to get involved," she says, "I would say, going into the holiday season, use your platform of your family and your friends to really talk about what’s important to you and what you think needs to be done to get to a better tomorrow for everyone."