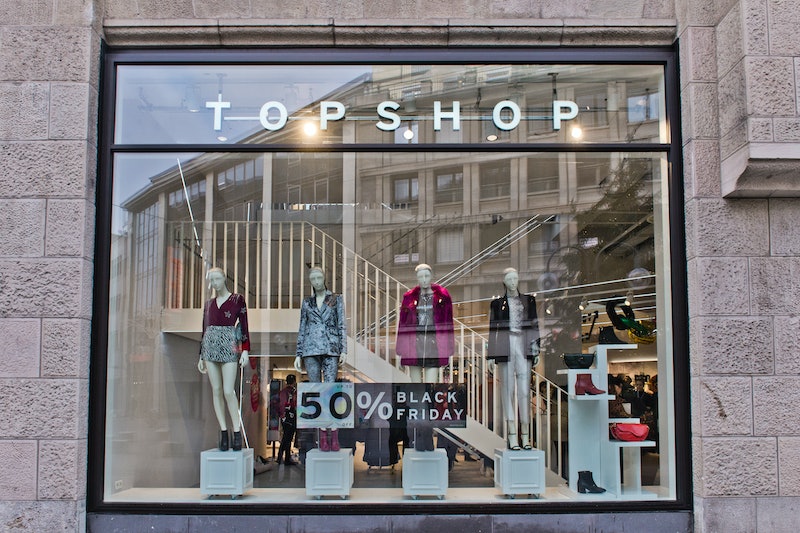 It’s time to bid adieu to UK-based fast fashion retailer Topshop as you know it — at least in the U.S.. The BBC and The Wall Street Journal both report that Topshop will close all 11 of its U.S. stores, including Topman, after its parent company Arcadia Group filed for bankruptcy. Topshop currently operates two stores in Manhattan, along with outposts in Miami, Glendale, Houston, Chicago, Los Angeles, Las Vegas, San Diego, Washington, D.C., and Atlanta. The company will also close 23 stores in the UK and will slash rents at other locations. Nearly 520 jobs are at stake as a result of the closings.

UPDATE: Giles Robinson, a rep for Topshop, responded to Bustle's inquiry via email, noting that Arcadia's wholesale and online businesses in the U.S. operate as part of a different legal entity called TSTM Group. Those businesses "are unaffected" by the filing, and Robinson confirmed "that the brands will still be available in the U.S. online and via its wholesale partners." Therefore, consumers will still be able to purchase Topshop items.

The brand will begin liquidating inventory at U.S. stores as soon as this weekend. However, Topshop and Topman clothing will still be sold online and through other wholesale partners, like Nordstrom, according to Business Insider.

The store closures were labeled a "tough but necessary" measure for the business in a statement from Ian Grabiner, the CEO of Arcadia Group. Bustle reached out to Topshop reps for further information about the future of the brand. There were no mentions of the closings on Topshop's official Instagram or Twitter feeds as of press time — although the news has begun to circulate among disappointed customers.

This shakeup shouldn't come as a huge surprise to fashion watchers and fans of the brand. Both Topshop's sales and its image have struggled as of late. Grabiner pointed to diminishing retail sales, a shift in consumer shopping habits, and increased competition from other stores as additional sources of the company's problems.

Furthermore, Arcadia's billionaire chairman Philip Green faced allegations of sexual harassment, while allegedly making racist remarks and acting in an abusive manner toward employees. While Green denied the accusations, it didn't prevent customers from boycotting the brand in October 2018.

After news of the sexual harassment claims became public, Beyoncé dissolved her partnership with the brand and bought back Green's stake in her Ivy Park athleisure line in November 2018. At that time, a spokesperson confirmed that Beyoncé had "acquired 100 percent of the Ivy Park brand." The singer has since announced that she will rebooting Ivy Park with Adidas as her partner.

Topshop steadily rose to prominence in the UK, thanks to its collaborations with Kate Moss and more. The brand launched its website in 2008 so U.S. fans could finally shop its wares. Topshop expanded into the American physical retail market the following year, and began opening stores in multiple cities and selling its items at Nordstroms over time. Topshop hit its stride in the U.S. when it launched Ivy Park with Beyoncé in April 2016.

The brand enjoyed quite a ride and what's next remains to be seen.