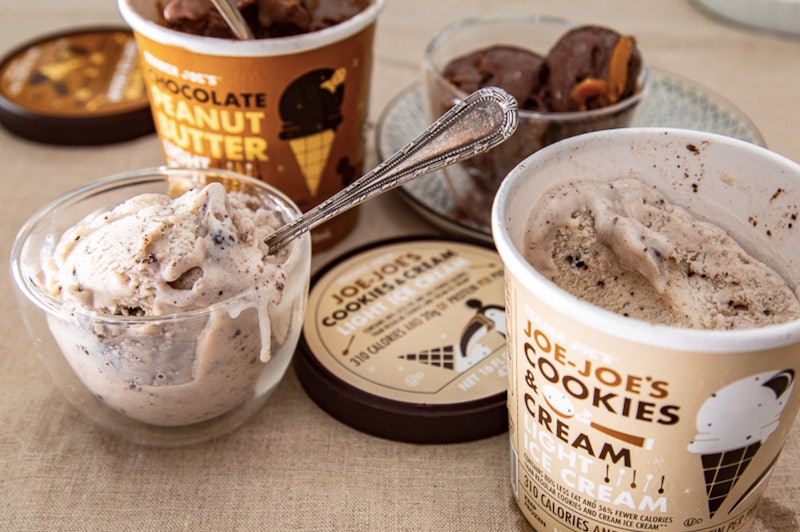 If I had to guess, I would think there'd be quite the overlap between people who like Halo Top ice cream and people who love Trader Joe's. After all, both brands are about treats to enjoy in your own home without spending a bunch of money. Well, now Trader Joe's has its own take on Halo Top, with a new "reduced-calorie, protein-packed ice cream" called Trader Joe's Light Ice Cream.

According to Trader Joe's, the new ice cream is "rich, fluffy, and full-flavored, combining a delicious ice cream base with glorious mix-ins." It comes in two flavors: Joe-Joe’s Cookies & Cream and Chocolate Peanut Butter. No plain vanilla and chocolate around here. (Well, not yet, at least.)

The Joe-Joe's Cookies & Cream has a "sweet, vanilla ice cream base" that is mixed with pieces of Joe-Joe's Cookies. Joe-Joe's Cookies are Trader Joe's take on Oreos. They come in a bunch of flavors, but the ones in the ice cream are the original chocolate cookie with cream filling version. For this flavor, TJ's suggests that those who want to channel the kid party dessert "worms in dirt" add some gummy candies to the ice cream, too.

Moving on to the Chocolate Peanut Butter flavor — it's for any sweet and salty fans out there and features "a creamy, milk chocolate ice cream base with velvety swirls of salty peanut butter throughout." For this one, the company suggests pairing it with whipped cream (such as the Trader Joe’s Organic Midnight Moo) or with peanut butter cups to add even more chocolate and peanut flavor.

The new light ice creams are far from the only flavorful ice creams Trader Joe's sells. At the end of July, the brand introduced an Ube Ice Cream. Ube is the name for purple yams used in the Philippines, and, according to Trader Joe's, this ice cream is creamy, nutty, and sweet, and "some liken it to a cross between vanilla and pistachio, with hints of coconut mixed in." The site notes that it was going to be available for a very limited time, so if you want some, be sure to check your local store soon.

These are only a couple of the frozen treats TJ's sells, so to check out the whole, ever-changing selection, you'll have to head to the store yourself. Thankfully, unlike a lot of products, if you're interested in the light ice creams, Trader Joe's makes no mention of them being around for a limited time. You should be able to grab one for your next movie night whenever you're ready.