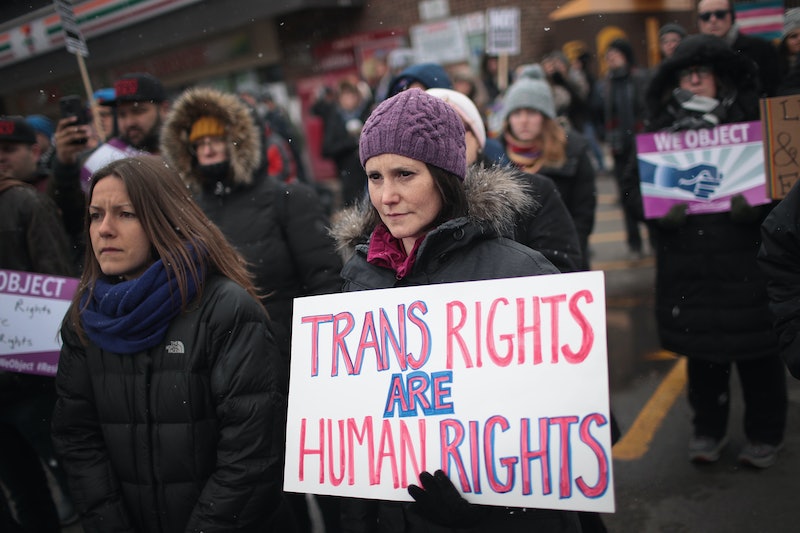 The new data about an uptick in gender confirmation surgeries in 2016 that was released this week may make it seem like the U.S. has become a more accepting place for transgender individuals. But though the data is a sign of progress, some advocates say that 2016 was not a particularly hopeful year for the trans community, citing the election of President Donald Trump and a record-breaking count of the number of trans individuals killed last year.

Gearah Goldstein, a trans rights advocate who conducts sensitivity training, says that she was one of the over 3,000 who received a transition-related medical procedure. For her, it was a necessity. "I don't know a single person who felt like they were correcting something they didn't have to absolutely correct," Goldstein tells Bustle. "What’s worse than going to having surgery? It’s not really a choice."

The uptick seen in the ASPS's data is a sign of increased access to healthcare thanks to the Obama-era Affordable Care Act, according to Kellan Baker, an advocate who works with the LGBT Research and Communications Project at the Center for American Progress. Baker also noted that more insurance companies are covering transition-related medical needs.

"It isn't rocket science to provide care to a transgender person."

"In the past several years, the number of transgender patients I've seen has grown exponentially," Dr. Loren Schechter, the ASPS-certified surgeon who worked with Goldstein, said in a ASPS press release. "Access to care has allowed more people to explore their options, and more doctors understand the needs of transgender patients."

Both Goldstein and Baker tell Bustle that more needs to be done among the medical community in terms of the education of doctors. This will enable an even greater number of trans men and women to access safe care. "There needs to be more training in medical school, residency, and in continuing medical education for health care providers about the health care needs of trans people," Baker says. "It isn't rocket science to provide care to a transgender person, but many health care providers feel like they don't know how to work with transgender patients, and they need training."

But activists say that it's also important to remember than 2016 saw another record-breaking statistic related to the trans community. Advocates counted that at least 22 trans people died in violent killings in the U.S. "The hyper-focused reality on the transgender experience has come down to an increase in violence to our community," Goldstein says. "In 2017 we are on pace to shatter last year’s record."

Nonetheless, Goldstein feels that history is on her side. Citing the current administration's removal of the Obama transgender bathroom guidelines, Goldstein says that while Trump is trying to make life hard for transgender individuals, she feels hopeful. "Allowing hatred and divisiveness to exist is not good for anyone," Goldstein tells Bustle. "But I've lived long enough to know it’s a pendulum. And I can’t wait to see how far the pendulum swings in the other direction."